Roland Kaiser: He has good news for his fans 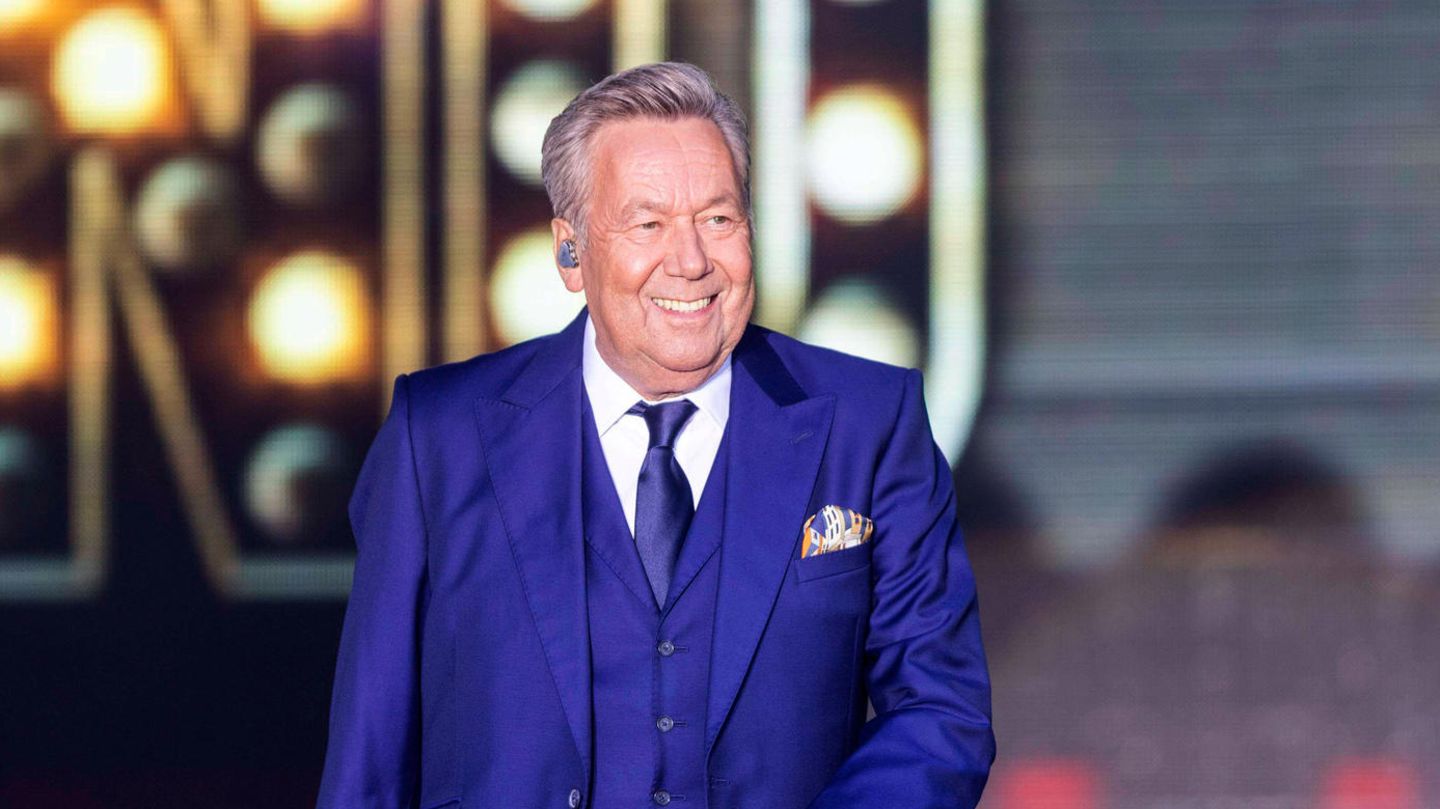 Roland Kaiser delights his fans with a special announcement

“It’s finally that one more time after 3 years,” Roland Kaiser, 70, wrote on Instagram for a video announcing this year’s “Kaisermania.” After the concert series could not take place for the past few years due to the corona pandemic, the hit legend finally returns to the banks of the Elbe in Dresden. The opening concert will take place on July 29, other shows will follow on July 30 and 31, as well as August 4, 5 and 6.

Not only are his fans excited about the news, as seen in the comments column, but the “Santa Maria” singer is thrilled as well. “My band and I look forward to spending fantastic and certainly emotional evenings with you! [sic]”, he writes.

Thomas Anders shares a rare vacation moment with his son

Singer and former “Modern Talking” member Thomas Anders, 59, is currently taking a short break from the Schlager stage. With his second wife Claudia Hess, 50, to whom he has been married for 22 years, the music producer is enjoying the sunshine on the popular Balearic island of Ibiza. His now grown son, Alexander Mick Weidung, 20, is also part of the party and completes the family break. Anders is also allowing his nearly 150,000 Instagram followers to take part in this – with a rare father-son snap.

In the very trendy El Chiringuito Beach House, Thomas and his son have fun in matching shorts in pastel colors. What is striking: Alexandre now dominates his famous father by half a head. As similar as the father-son team may seem, the 20-year-old is taking a different career path. Anders recently revealed to the “Schlager.de” portal that Alexander would aim for a career in the real estate sector.

For several weeks, 38-year-old Alexander Klaws has been playing the role of Winnetou in the play “Der Ölprinz”, which is performed at the Karl May Games in Bad Segeberg. But there were violent storms, which the first DSDS winner documented for his fans. He posts a series of photos showing that the whole set has been submerged.

“As you can see in one of the photos below, you could never have imagined that exactly on this scene (see photo) 1 hour later ‘Prince of Oil’ could take place. Completely impossible. ..! [sic] “, writes the singer. But the “weather god” counted without the technical team behind the scenes, the volunteer firefighters and the security service. Because they managed to eliminate the chaos in no time. ” You guys are awesome and we’re all just incredibly grateful that we had and HAVE you! THANK YOU on behalf of everyone involved, your Winnetou [sic]“, points out Klaws.

Elton is considered one of Germany’s most popular and experienced moderators, but in the show “Blamieren oder Kassieren XL”, which aired on “ProSieben” on July 27, 2022, the TV face committed the one or the other error. Once, the 51-year-old was even scolded by a guest.

“Her zodiac sign is ‘Party Palm’, and she even has that as a tattoo,” Elton Vanessa Mai, 30, announced on the show. But he immediately had a “What?!” irritated. Visibly amused, Mai repeated the term “party palm” before shooting the musician and asking, “What’s going on with you?” Why “party palm”? »

“Don’t you have a palm tree tattoo somewhere?” Elton replied, irritated. The musician was able to affirm it – the tattoo recalls her wedding in Mallorca – but she still found the introduction with this detail inappropriate. And it went even further: when Elton announced “Your album is called ‘Mai Tai'”, the 30-year-old exclaimed “That was last year!” and “Metamorphosis” between the two – the title of his new disc, which will be released on August 12, 2022. “Dude, Elton”, was then visibly annoyed Vanessa Mai.

Hélène Fischer, 37, is back. With Florian Silbereisen, 40, “Schlagercomeback”, the Schlagerqueen celebrated his return to television on July 23. And the interpreter of “Herzbeben” suddenly becomes also active on Instagram. In particular, their personal involvement in their latest post might surprise some fans. His last social media posts were always tagged “Team Helene”, which ultimately did not go down well with fans.

Now, Helene Fischer has finally reached out to her community personally. Among other things, she writes about a video: “It was so good for you to be on stage! Thank you for this weekend rush of happiness! The August show is fast approaching and my anticipation to see you all grows and grows. It’s going to be huge!!!” She decorates her contribution with a kissing mouth and: her name. After the baby break, the hit star seems to be celebrating her comeback not only on television, but also on the platform popular social media.

“The big hit comeback.2022”: The show ended so happily

“The big hit comeback.2022” has some surprises in store on Saturday July 23, 2022. For example, 37-year-old Helene Fischer celebrated her return to the stage after the birth of her first child. Especially for moderator Florian Silbereisen, 40, the ARD broadcast ended with a big, wet surprise.

The hit stars and the artist celebrated the show’s grand finale in Leipzig to Helene Fischer’s hit “Atemlos”. Beatrice Egli, 34, is now showing what viewers could no longer see on her TikTok channel. “When the cameras went out, we still took a total risk. Was Florian happy with the little refreshment?”, She writes in a clip that she shares on the video platform. It shows singer Maite Kelly, 42, and American star Anastacia, 53, as they push Florian Silbereisen into one of the fountains at the edge of the stage with concentrated female power – successfully. Will the host soon take revenge on his colleagues for this cheeky prank?

Maite Kelly: Fans Are Excited About Her Fire Red Look

Maite Kelly, 42, was probably able to sleep well on Sunday evening July 25, 2022. After all, she not only successfully staged her appearance at the “Das Große Schlagercomeback.2022” in Leipzig on Saturday, but was also showered with compliments by his fans on Instagram. There, the singer shared a short clip showing her having fun in her stage outfit – a bright red tube dress.

For her new look, the 42-year-old has caused storms of enthusiasm with around 226,000 subscribers. “Wow!!! Maite you look amazing [sic]“praises a fan. Another nods: “You really look great Maite! [sic]”And her performance, in which she initially wore an XXL skirt over her dress, which she jokingly calls her ‘parachute’, was apparently well received. “You are fantastic and a fairy tale appearance, dear Maite [sic]”Only one user out of many is enthusiastic. And something else stands out. ‘Maite, you’ve lost weight,’ notes one follower appreciatively.

After his performance, Oliver Petszokat looked relaxed in front of the camera while taking a selfie. Meanwhile, his wife Pauline watches him in love. The former GZSZ star has already performed on the Silbereisen stage – certainly a special moment for the musician, since his Pauline was able to cheer him on in the audience after so long. On Instagram, the interpreter of “Planes in the belly” thanks him with the following words: “We really had such a great day at @floriansilbereisen.official…! It was exciting, friendly and simply brilliant! Thanks for your love !”

Previous articleThe civil protection warns of temperatures of up to 40 °C and calls for maximum precautionary measures to avoid forest fires
Next articleDFB-Pokal live for free: This is how you see 1860 Munich vs Borussia Dortmund