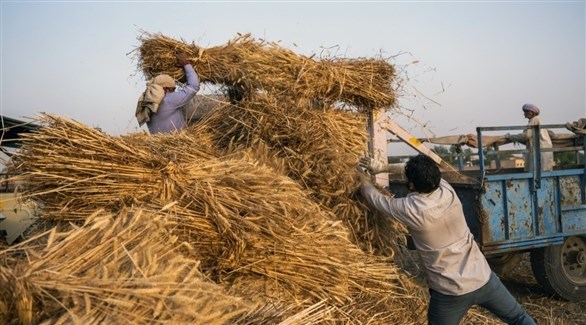 As global concerns over food shortages and consumer price inflation mount, India’s wheat warehouses are filling up and a record crop is expected for the current farming season.

The Bloomberg agency indicated that India is the second largest producer of wheat in the world after China, and may export up to 12 million tons of wheat during the 2023-2022 season, according to average estimates of traders, millers and analysts.

India’s exports in the 2022-2021 season amounted to about 8.5 million tons, according to data from the US Department of Agriculture.

This comes as record wheat prices on the Chicago Crop Exchange rose to the highest level on record at $13,635 per bushel this month, following the Russian invasion of Ukraine and the disruption of wheat supplies from Russia and Ukraine, two of the largest wheat producers. world exporters.

The average price of wheat on the stock market in the five years prior to the invasion was around $5.5 per bushel.
Lack of supplies on the world market and high prices in major wheat exporting countries increased Indian wheat’s competitiveness on the market for the first time in years, and with its wheat stocks swollen after 5 bumper crop seasons, India it has a large surplus of exportable wheat.
India’s Commerce Ministry said earlier this month that it had reached the final stage of talks with Egypt, the world’s largest wheat importer, to export Indian wheat to it, while New Delhi sought to export wheat to China and Turkey. after the world crisis. turbulence in the wheat market.

And the Bloomberg agency cited a statement from the Commerce Ministry that India is also considering exporting wheat to Bosnia, Nigeria, Sudan and Iran.