Richard Kagan: “My job isn’t to defend or criticize the Black Legend, it’s to understand it” 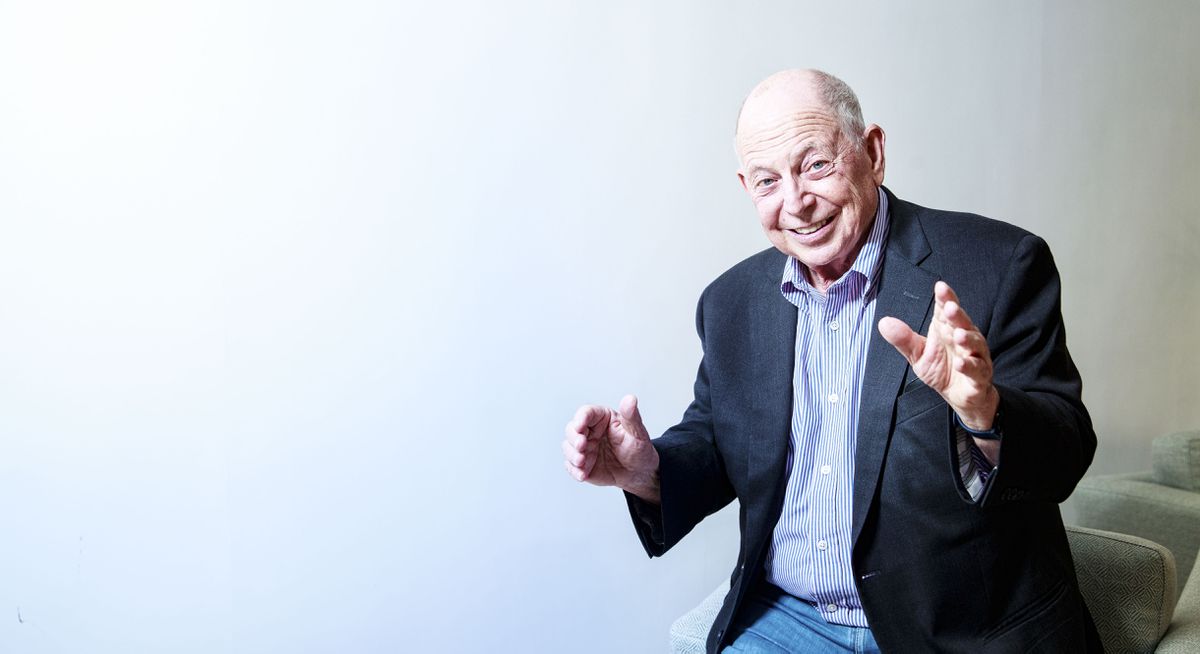 Richard L. Kagan (Newark, USA, 78 years old) likes Spain and wants to understand it. The historian, professor emeritus at Johns Hopkins University, has dedicated a good part of his career to this. Because of this, he was recently made a doctor matter of honour (along with writer Paul Auster) from the Autonomous University of Madrid. He is a member of the Madrid Institute for Advanced Study and Commander of the Order of Isabel la Católica. His latest book is The magic of Spain (Marcial Pons), about the magic that the country’s greatest images cast on Americans and how they are an integral part of their roots. In the case of Kagan, it’s more than obvious. And of course he likes to speak Spanish. Also about the gazpacho.

Questions. The Black Legend, what a mess.

Answer. I don’t think there is a need to go into this debate too much. My job is to understand the past, not defend it or criticize it. Many countries have done things that seem terrible by today’s standards. Spain is not devoid of this legacy as it is the first country to enter America. Slavery was traditional, the idea of ​​Christianizing the native people was not strange. They carried these values ​​into the New World. Just as the British crushed the natives of North America soon after, or the Dutch did in the Caribbean or in Indonesia. The problem is that the Spaniards were the first.

P How was this legend established?

R Bartolomé de las Casas sharply criticized the treatment of the natives. As his work was translated into other languages, the image of the brutal Spaniard in the eyes of foreigners became firmly established. Then came the Inquisition. Criticizing Spain became a value. When the Enlightenment came, Spain was thought to be the Inquisition and the atrocities described by De las Casas.

P And was that?

R To a certain extent yes. But there were also some images that served as a balance: the Black Legend idea competed with others. For example, the romantic Spain popularized by Washington Irving Tales from the Alhambra. Or the brave Spain of the conquistadors, which was a model of courage and manliness for many Americans in the 19th century. It’s the subject of my last book The magic of Spain.

P You talk about balance, but the balance seems to fall to one side.

R For several years, too much emphasis has been placed on the Black Legend and the other images that existed in parallel have been forgotten. I have criticized books like empire phobia (Siruela), by María Elvira Roca Barea, hometown (Espasa), by Marcelo Gullo, or recent defend Spain (Espasa), by Henry Kamen. I don’t want to defend Spain, but to understand: it’s more difficult.

P He speaks of the “ban of Spain” as an epidemic. It’s a strange simile.

R yes like the covid of the time There were those who called love for Spain a fever (spanish fever) that was caught, from which it was difficult to protect oneself. I thought that was a great idea, although it can also be confused with the 1918 “Spanish flu,” which was different.

R And this “fever” was based on the mythological conceptions of Spain that you refer to.

P Yes, I chose the word enchantment because there is something of an enchantment in it, an enchantment that, inspired by Irving, made many 19th-century travelers fail to see the Spanish reality: they only saw gypsies, beggars, donkeys and other things that seemed picturesque to you. It was as if they wore special glasses that only highlighted certain aspects of the culture, the most romantic, sunniest, and joyful. And also traditional values ​​like loyalty, self-confidence or history, which were missing in the USA, a more urban world.

P Why did you become a Hispanist?

R I don’t like the term Hispanist because it primarily refers to scholars of literature rather than history. I’m a historian first and I’m interested in Spain, in its empire, in relations between Spain and the United States. I’m trying to be a specialist in Spanish history. But I understand that the word Hispanist is used in colloquial language: from the s. XIX was used for scholars with an interest in Cervantes, Lope de Vega or Calderón. It’s a term that’s almost impossible to eliminate.

P Then why is Spain an interesting country for a historian?

R It has a long history, much longer than my country’s. A complicated story with very bright moments and others less. One of the most interesting and debated aspects is the mixture of races and religions, coexistence and conflict. Moments of world relevance, like the 16th and 17th centuries. And times of regression (I don’t like the word Tilt) like the attempts to adapt the country to modernization in the 19th century, a difficult time. Other difficult times happen in the s. XX, like Francoism. And then a lesson on how to build a functioning democracy…at least for now. There is everything.

P What’s the difference when a historian writes about a country that isn’t his own?

R There is an opportunity to see cultural or economic history through different lenses, with different approaches than those found in the country itself. We bring in questions that have been studied in other cultures or other countries, but which are often not part of the vocabulary of national historians. We carry other, new voices that can cause surprises.

R For example when I get to work the prophetic dreams that Lucrecia de León had on the future of Spain at the court of Felipe II. Nothing was written on the subject. Some colleagues asked me why I wasted my time on things that didn’t seem important.

P How did your personal interest in Spain come about?

R My father, a small business owner, took a trip to Latin America, I believe it was 1956. He thought I would follow in his footsteps as a businessman and he recommended that I stop studying French like my brother and learn Spanish that it would be more helpful to me. When I entered college, I was the only one in my class studying Spanish. I wrote something about the Earl Duke of Olivares, and my professor sent my letter to Professor John Elliot without telling me anything. John liked it a lot and said to me, “Why don’t you come to Cambridge with me?” I found going to England much more interesting than staying in New Jersey. So I flew away! And since then I’ve been working on Spain. I’m not bored yet.

P Is it necessary to apologize for the abuses of the conquerors?

R No, you have to understand them, there is no point in asking forgiveness for s sins. XVI Among the inhabitants of Mexico, this abuse also took place before the arrival of the Spaniards, civil wars that the newcomers took advantage of, as they did in Peru. According to this idea, the Mexicans would also have to apologize for the tensions between the indigenous peoples at the time. Everyone engaged in human brutality, we find it hard to understand that slavery was a normal thing.

P In other words, it has to be acknowledged that there were abuses that were common at the time, but there’s no point in apologizing.

R Yes, we can understand what happened and we can criticize it from today’s liberal values. But sorry…

R Yes, in a way yes. At least they encouraged it: they set routes that other sailors followed. They promoted “planetary consciousness,” the idea that the planet is unique. The industry of manufacturing globes began, which was very successful: suddenly we were part of one world and had ways of connecting it. This anticipated later economic globalization. Globalization began in the mind before trade.

P There are those who still lay nostalgic claims to the Spanish empire, particularly in right-wing and far-right sectors. Makes sense?

R Everyone has their madness, as the old Spanish saying goes. Why not? There are Americans who still nostalgically think of the greatness of the 1950s as a glorious moment of waning world power.

R Yes that’s right. In the Spanish case, empire is being exaggerated. What did the Empire mean to the Castilians, Catalans or Valencians of the time? price inflation. New products such as potatoes or tomatoes where the gazpacho turned red, which used to be more like Cordovan Ajoblanco (I gave lectures on the subject). The empire for the common people didn’t change much. Or it meant dying in Flanders or southern Italy, fighting for something. You have to understand that every day, that’s important to me.

P In Spain there is a lot of debate about Spanish identity, what Spain is and isn’t. Is it such a problematic issue in other countries?

R Spain is a multilingual country and the culture varies in different regions. We must respect these differences and identities that existed before Spain was founded. It is practically impossible to eradicate these legacies. But Spain is not an isolated case.

R Many languages ​​were spoken in France until the 19th century, but the French began to eradicate Breton, Provençal, in that century to achieve a French nation. The 19th century Spaniards did not have this kind of politics, which arrived here very late with Franco. Hence the strong reaction in the mid-20th century, because despite Franco, identities lived on in minds and cultures. The Breton and Provencal had attempts to be revived but without as much success as in Spain.

P And in the United States?

R In the United States, the language problem isn’t as severe, but it’s starting: it’s becoming a bilingual country with Spanish and English speakers, which creates tension, especially in places like Texas or California.

P Europe was the cradle of global empires, but now it plays less and less of a role in international politics. How can this affect our identity, our self-esteem?

R We historians don’t like to talk about the future: our chip only works backwards. Although I think Europe will continue to be relevant. Now, with the war in Ukraine, we see how the European Union can become not only a political but also a military union. Europe will have a say in politics and the economy for a long time to come.