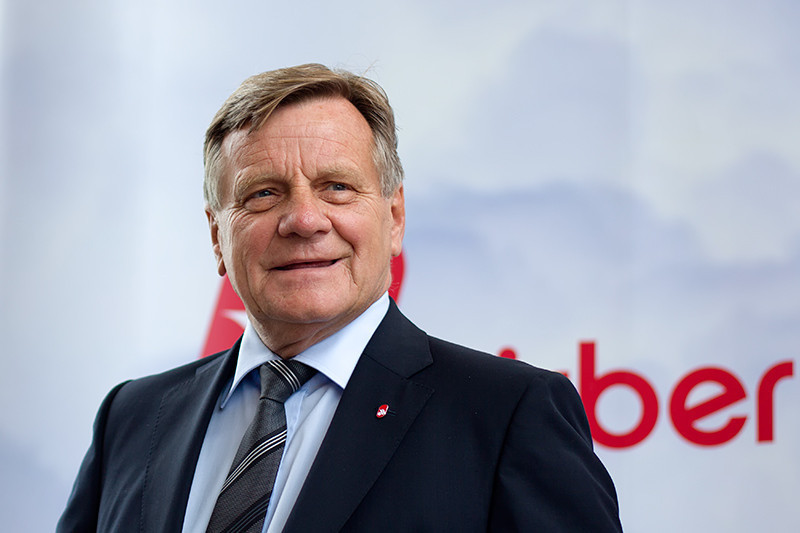 BERLIN – For a long time, Bahnchef was like a first name for him: Bahnchef Mehdorn. Some say passengers are paying the price for his strategy in the 2000s. It goes without saying that Mehdorn has an opinion on this.

His name is again mentioned more frequently, despite having long since retired. When we talk about delays, canceled trains, in short: the problems of Deutsche Bahn, we often hear the name of Hartmut Mehdorn. From 1999 to 2009, at the head of the railways, he put the public company on the road to profit – and as some say: badly spared. An accusation that someone like Mehdorn has not dropped to this day: “It is an allegation and it is simply false and unfounded,” said the head of the German press agency. This week, he turns 80 (July 31).

He will celebrate his birthday in the south of France, says Mehdorn. He owns a house and a small vineyard there with his French wife. Children and grandchildren would have announced their visit. The former manager looks relaxed. Berlin is far away. But what was happening on the railways occupied him even in retirement. Responsible for the current misery from his point of view: the federal government. “The state neglected its rail infrastructure for many years,” he says.

Whether on the board of directors, at the head of Air Berlin or on the chaotic construction site of BER airport: wherever he went, Mehdorn, one of Germany’s best-known managers, polarized. Catchy for some, messy for others. An admirer of Napoleon between self-confidence and self-expression. With strong words and the courage to make uncomfortable decisions. Title of his biography: “I never wanted to be a diplomat.”

The Berliner headed Deutsche Bahn for ten years. During this time it has grown into an international transport group, the freight forwarder Schenker has been added, a third of DB’s 324,000 employees now work abroad. During the Mehdorn years, an annual operating loss of €1.5 billion turned into a profit of €2.5 billion.

Its politically predetermined goal was the IPO. But the financial market crisis intervened in 2009. Mehdorn remains a supporter of the partial privatization of the group. The ten most successful railways in the world have one thing in common, he says: “They are listed, customer-oriented, profitable, punctual and clean without government influence.”

However, to cut costs, the railroad under Mehdorn withdrew from the area. Roads, switches and passing lanes were closed. Today, passengers feel the countless backlogs the railway is racking up in the face of a huge renovation backlog. The network has been neglected for years, says Federal Transport Minister Volker Wissing (FDP).

The former group leader also sees it that way. But the federal government was responsible for that. In ten years at the head of Deutsche Bahn, the group’s investments have doubled compared to the previous twenty years. The government, in turn, almost halved its investments between 2001 and 2008. “The only country in Europe that has not invested enough in its railway infrastructure is Germany. Not railway management” , says Mehdorn.

The fact that Wissing now declared railroad issues a top priority would not have happened to him. “There are also clear rules for public companies, the role of shareholders, the role of the supervisory board and the role of management.” A minister does not appear there. “I wouldn’t have accepted that.”

Mehdorn eventually stumbles upon a devastating case involving mass audits of employee data. Even at retirement age, he breathed fresh air into the airline Air Berlin from 2011 to 2013 – before the airline later went bankrupt. From 2013 to 2015, he fought against a lot of resistance on the BER construction site, spared neither himself nor others and secured a new opening date – which could not be kept.

The career of the restless spirit Mehdorn has therefore been described as unfinished. It all started in the former Federal Republic. Back then, managers were still allowed to be patriarchs and air travel was an elusive dream for many when the mechanical engineer started working for United Aviation Works in Bremen in 1964. Mehdorn went to Airbus, which rose to the board of directors of what was then Deutsche Aerospace, was transferred to the head of Heidelberger Druckmaschinen, before Chancellor Gerhard Schröder appointed him to head Deutsche Bahn.

Mehdorn enjoys the attention in this position. Wherever he goes, he stirs up dust, provoking when it serves his purposes. When a new fare system sparked a week-long wave of criticism, Mehdorn hushed it up and said, “We got it, ashes on our heads.”

Mehdorn rarely avoids conflict, but fights with an open mind, as the reviews also confirm. “If anyone gets in my way, I say, ‘You’re a fool,'” he once said. He enjoys being an old-school manager and pokes fun at the younger ones: “Today managers can walk under the rug without making a dent.”

Total commitment has a price. For years, Mehdorn hardly took vacations. “During the summer holidays, I took the family to the sea, then I continued to work,” the father of three once revealed. He no longer exercises any mandate or supervisory board mandate, he said today. His family, who came for his birthday, should be happy.