Retina ECO Awards 2022: the commitment of companies to innovation to respect the environment 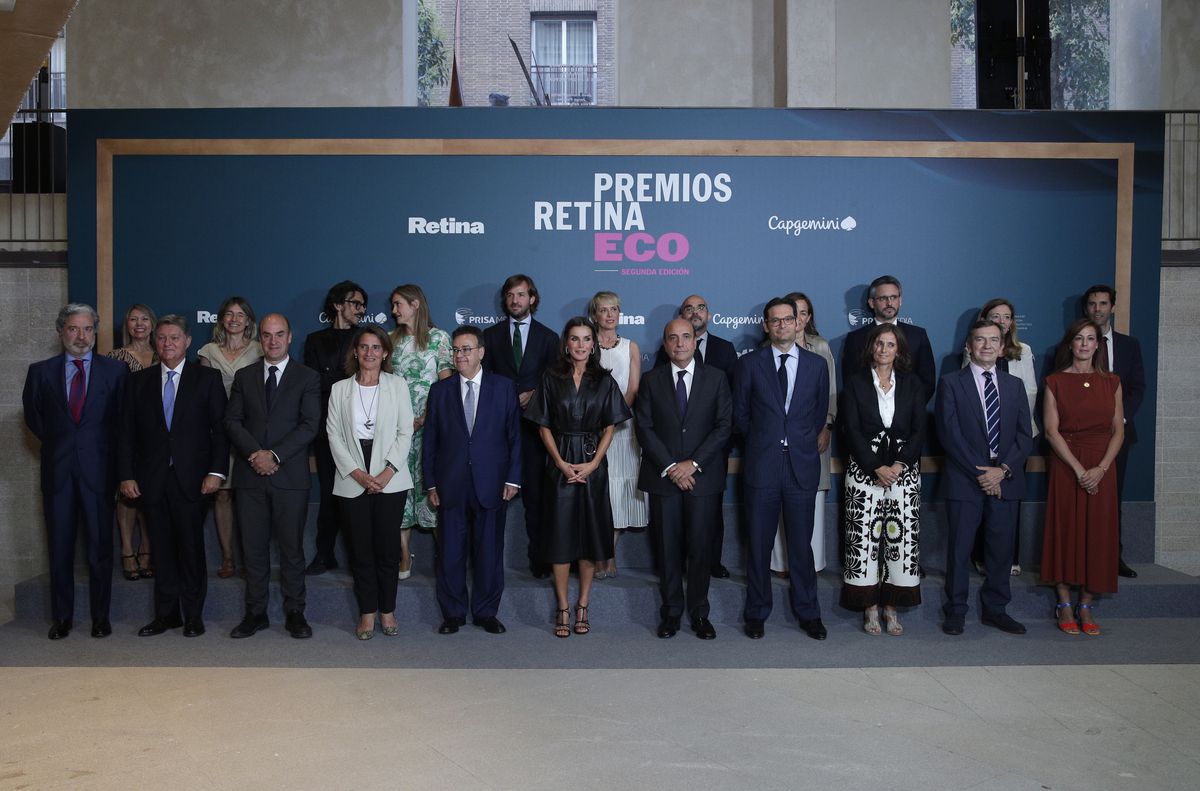 Sustainability, innovation and energy saving to fight climate change. These are the premises that unite the five winners of the Retina ECO Awards 2022. The second edition of the awards, organized by Retina and Capgemini, yesterday recognized the best projects of 2021 from companies committed to the planet. During the ceremony, presided over by Queen Letizia, Acciona Energía, Enagás, IDAE and Cemex recognized the Green & Digital Hydrogen Mallorca plant, which won the prize in the Green Generation category. The Mahou San Miguel and Verallia energy efficiency project has won the Consumption Efficiency Award. Endesa’s solar bee station, a pioneering beekeeping initiative, did this in a sustainable ecosystem. ITP Aero’s medium-pressure turbine for a 100% sustainable fuel engine won in the Smart Mobility category, while Repetco’s multi-layer PET plastic recycling plant won in the SME category.

“Sustainability is not a slogan, it’s a goal,” said Retina Director Jaime García Cantero. The presenter of the awards ceremony, who spoke to the representatives of the winning projects, emphasized the relevance of their actions to the planet. García spoke of the importance of triple sustainability: planetary, social and personal: “Our commitment to these awards is environmental and planetary, but without losing sight of the other two, because the ecological transition that we are experiencing must be fair, diverse and be inclusive, leave no one behind”. To illustrate this, he provided two numbers: 50,000 million and zero. With the first he referred to the annual emissions of CO₂; with the second what man should spend to save the planet.

The event was also attended by Teresa Ribera, Third Vice-President of the Government and Minister for Ecological Transition and the Demographic Challenge, who closed the event with a tribute to companies’ innovative and pioneering work. “To solve problems, you have to think differently,” he said. “This is probably the most exciting and turbulent decade in memory,” he said, considering the current historical context. For this reason, he spoke of the important role of the selected projects, of which he highlighted the collaboration between different companies, from the efforts of SMEs to large companies where technology has a lot to contribute. “The combination of intelligent use of resources and the use of existing technologies, but without forgetting the context in which these technologies are useful, is essential,” said the minister.

The fight against climate change is everyone’s task; a commitment that particularly affects the corporate sector and that Capgemini CEO Luis Abad also wanted to acknowledge: “We must accelerate our plans, initiatives and investments. Today we are here to recognize the companies that are going from idea to fact and investing in these sustainability plans.”

The ceremony, enlivened with musical performances by La Bien Querida, Klik & Frik and Tiraya, took place at the Official College of Architects of Madrid. The meeting was attended by 200 guests, including relevant representatives from business, technology and sustainability. In addition to the presence of the Queen and the participation of Vice President Teresa Ribera, Secretary of State for Energy Sara Aagesen; the Secretary of State for Digitization and Artificial Intelligence, Carme Artigas; the CEO of Capgemini Spain, Luis Abad; the President and Vice-President of PRISA, Joseph Oughourlian and Rosauro Varo; and PRISA Media Executive President Carlos Núñez.

The award in the Green Generation category was received by the representatives of Green & Digital Hydrogen Mallorca. Led by Acciona Energía and Enagás and with the participation of IDAE and Cemex, the initiative represents the first green hydrogen ecosystem in southern Europe and includes the construction of an electrolysis plant, two photovoltaic panels that feed it and a green hydrogen fueling station. and thus promotes the development of a regional economy based on this energy source.

In the Efficient Consumption category, the winning project was the energy efficiency work of Mahou San Miguel and Verallia. The initiative uses the residual heat from glass production at the Verallia plant in Burgos and uses it to generate steam in the brewery. The project has resulted in a 68% reduction in CO2 emissions and gas consumption at Mahou San Miguel’s manufacturing facility in 2021 into the atmosphere.

Endesa’s solar apiary was awarded in the Sustainable Ecosystem category. The project is a pioneer in Spain in the field of beekeeping. Developed in Carmona (Seville), it is the first commercial initiative for the production of honey in a photovoltaic system hybridized with a 3-hectare aromatic plant. The initiative has an innovation space in which tarnishing Implementing technology that helps beekeepers run their operations more efficiently.

Smart Mobility award-winning component manufacturer ITP Aero has developed the first medium-pressure turbine for a Rolls-Royce UltraFran demonstrator engine that is ready to run on 100% sustainable fuel. The initiative, developed mainly between Zamudio (Bizkaia) and Ajalvir (Madrid), is implemented in the Rolls-Royce engine in Derby (England) and reduces fuel consumption by up to 25%.

The company Repetco, SME award for innovation and sustainability, received the award for building the world’s first industrial-scale plant for recycling multi-layer PET plastic, one of the most difficult materials to recycle. The new recycling system for this type of plastic, which is very present in the food sector, avoids the use of chemicals, reduces emissions and promotes the circular economy through the recovery of raw materials.

Winners, selected from more than 100 projects, were evaluated for their innovation, impact on sustainability and fight against climate change, technology and other environmental or social aspects related to the United Nations Sustainable Development Goals. The expert jury, which met on May 31 for advice, was made up of relevant personalities from science, teaching and business.

The winners were selected by a jury made up of Secretary of State for Energy Sara Aagesen; the managing director of Capgemini Spain, Luis Abad; the Secretary of State for Digitization and AI, Carme Artigas; the Director of Industry, Energy, Environment and Climate, CEOE, Cristina Rivero; the General Director for Information and Innovation Systems of Ferrovial-CIIO, Dimitris Bountolos; the Director of Corporate Affairs and Sustainability, Telefónica SA, Eduardo Navarro; Retina director Jaime García Cantero; Lara de Mesa, Global Director of Responsible Banking at Banco Santander; the Director of the Associate Chair in Social Transformation of the UCM; Begona Gomez; the Founder and President of the Open Value Foundation and Global Social Impact Investments, María Ángeles León; and the CEO of Capgemini Invent Spain, Laurent Perea.