Results of an election campaign in Andalusia burned and pulseless 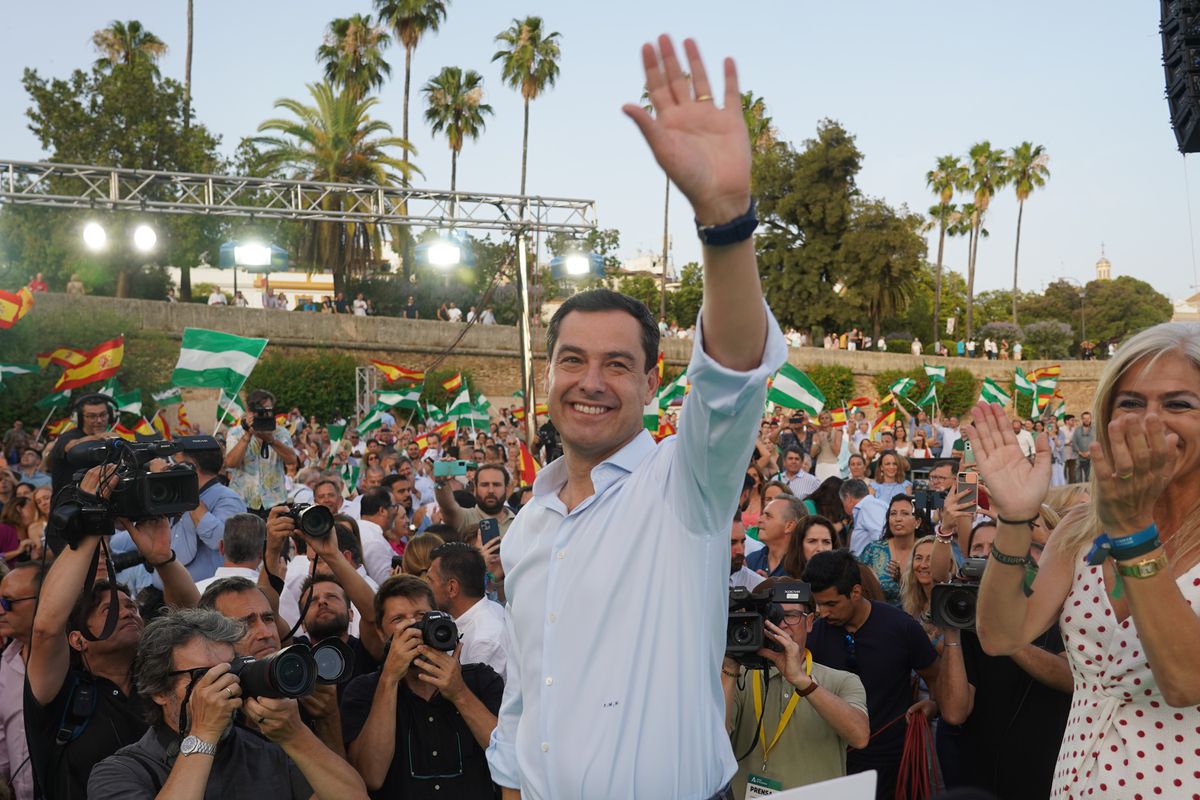 The worst heatwave in June in decades literally seared an election campaign that was born without a pulse due to the special interest of the PP. The population chose June 19 as the date for early elections, in which the main concern was not to mobilize the left. But not even the PP expected such extreme weather. The candidates ended up fused in an unobtrusive and sometimes almost secretive campaign with very little electoral tension. To the point that there is now a risk that Andalusians will prefer a Sunday on the beach to voting massively.

The campaign ends as a metaphor for what could come out of 19-J: PP and Vox hold their closing rallies in Seville just a few meters apart, separated only by the Triana Bridge.

From rally to 40 degrees. Hundreds of baby swifts, a protected species, have turned up dead on the streets of Seville in recent weeks. The parties had to postpone the timing of their rallies as much as possible, almost at night. Uncertain is how this will affect attendance as Seville and Granada celebrate Corpus Christi, the tomcat of El Rocío and the Andalusians shake off the dog days along nearly a thousand kilometers of coastline. It is the opposite situation to the elections in Castilla y León last February, which were marked by great cold and where turnout fell to 63.3%, 2.5 points less than in 2019.

Moreno Bonilla, candidate of the Juamma party. The President of Andalusia and PP candidate sees himself as Emmanuel Macron or as Adolfo Suárez, in other words as a personal brand above that of his party. During the election campaign, he took this strategy to the extreme, jibarizing the PP’s acronym and filling the rallies with Andalusian flags, over those of Spain and those of the party. Moreno Bonilla transformed the Andalusian PP into the “Juanma” party, a seemingly de-ideologized project that aims to attract voters from all over the world, including the centre-left party. The PP’s almost chameleon-like transformation has gone so far that the party ended up having to broadcast explanatory videos so that Andalusians know that to vote for Juanma they must take the PP ballot.

The órdago de Vox and this pact I haven’t heard of. Moreno Bonilla has spent the entire campaign trying to break a potential pact with Vox, as if the far right hadn’t been decisive at his inauguration in 2018, nor had he backed the three regional budgets and all major legislation. “I don’t see myself with Olona as vice president,” he explained in an interview in EL PAÍS, in which he did not want to commit to not governing with Vox. But the extreme right had a different plan aimed at blasting that strategy, and its candidate Macarena Olona launched the Ordago in the second election debate: If you need a single vox vote or a single abstention, he warned, you must do put them in government. After the intense pressure, on the penultimate day of the campaign, Moreno Bonilla’s subconscious betrayed him and he slipped: “In case it was necessary for him to step in [en el Gobierno] Vox…” he confirmed. Meanwhile, the leader of the PP, Alberto Núñez Feijóo, has asked the PSOE to abstain from voting.

A multiplied sword against the elements. For the first time, a PSOE candidate went to the polls without the comfort and security of being a board president. The most powerful federation of Spanish socialism had to learn to resist through forced marches while targeting the 400,000 abstentions in 2018 that voted for Pedro Sánchez months later. An impossible task with Susana Díaz – banished to the Senate – and her advisers to the last socialist government in the Andalusian Parliament. Former Seville mayor Juan Espadas has maintained a race against time and apathy among his constituents to make up for the lost three years of the legislature, during which the PSOE failed, while Moreno Bonilla built his profile as a moderate and transversal statesman.

The unknown Macarenazo. Vox had fueled great expectations with the landing of one of its first swords in Andalusia, National MP Macarena Olona, ​​known for having the sharpest tongue in Congress. But the landing of the Ultra candidate from Alicante, who lives in Madrid, was soon complicated by legal doubts/espana/elecciones-andalucia/2022-06-02/macarena-olona-dio-a-la-guardia-civil-de- salobrena-un-domicilio-de-madrid.html at the home of a Vox leader. In the end, the judiciary allowed Olona to stand for election, but his Cunera candidacy has acted as a handicap and, surprisingly, he made headlines in the first week for his oddly low profile. Vox entered an autonomous parliament for the first time in 2018 and made the national leap from there. Now he’s back on the grid and facing a potential setback for the first time.

And Yolanda Díaz got wet. The Second Vice President and Minister of Labor fought for just one day in Castilla y León and without the Podemos leaders in the town of Castronuño (Valladolid) of 800 residents. But Andalusia is something else. Diaz’s decision to start resecting all that space in the Andalusians is a statement of intent. For lack of words to deeds and to specify the Sumar platform, the brand in which the left wants to unite the left of the PSOE, the three rallies that Díaz attended were by far the most massive of Por Andalucía , with more than 3,000 people in Dos Hermanas (Seville), a stronghold of the PSOE, where the vice president winked at socialist voters.

The disunited left does not answer any accusations. The weakness faced by the left in Spain’s last three elections has forced one persons nothing ordinary. The survival instinct has prevailed over the usual bickering and bickering between the various progressive sensibilities. The PSOE has also ignored its left, apart from the typical proclamations asking for a useful vote. The truce does not guarantee that Por Andalucía and Adelante Andalucía will achieve the 17 seats that the 2018 space brought together.

Marín trusts Torrijas. Ciudadanos’ candidate Juan Marín, vice-president of the executive board for four years with a powerful group of 21 MPs, is now fighting for his party’s survival. With a unique strategy: to justify the government’s action, which he shared with the PP to the point that he seemed to be Moreno Bonilla’s best defender. Marín’s crowning moment came in the second debate when the Vox candidate accused him of spending the pandemic cooking French toast. Marin took advantage of that French toast moment meal some in honor of Olona in the hope that they will give him a place.