Refugees welcome because they are “Europeans” .. Ukraine war racism 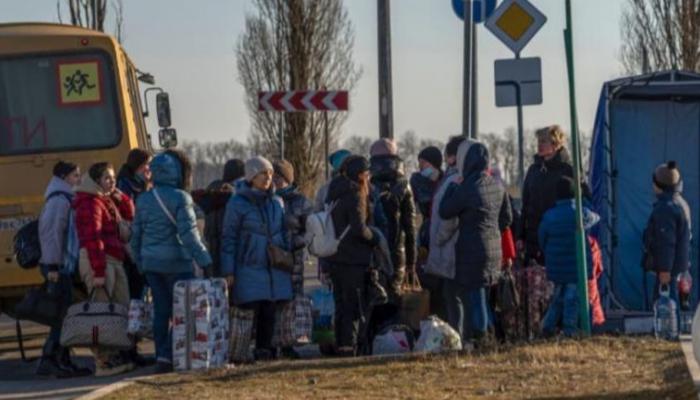 The West showed unprecedented coordination and unity in its response to the Russian war against Ukraine, according to CNN.

Governments, businesses, and individuals banded together to impose sanctions and boycotts on Moscow, and Europe opened its doors to the influx of refugees.

But amid this outpouring of sympathy, stark — or rather “racist” — contrasts emerged in the way Europe handled Ukrainian refugees versus those from conflicts in the Global South, according to CNN.

The US network described the Ukrainian refugee crisis as “painful”, noting that, according to the United Nations refugee mandate, more than three million have fled the country since the beginning of the Russian war.

To put this in context, it took a million refugees six months to leave Syria in 2013, almost two years after the start of the country’s civil war.

The two wars took place at different times and on different continents, but unlike the Syrians struggling to flee, Ukrainians are receiving a warmer welcome in Europe.

HA Helier, a scholar at the Washington-based Carnegie Endowment for International Peace, said: “It is extraordinary to see the relative ease with which they are received by almost all European governments, and how their plight against Russian aggression produces an overwhelming solidarity “.

There is a “shockingly different set of people’s priorities,” Martin Griffiths, the UN’s humanitarian and emergency aid coordinator, told CNN this week, but added that it was not uncommon for neighboring countries to absorb large numbers of refugees. citing Syrians in the Turkey region and Afghans in Pakistan as examples.

Denmark is known to have some of the strictest anti-immigration policies in Europe, but the government has taken in Ukrainian refugees.

While he says that all refugees are treated the same, he urges some Syrian refugees living there to return home, despite the ongoing conflict in their country.

In France, far-right French presidential candidate Eric Zemmour told French broadcaster BFM on March 8 that it would be acceptable to have different rules for refugees from Europe and those from Arab-Muslim countries.

He added: “Everyone knows that Arab or Muslim immigrants are very far from us and difficult to assimilate. Therefore, we are closer to the Christians of Europe.”

It is necessary to address the needs of the Ukrainians, considering that a third of the refugees who have arrived in France since the beginning of the war are not Ukrainians, said former French deputy Marion Marchal, who supports Sommer in the presidential campaign.

Marshall relied on an article published in the newspaper “Le Figaro” which states that among the more than 5,000 refugees from Ukraine who are in France, 30% are of other nationalities, especially Algerians.

He said that these migrants benefited from the opening of borders and corridors that were opened from Ukraine to the Schengen area.

When Bulgarian Prime Minister Boyko Borissov was asked, days after the start of the Russian war against Ukraine, about the possibility of receiving refugees, he said that no European country fears the next wave of migration.

“These are European, so we and all countries are prepared to receive them. I mean, this is not the wave of refugees that we’re used to, where we don’t know what to do, people with an unknown past, right? terrorists (or not)?

Hellyer suggested that the disparity in the treatment of refugees may be due to Ukraine’s proximity to host countries and the prevailing assessment in the West that Russia threatens Europe’s security through war.

“Sympathy and solidarity should reach everyone in need, not just people who look like us and pray the same way we do,” Judith Sunderland, associate director for Europe and Central Asia at Human Rights Watch, told CNN. .

“Europe is doing the right thing this time, keeping its borders open for all and moving quickly to grant temporary protection to Ukrainians, sending strong messages of sympathy and solidarity,” he added.

“But this is in stark contrast to the policies and practices we continue to see regarding refugees and migrants from other parts of the world, the majority of whom are brown and black.”

According to a United Nations report issued in 2021, of some 7 million Syrians who were forced to flee their country, about a million live in Europe, with Germany and Sweden hosting 70 percent of them.

- Advertisement -
Share
Facebook
Twitter
Pinterest
WhatsApp
Previous articleTexas student whose face was ripped off by two rescue dogs reveals injuries: ‘It’s time to show who I am now’
Next article🎓 Will the Chinese digital yuan take away the hegemony of the US dollar?