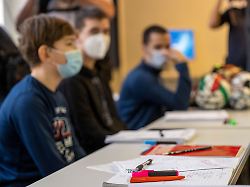 Hannover (dpa/lni) – The Lower Saxony state government is reacting by lowering the requirements for schools and kindergartens to allow the admission of Ukrainian children and young people. One more child per group will be allowed in nurseries until the end of July. Additionally, operating permits for new facilities or clusters, as well as deviations from spatial specifications, must be approved during this time without further review. In addition to regular classes, schools may also offer Ukrainian classes or welcome groups, as well as online Ukrainian language offerings. This was announced by the Ministry of Education in Hannover on Friday.

Minister Grant Hendrik Tonne said the measures were necessary to help families fleeing the war. He knows some of the decisions are likely to “put even more pressure on staff,” the SPD politician said. “The corona pandemic is still in the bones and taking in Ukrainian children will be another big challenge. We can see that. But such a crisis cannot be overcome with general conditions in normal mode.”

Schools have also reached the limit of their capacity. “In this unexpected emergency, schooling and teaching will not be possible as usual,” Tonne said. “Therefore, schools have plenty of legroom to cope with the situation and give Ukrainian children and youth structure and safety, education and social contacts.”

The minister emphasized that the state is doing everything possible to support kindergartens and schools with additional resources. Among other things, a reporting portal for Ukrainian education professionals was created. The state also wants to specifically recruit retirees and students.