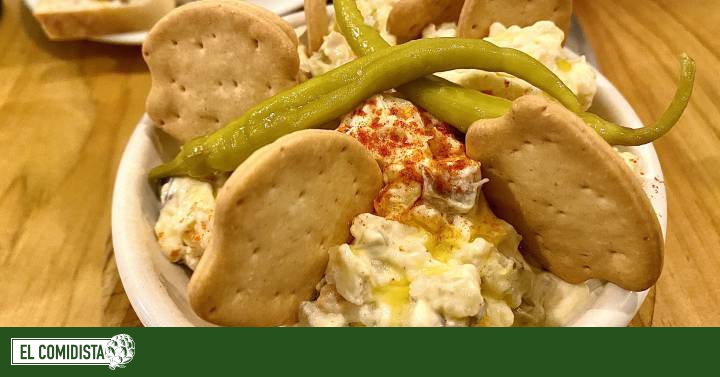 My family ran a restaurant in Collblanc, a border area between Barcelona and Hospitalet de Llobregat, for 84 years. The whole time the herd was running at full speed, you knew when the coffee pot was going to be turned on, but not when the last plate of tripe was added Cap i Pota. There was closed when the last customer decided.

We come from a tradition where bars are required to remain open from sunrise to sunset. Society has always taken a selfish look when a restaurateur decides to close beyond Monday or Tuesday. When we find a blind down one Sunday without a makeshift sign announcing that the bar is “CLOSED FOR PERSONAL MATTERS” it conveys a certain sense of neglect, unprofessionalism and even laziness on the part of the owners. How can you think of closing when I’m having a party and can enjoy a vermouth and some tapas?

We’d rather walk past a deserted bar with waiters sitting and reading the paper than a closed one; because bars are temples of worship to the hedonism that is part of our culture. Small shrines scattered throughout the city, where parishioners come at any time to drown their guilt without anyone judging them. They owe the people and their farming is limited to serving their residents food and drink whenever they want.

A pandemic that changed the rules of the game

Covid-19 has consolidated a paradigm shift that began to emerge during the 2008 economic crisis. We live in a social context where everything is immediate and nothing is permanent. The present, the here and now, is all that matters. Emotional and spiritual well-being is valued higher than economic and material well-being. A college degree does not equate to professional success and we are obsessed with finding our true passion to develop before the aliens arrive, World War III breaks out or there is a global blackout.

Faced with this societal change, some great starred chefs, such as the Roca brothers or Dabiz Muñoz, raise the flag, committed to the “humanization and sustainability of the hospitality workforce”. This trend aims to break with the medieval stigma so ingrained in our culture that forces bars and restaurants to be open 24/7. Although the citizen is more interested in the opinion of the taverns we regularly visit, it is surprising that it is the culinary elite, the same ones that have more than half of the employees on internship contracts who work fourteen hours a day, that make these wants to lead trend.

This “humanization,” which has been talked about behind the scenes for more than 20 years, never stops because certain practices that are inhumane, to say the least, have been shockingly normalized. How to contract for fewer hours than worked and in the category of busboy, even if the worker keeps trays full of drinks for half his life, count the hours outside the contract in B, do not pay overtime, do not grant two consecutive days off, Work partial shifts or shifts of more than twelve hours.

The blow that the pandemic has dealt the restaurant industry with all its might, as well as the precarious conditions of a profession that is so important for this country, have led the waiters to seek a life in other sectors.

An inexperienced hotelier is like a car without a driver.

One of the main issues that has skewed recovery is the lack of training and experience of those who run this type of business. Just as we wouldn’t think of starting a graphic design studio if we couldn’t do a portrait with a six and a four, or open a hair salon because we only know how to use scissors those who cut pizza, why are people opening bars and restaurants? Many people think that after visiting bars and beach bars their whole life they are able to get behind a bar to steer the rudder. Mistake.

A waiter managed by a person who does not know the ins and outs of the profession, who does not smile and avoids eye contact, who returns to the bar without taking advantage of the trip to clean a dirty table and who has not done it the commercial skills to get his customers to continue drinking and eating even when they are not thirsty or hungry, it is impossible for him to learn the craft. Add to this the normalization of appalling working conditions and we are faced with an industry that has been rotting for decades, also at the hands of tyrannical and inexperienced restaurateurs.

The value of time is the most valuable currency

We are living a moment of transition. Bars and restaurants in the metropolitan areas are no longer gas stations where citizens fill up whenever they want, even though it is not profitable for them to open at certain times. The new establishments emerging on the city’s gastronomic scene are rebelling against the unwritten ancient law that says taverns are temples of worship for instant indulgence, sanctuaries that must be available to the one who is always right: the customer . The act of disobedience is manifested in promoting a restoration that is reconciled with the personal lives of its associates.

Their goal is very clear: to work for a living without being slaves to their customers. You take the reins and decide how and when. Some like that Bar Monterolas, bardeni either cure from Barcelona or Lakasa from Madrid, open from Monday to Friday to rest on Saturdays and Sundays. Anyone who thinks that this does not also work from a certain degree of restoration is wrong: The little room Begoña Rodrigo, with a Michelin star, does not ship on weekends either. others like Farm Vendrell either Elena farm, also from Barcelona, ​​lower the blinds in the afternoons and limit themselves to serving breakfast and lunch. There are also those who choose to only open the days and hours that have a higher turnover, such as Sunday Splendini bar and nightclubs from Valencia, which works from Wednesday to Saturday from seven in the evening to offer pastrami and salad bites with plenty Soul.

This new take on restoration with office-like working hours, in addition to reducing staff costs, also allows for the elimination of some of the tyrannical practices so entrenched, such as with split-shift. Something that only allows you a few hours of rest and in which it is impossible to switch off or attend to personal problems.

It’s not that the restaurateurs driving this change don’t want to work or don’t know the industry, as some bucking this trend think. Time is one of the most precious goods today. People in the hospitality industry want to work the same hours as the rest of mortals in order to be able to take a Japanese pottery class or do whatever they want in a few free hours that follow the rhythm of society.

So if gastronomy has traditionally been a sector that has swum against the tide to satisfy the citizens in their free time and on vacation, serving us beer and Andalusian octopus when they decide to follow the same path as the rest of society?

Who knows. It is possible that, thanks to this change, we are in front of a future where the waiters will start to smile and do their work with greatness; because dignity shows itself where there are limits. In contrast, the franchises and the darkness delivery You will gain strength to handle the less forgiving schedules.

Pop a beer, come in and see how this all unfolds.

Carles Armengol is a psychologist specializing in the analysis of social trends, gastronomy and consumer habits. When he talks about reconciliation – or lack thereof – he does so consciously, as anyone who has read his first book knows: Collado, the curse of a restaurant.

- Advertisement -
Share
Facebook
Twitter
Pinterest
WhatsApp
Previous article“I’m sick of it”: Don Day explodes and bursts into tears during a live TV program
Next articleGoya’s frescoes in Madrid are endangered due to the poor condition of the roof of the church that houses them