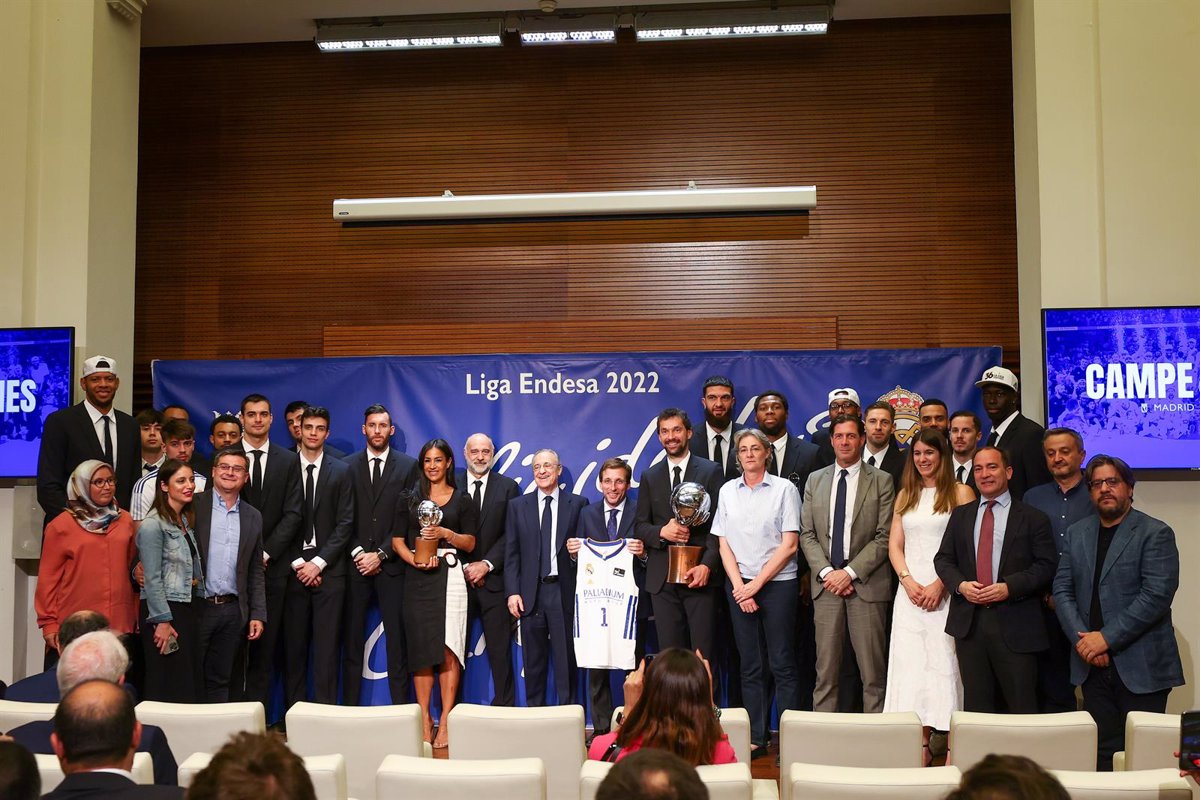 The Real Madrid basketball team celebrated this Monday in the Community of Madrid and in the City Council the success of the Endesa League 2021-2022, the thirty-sixth of their record, won “with special emotion”, supported by “an indestructible faith”. and “with an absolutely exemplary human behavior”.

The Madrid team used the afternoon to visit the city’s regional and municipal headquarters, where they received congratulations from President Isabel Díaz Ayuso and Mayor José Luis Martínez-Almeida, as well as the affection of the fans who followed them.

The first stop was in the Community of Madrid, where Isabel Díaz Ayuso congratulated him for continuing with “the harvest of triumphs”. “They tell us that if we position ourselves for one thing or another and I’m one of all the teams in the region, but the fact is that Real Madrid do nothing but make people happy,” he said.

“This league has been one of the most exciting of the last ones he has won and it’s not just the 36th, it’s the sixth for Pablo Laso to whom I give the love of the fans and of all the people who love sport”, he hinted about Vitoria’s coach, who highlighted his “attitude towards his recovery” after the heart attack. “It shows the strength of this team,” he said.

Díaz Ayuso recalled that against all odds, Real Madrid “didn’t stop rowing” and that they “showed an indestructible faith and devotion that spread to the WiZink Center fans”. “He had a bad run, he knew how to overcome it and you came through the Puerta del Sol as heroes, but that’s Real Madrid’s DNA,” he said.

For the regional president it was “difficult to get up” after losing the finals of the Copa del Rey and the Euroleague, but Madrid “rebelled against their fate” and finally demonstrated “their superiority over their rivals”.

“Let the kids know that champions are forged through effort. None of you were destined to become basketball stars, but while some left after training, they followed and are now part of a legendary club. They are Real Madrid and Madrid and responsible for ensuring that basketball continues to grow in our community. There is no Real Madrid for football or basketball, there is Real Madrid,” he concluded.

MARTÍNEZ-ALMEIDA: “YOU ARE REAL HEROES THIS SEASON”

The team later went to City Hall, where they were received by Mayor José Luis Martínez-Almeida, who described the players as “the real heroes of the season”. “We transfer the pride of the whole city to this sporting achievement,” he said.

“What has happened in all these months is not just a sporting achievement, but from a human point of view absolutely exemplary behavior. So many disasters have happened to you and it’s not that you’ve responded to that in sporting terms, it’s that you’re a human role model for the city,” he said.

Because of this, he believes “if people are wondering what Real Madrid is, they need to look at the basketball team this season”. “What I do best is winning but the values ​​on this occasion take this feat beyond sport,” he noted.

“Any team whose coach has to drop out just before the finals is certainly not in a position to do it like you, but Pablo’s example has guided you, although he is just as important as his technical team, because without that community it would be impossible Chus and his assistants could have guided them,” the councilman said.

FLORENTINO PÉREZ: “WE ALL KNOW IT’S NO OTHER LEAGUE”

The Real Madrid president stressed that this league is Endesa “a new title and a victory with special emotions”. “We all know it’s not just another league, it symbolizes what this group of players really is, who have fought against adversity, who have shown perseverance, talent and an unstoppable thirst for victory and courage,” he said.

The leader warned that “all titles are achieved with much sacrifice and effort”. “This league has an attitude and strength that is reserved for only very special players who have managed to keep rising in the face of a multitude of adversities. It’s a very special group that never tires of winning,” he said.

The leader recalled that the team “draw strength from where it seemed impossible”. “When all the difficulties came together, he believed in this way of dealing with adversity that Real Madrid has and that is etched in its DNA and in a shield that represents a determination that you never have to give up,” he pointed out.

For the president, this Endesa league represents “the triumph of work, camaraderie and humility” and is an “important reflection” of Real Madrid’s values, which he summed up in “Real Madrid Above All”.

“It was one of the toughest seasons we’ve had to go through,” he insisted, highlighting Sergio Llull’s “wonderful and exciting gesture” to Pablo Laso at the time of the trophy presentation. “You have to be proud of those players who remembered you,” he admitted, making it clear that “all madridistas are proud” of him and that they hope to see him “fully recovered”.

“The spirit you have shown is a dream for me as President. Dear Pablo, thank you for spearheading this cycle of triumphs that makes our legend great,” continued Pérez, not forgetting Chus Mateo, who ” brilliant”. and who was deeply fond of Rudy Fernández, who lost his father last May, with “sentimental words for your families and those who are not here and who have helped you to be here and to be better.”

The madridista president believes the season “was exceptional” and that this team “can rise to any challenge” while praising “the magical alliance” with the fans that makes them “invincible”. He also congratulated Juan Carlos Sánchez, head of the section, for his “capacity and dedication” along with Alberto Herreros and also FC Barcelona, ​​​​​​”a great rival that gives even more merit to this title”. “We must continue to build this wonderful legacy because the legend must continue,” he said.

For his part, captain Sergio Llull “congratulated the players and the coaching staff” after a new success after “a very tough year with many setbacks”. “Everything happened to us, even the coach had a heart attack,” he said with a smile.

The base, who nodded to Florentino Pérez, what a “gift in the form of a bonus”, thanked Juan Carlos Sánchez and Alberto Herreros because they always help them “improve” and “those who do not appear in front of the cameras”, because without them they “would not be celebrating a new title” and because “they are an integral part of this team and club”.