Ramadan in Iraq.. War comes to the fasting table 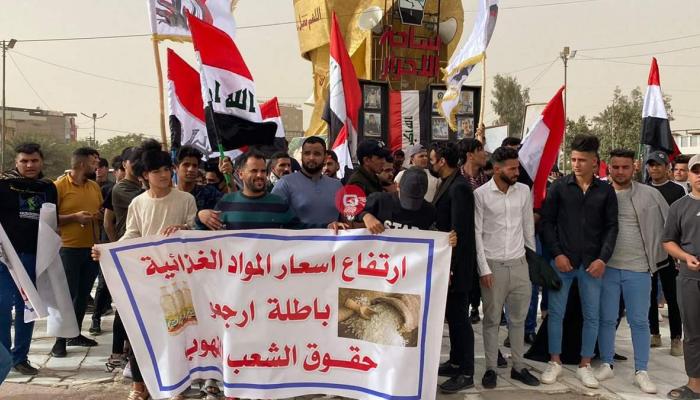 The Iraqi citizen is bearing the brunt of rising prices for food and consumer goods, which are on the rise as we approach the month of Ramadan.

At a time when the competent authorities are struggling to control the wave of extremism and prosecute speculators.

For more than a year and a half, Iraq has seen rising prices for many consumer goods and merchandise, following the rise in the exchange value of the dollar against the Iraqi dinar by financial authorities in Baghdad, in the face of the financial crisis that experienced country in the summer of 2020.

Over time, prices seemed stable and halted in the rise seen after the decision to cut the Iraqi dinar, but the fallout from the Russo-Ukrainian war pushed Iraqi markets into a second wave of high prices which was reflected in the living reality of the simple Iraqi individual.

The signs of the new crisis appeared in the rise in the prices of wheat, rice and edible oil, after they recorded a jump of more than double their value prior to those events.

The rise in prices caused a wave of indignation in popular and public circles, accompanied by demonstrations in different regions of Iraq in protest at the worsening of this crisis.

As a result, the government took urgent and swift action, including forming a crisis cell to monitor prices and conducting field teams to go after speculators and monopoly traders in goods and consumer goods.

Despite this, prices are still at their high ceiling without these measures and treatments helping to move them back in a way that reassures the Iraqi individual and ensures their food needs according to their living capacity.

Observers of Iraqi economic affairs attribute the reasons for the increase in food prices of flour and edible oil to the approach of the month of Ramadan, which usually sees a large movement of purchases by citizens in the storage of food products, which increases demand. and lack of supply.

The economic expert, Nasser Al-Kinani, confirms to “Al-Ain Al-Akhbariya”, that “the wave of high prices that Iraq is experiencing is caused by many overlapping reasons and prolonged for two years, which left a fragile situation for the escalation of this crisis.

Al-Kinani emphasizes the need for the Ministry of Commerce to import all food products directly and direct them to agents to be distributed later through the ration card items for the Iraqi citizen.

And the vice president of parliament, Hakim Al-Zamili, revealed in follow-up to the price hike crisis, in recent days, that there are movements by some merchants to hoard and store flour and vegetable margarine foods with the aim of withdrawing them. from the market and then sell them at twice the price.

The ministry confirmed in a statement: “The result of electronic transformation by implementing work on the Qout electronic network integrated system will greatly facilitate the management of receiving imported and locally traded grain, transferring it between silos, preparing it for mills, and accelerating flour processing.

The economic expert, Salam Sumaisem, affirms that “the electronic transformation in the points of commerce and import will reflect positively in the restriction of the corruption that drives this crisis and the other challenges that it poses”.

Sumaisem points out that the infrastructure for the management of the country’s resources suffers from weakness and allows manipulation and loss, which was evidenced during the current crisis that the country is experiencing in the rise in food prices.

Regarding the nature of this crisis, Sumaisem confirms to “Al-Ain Al-Akhbar”, that “one part is related to what is happening in Eastern Europe after the Russian war, and another is related to the internal situation and the circumstances in which he came”.

The Ministry of Commerce had paid for two portions of the ration card items for two consecutive months, which included flour and oil, with the aim of supplying them and reducing demand for them in local markets.

The official spokesman for the Iraqi Ministry of Commerce, Muhammad Hanoun, confirms to “Al-Ain Al-News”, that “there is a strategic reserve of wheat that is sufficient for the next two months until the beginning of the agricultural harvest season.” ”

The wheat harvest season begins in Iraq at the beginning of next May, amid expectations that this will meet more than 60% of the country’s needs.

Years ago, and through more than one campaign, Iraq achieved self-sufficiency in wheat, but due to the repercussions of the water crisis that recently worsened in the country, the agricultural plan was cut in half for the cultivation of wheat, corn and rice

According to the official spokesperson, speaking on behalf of the Ministry of Commerce, local wheat prices have risen since the beginning of the crisis and have recently jumped from 600 to about 780,000 dinars per tonne.

And Commerce Minister Alaa Al-Jubouri confirmed last week that his ministry is working to prepare a strategic wheat reserve by importing 3 million tons and allocating $100 million for urgent purchases.

World markets saw wheat prices spike after the Russo-Ukrainian war, in which a tonne of wheat reached $600, after not exceeding $300.

The real need for wheat in the country is around one million tons of wheat per month, of which some 450 thousand tons are used to prepare the items for the ration card.

Iraq needs to import about 3.5 million tons of wheat a year, depending on international sources, including the United States, Australia and Canada.

The Russo-Ukrainian war, which broke out on the 24th of last month, caused a rise in most levels, including food and crude oil prices.

Russia is the world’s largest wheat exporter, while Ukraine is the fifth largest and is described as the breadbasket of Europe.