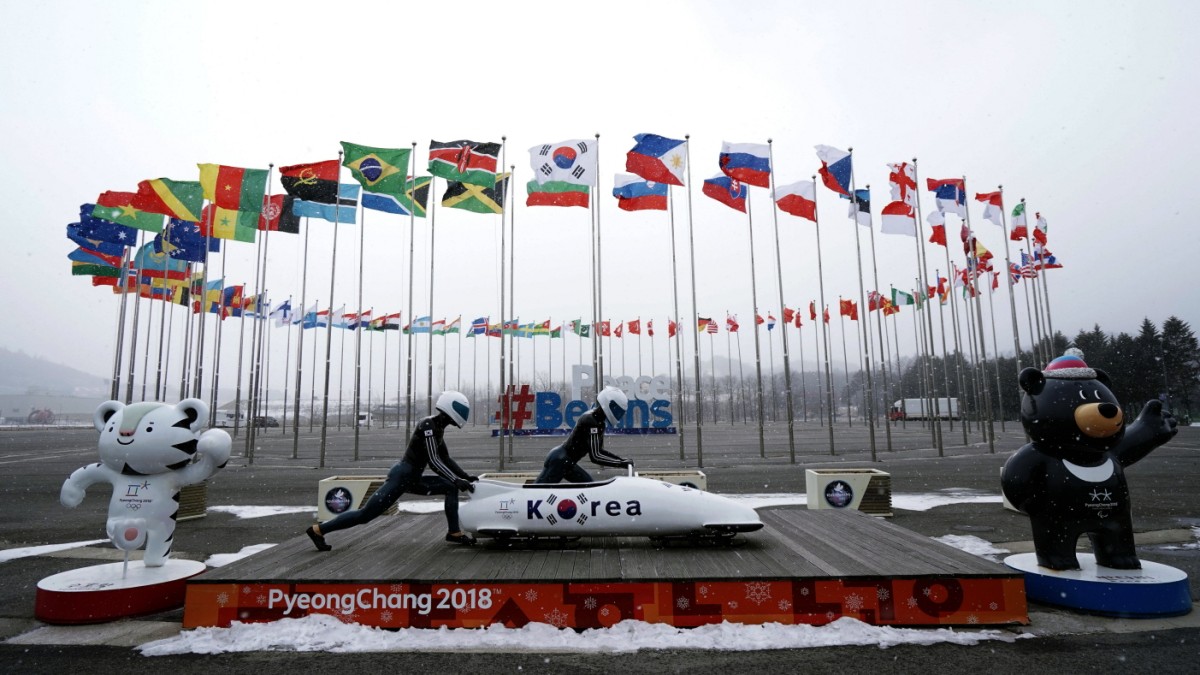 The best way to get an overview is to take a walk in the sky. Then onto the gondola that takes visitors to the Alpensia resort in Pyeongchang County, South Korea, to the ski jump tower. Along the landing slope, the journey continues on a gentle path to the top of the hill. The 93-meter tower rises between a parking lot and a sculpture garden. The observation deck is on the fourth floor. There, through the large windows, you can take a tour of the landscape of the South Korean Winter Olympics and see its urbanized nature: the toboggan run that winds up the opposite hill to the south. The ski slopes next door. The apartment blocks of the former Olympic Village to the west. The cross country center to the north against the silhouette of the Taebaek Mountains with wind turbines spinning peacefully in the distance.

Four years have passed since this landscape shone. The Pyeongchang Winter Olympics were not without effect. For two weeks in February 2018, Alpensia was a center of the world of sport. A lot has been said about PyeongChang before that, because that’s where all the world-class snowboarders, skiers, and skaters wanted to go. And then Pyeongchang appeared on television again at the Paralympics, the world sports games for the disabled. The organizers’ calculations seemed to be working. PR for a newly created tourist paradise.

And now? If you look from the Schanzenturm to the deserted Olympic landscape and wonder if this great festival was really good for the area.

The Winter Olympics are an investment in ski tourism and the development of distant regions for governments and businesses. That was also the case in South Korea. The sparsely populated province of Gangwon, where Pyeongchang is located, should come alive with more guests from around the world. The games cost South Korea at least 13 billion US dollars. New roads were built and a new high-speed rail link was established between the capital Seoul in the west and the city of Gangneung on the east coast, which was the venue for ice sports competitions at the Games.

But skiing is expensive and has little tradition in a country like South Korea. Additionally, Olympic sports such as ski jumping and bobsled require venues that are difficult to market to the general public. Sustainable use after the festival is a challenge. You need a good plan for that. And Pyeongchang didn’t have that at first.

It’s a sunny Wednesday in early March in Daegwallyeong, the Pyeongchang county township where the Alpensia facility and the site of the 2018 Olympic Stadium are located. The ski season has just ended. It’s not hard to confirm the stereotype of the post-Olympic hangover. Because little happens.

The international media has already written a lot about the failed tourist destinations in Pyeongchang. Only recently was the New York Times there, quoting Shim Dal-seop of a local rice wine shop, among others, who said, “Nothing has really changed.” The square where the opening ceremony took place in 2018 acts as a symbol of emptiness. The 35,000-seat stadium was dismantled immediately after the games, leaving empty space between the grassy hills. The torch in which the Olympic flame was then burning stands alone. The large letters on the edge of the square form the word “Dream Show.” One wonders: What program dreamed?

“When the games were over, many left.”

But it is also not true that nothing is happening. A hotel operator is building new apartments in the village. Last year, after many failed attempts, Gangwon Province finally sold the heavily indebted Alpensia resort to a KH Group subsidiary for nearly $630 million. Land prices are going up. In the pandemic, a wave of international travel could not develop. In return, many locals came to relax and sports teams to train on the new roads. “Sometimes it was impossible to get housing,” says Arram Kim of the Pyeongchang 2018 Legacy Foundation.

Arram Kim sits in the cafeteria of the Olympic Museum, which opened in February 2021 on the site of the decommissioned Olympic Stadium. He conveys a lot of optimism. He has to too, because he’s the one who’s supposed to make Pyeongchang’s Olympic legacy profitable with ideas.

At the Olympics, he was the race director for the skeleton competitions, as well as being responsible for the Olympic education program. It bothered him that hardly anyone in the Organizing Committee thought about how to protect the legacy of the Games. “Everyone was so busy making the best games that they didn’t have time to do it,” Kim says, “and when the games were over, a lot of people left because their contracts were up.” Thus, he founded his own foundation in order to continue offering his education program through sports in schools. When the South Korean government finally launched its own legacy foundation in March 2019, he became head of the education department there.

So now the foundation is trying to organize life after the games. Arram Kim says that a lot has happened. Camps where students can learn about skeleton, cross-country skiing, or Paralympic sports like sledge hockey. Programs in which athletes from Asian countries that do not practice winter sports learned how to bobsleigh. competitions training sessions. And the groomed trails at the cross-country ski center are open to everyone. “Overall, we’ve done a reasonable job of using the facilities,” says Kim. There are also summer bobsleigh plans and tourist courses with former athletes.

But the legacy of the plants remains a subsidy operation. And it wasn’t just because of the pandemic. Arram Kim says: “We have to promote our Olympic venues.”

So people didn’t really think about that before the games: how Pyeongchang will continue to be an attraction and work as a cohesive sports park for everyone in the long run. It is not very convenient to get to Daegwallyeong without a car. The bullet train stops at Jinbu, and it takes a 20-minute taxi ride to the museum from there. The walks between the Alpensia plants run along paved paths. There is a car sharing service at Jinbu Station. But there are no shuttle buses, nor guided tours of the sports facilities.

You can still come. Because in Pyeongchang you can also see signs that the new winter sports culture has a future here. Young Koreans from a cross-country ski team train on the thousands of trails. In 2024, the Youth Olympic Games will be held in Pyeongchang. And in the ski jump tower there is no other traveler. But when you look at the art world of Alpensia, it also becomes clear: something like this is very rare in Asia.

corona restrictions: South Korea requires, as of March 9, 2022, a negative PCR test from all travelers, regardless of nationality and vaccination status, within 48 hours before departure. Upon arrival, all travelers must undergo a seven-day quarantine. This can be completed at private accommodation or at a state quarantine facility which is subject to a fee. The latter costs 120,000 won a day, the equivalent of almost 90 euros. Because regulations can change quickly, you should check with the South Korean embassy before you travel.

Arrival in Pyeongchang: From Seoul, a KTX bullet train runs several times a day to Jinbu in an hour and a half. From there, it takes about 20 minutes by taxi to Daegwallyeong Township hotels or Olympic venues.

travel information: A lot of information about destinations in Gangwon province, which hosted the 2018 Olympic Games, can be found at www.gangwon.to/en