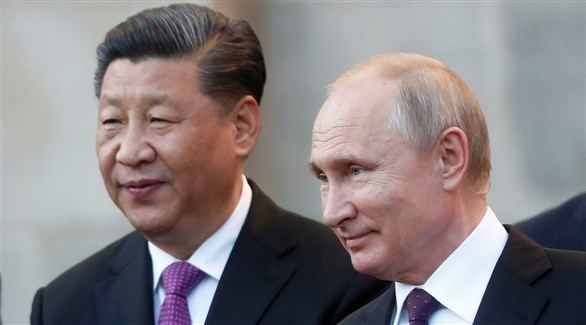 When the president of the United States warned his Chinese counterpart, on Friday, March 18, of the consequences of supporting Russia with weapons or equipping it with elements of constancy, the Chinese president responded with a popular proverb: “Whoever hangs the bell on the tiger’s neck will be taken off.” This indicates that China believes that the United States is the cause of the Ukraine crisis and should find a solution, not threaten China.

On the other hand, Russian President Vladimir Putin told a crowd in Crimea that the Russian special operation in Ukraine is going ahead and going according to plan. And shortly before, President Putin threatened that “whoever supports the Ukrainians and puts our lives at risk will have consequences unprecedented in history.” Allusion to the use of nuclear weapons.

What does this Chinese position and Russia’s strong response mean? First, it means that President Putin has decided that his security requires a grand adventure, even if he ends nuclear weapons, it also means that China has decided – possibly – that it will not let Russia be defeated; Because that will mean pointing them out in the future; Second, it means that the United States and its allies are faced with the option of confrontation, and that their withdrawal does not mean their military defeat; Rather it means a defeat of liberalism, which they consider the best model for humanity. The Chinese president, for example, did not hide that his regime is better than liberalism, and that China, thanks to the Chinese (authoritarian) model, was able to rise quickly to the top, and that it does not suffer from economic problems. or social problems such as
Liberal regimes suffer. More than that, the Chinese leadership sees that the priority is not freedom; Rather, for the economy and to feed an empty intestine.

The Russian president also believes that the liberal system is a failed system that is not suitable for Russia, and that the values ​​of liberalism contradict those of Russia, and that liberalism works to destroy societies, forcing them to abandon their values ​​and history and adopt new ones. values. Among Putin’s most prominent accusations of liberalism is that he calls for homosexuality and decadence; Therefore, he considered those among the Russians who oppose Russia in what he called the “Special Operation in Ukraine” to belong to liberalism despite their presence on Russian soil, and described them as traitors and scum.

Apart from these descriptions above, there are important calculations dictated by the interests of the countries in conflict; The United States, since the collapse of the Soviet Union, suffers from Russia; because he is fully aware that it will be a big problem in the future; Europe also knows that a strong Russia will pose a threat to it and its stability. Europe realizes that Russia is big and powerful, and cannot be subservient to the United States, but at the same time it cannot be a great power. It seems that American leaders, and in particular President Clinton, did not understand this axiom, so he proceeded to treat Russia as the vanquished, without thinking about how to tempt Russia into his orbit voluntarily and not by coercion. The Americans also bet on President Boris Yeltsin as a reformer, even though they knew he was drunk, as his Foreign Minister Andrei Kozyrev says, and that Polish President Lech Walesa, after getting drunk, was able to get approval from him for Poland to join NATO. Due to Yeltsin’s weakness, Putin and the hardliners came to power; These hardliners did not shake the mentality of the Soviet Union; They worked to get it back.
They got rid of the reformists, either by displacement or by assassination; And with this, Russia returned to an old path: it is neither European nor Asian.

This reality generated the return of the Russian national religious tide, and the belief in the great Russia, but the accounts of the field do not coincide with the accounts of the era; Russia, despite its enormous size, does not exceed 1.49 billion dollars in national product, less than Italy (1.89 billion dollars), while the production of the United States is 20.9 billion and that of China of about 14.7 billion dollars. So Russia, which aspires to greatness, has de facto become the prey of two great powers: China and the United States. China does not want Russia to be a superpower; Because this has historically been, and still is, a threat to her security, and the United States does not want Russia to dominate Europe and wants it to be subordinate to it. Therefore, China and the United States, despite their disagreement on how to deal with Russia, tacitly agree on one goal: to reduce Russia and subjugate it to its interests.

As for Europe, its disdain for Russia, after the fall of the Soviet Union, was the wrong distinction. Europe is the most affected by Russia, but it did not understand the historical opportunity presented by the fall of the Soviet Union; Historically, Europe looks down on Russia and refuses to give it a proper place. Therefore, he neglected to correct this historical error and proceeded to establish strict specifications that Russia must meet in order to enter the European economic system; These specifications were not accompanied by massive economic aid similar to that of Germany after World War II; Rather, it was accompanied by an escalation of conditions and tolerance with the Russian oligarchy who plundered the money of the Russian people and deposited it in the banks of Europe. This behavior gave hard-line nationalists, led by Putin, evidence that Russia is in danger and that the Russians must defend the country from it; Then Putin described the collapse of the Soviet Union as the greatest catastrophe of the 20th century. Therefore, you can understand Putin’s behavior, his fear of the West and his need to go to China to balance this war, which he called existential.

Thus, Putin led his country into a crisis greater than the crisis in Ukraine. A crisis represented by their need for China and by having to give up a lot, and this contradicts their national logic and the position of Russia; As well as having to advance in the confrontation with the West, despite the difficulty of winning this long battle, threatening the possibility of using nuclear weapons, but this threat will lead to the destruction of Russia; Because her opponents are more powerful nuclear; Therefore, Putin’s options are narrowing day by day, and he has no choice but to put more eggs in China’s basket, or continue with the confrontation, and with it the possibility that the Russian oligarchy will become his against, or is forced to accept a settlement. which saves a minimum of face.