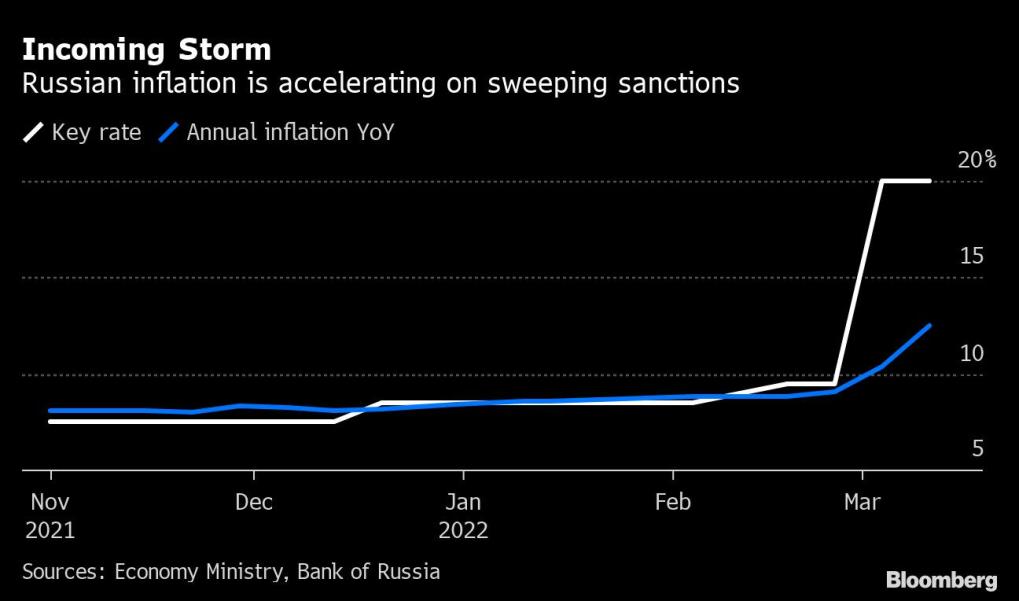 (Bloomberg) — The Bank of Russia left interest rates at their highest level in nearly two decades, in a decision hours after President Vladimir Putin nominated Governor Elvira Nabiullina for a third term.

Following an emergency rate hike just over two weeks ago, Russia’s central bank admitted the extent of the damage to the economy following the unprecedented sanctions over the invasion of Ukraine, and noted that output will contract in coming quarters, while inflation will not return to its target level of 4% until 2024.

The benchmark index will remain at 20%, in line with the forecasts of most economists surveyed by Bloomberg.

“The Russian economy is entering a phase of large-scale structural transformation that will be accompanied by a temporary but unavoidable period of rising inflation,” the policymakers said in a statement.

Nabiúllina said the bank would provide new economic forecasts in April and that its recent rate doubling had been a temporary anti-crisis measure.

The ruble reversed gains after the decision and was trading 2% weaker against the dollar as of 3:04 pm in Moscow, headed for its first drop in more than a week.

The governor, who has been in office since 2013, will need to rethink policies that in recent years have largely focused on inflation targeting and the accumulation of foreign reserves. However, economic defenses have faltered in the face of sanctions that rattled the economy and the ruble, leading to the seizure of about two-thirds of the central bank’s $643 billion holdings.

The Bank of Russia responded by restricting foreign exchange transactions, imposing mandatory foreign exchange sales by exporters and raising its key rate. On Friday, he said that government bonds known as OFZ on Monday to ensure financial stability and will sell them when the market stabilizes.

The war and its aftermath have inflicted a domestic cost that is already comparable to the worst recessions in Putin’s more than two decades in power.

Meanwhile, capital controls, a closed stock market and a standstill in trade are taking the spotlight away from rates as the go-to tool for restoring calm to Russia. But with inflation near levels not seen since the government’s debt default in 1998, policymakers must keep borrowing costs high to maintain depositor confidence and prevent capital flight.