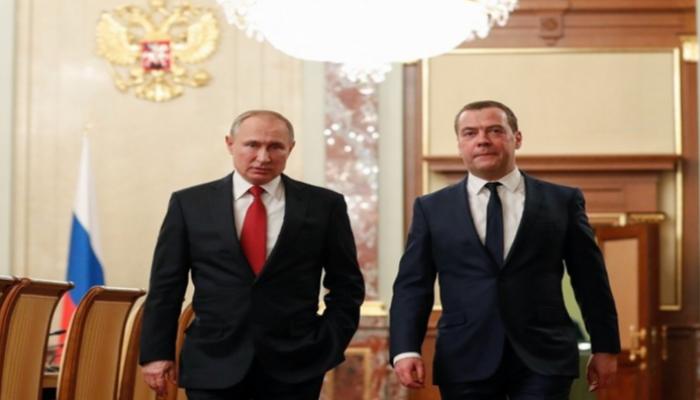 Medvedev, who served as president from 2008 to 2012 and is now deputy secretary general of Russia’s Security Council, said the world could be headed for a catastrophic nuclear war if it continues to carry out what the Kremlin sees as a long-running plot to destroy Russia.

“The United States has planned to destroy Russia since the fall of the Soviet Union in 1991, and this means that Russia must be humiliated, undermined, crushed, divided and destroyed,” Medvedev added in a 550-word statement.

He continued: “The Kremlin will never allow Russia to be destroyed,” but warned Washington that if it achieves what it described as its destructive goals, the world could face a catastrophic crisis ending in a “major nuclear explosion.”

Medvedev noted that “the destruction of the world’s largest country in terms of area could lead to the installation of unstable leadership in Moscow, which has the largest number of targeted nuclear weapons in the United States and Europe.”

He added that the collapse of Russia would lead to the formation of 5 or 6 nuclear-armed states on Eurasian lands led by “maniacs, fanatics and extremists.”

He continued: “Is this a catastrophic picture of the world or crazy expectations for the future? Is it pure fantasy? No.”

Medvedev’s opinion, once considered one of the less aggressive figures in Putin’s inner circle, offers a glimpse into the way the Kremlin thinks at a time when Moscow finds itself in its biggest confrontation with the West since the crisis. of the Cuban missiles of 1962.

The United States has repeatedly said that it does not want Russia to collapse and that Russia’s prosperity, stability, and openness to the world are in America’s own interest.

Russia’s military operation in Ukraine has raised fears of a broader confrontation between Russia and the United States, the world’s two biggest nuclear powers.

Putin says the operation is necessary because the United States was using Ukraine to threaten Russia and Moscow had to act to repel what it called a “genocide” of Russian-speakers inside Ukraine, while Ukraine says accusations of genocide by Putin are “completely absurd”.