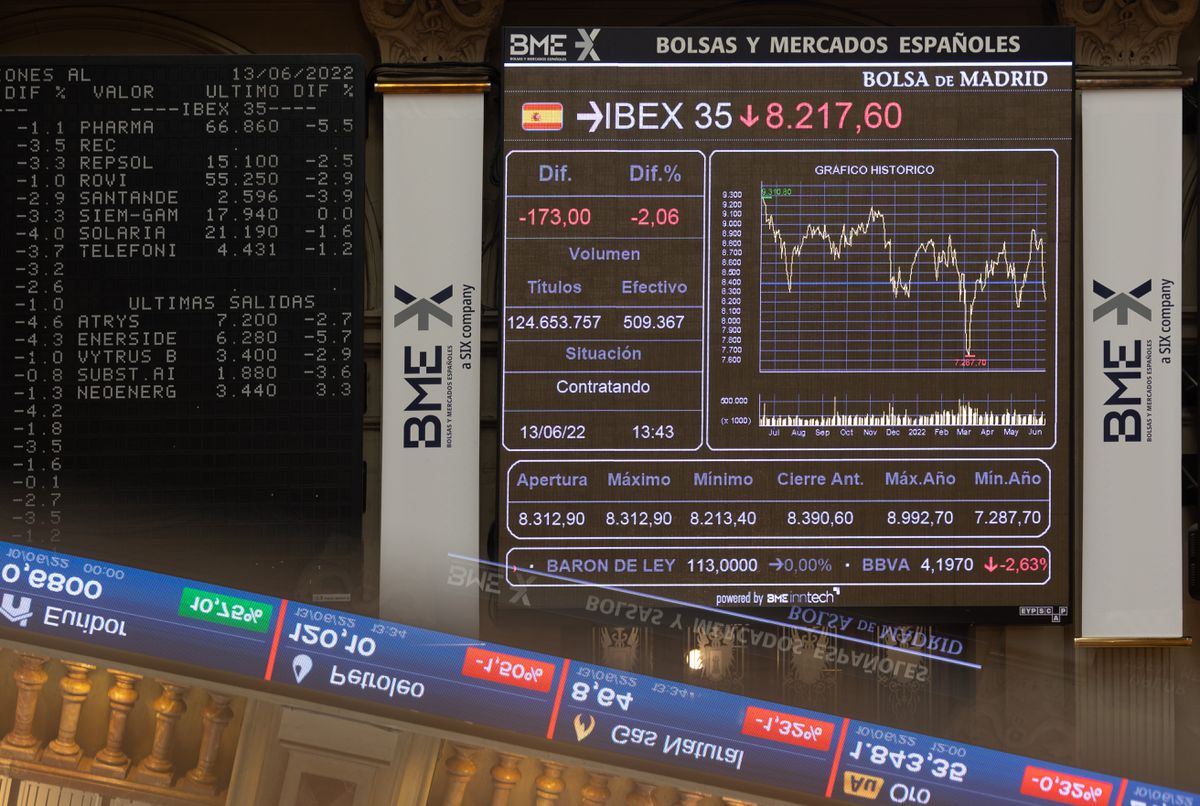 Markets have entered free fall in recent sessions. Bad inflation data puts pressure on central banks. And a more than expected tightening in monetary conditions could unravel the global economy, especially after a decade of depending on liquidity manna in the form of negative interest rates. In this context of nervousness and volatility, there are numerous listed Spanish companies reporting movements, mainly purchases, in their own shares to the National Securities Market Commission (CNMV).

“Treasury stock management is a way of maintaining the price of securities during times when there are strong sell orders in the market, like the markets are seeing right now,” said Sergio Ávila, an analyst at IG. “The buyback can help boost public confidence in the company as it would show it has sufficient funds to pay investors.” However, the impression can also be given that the company does not see strong growth potential,” adds Ávila.

The large listed Spanish companies included in the Ibex 35 currently accumulate treasury shares worth 7,465 million euros. Since June, up to 11 corporations have reported increases in their own shares to the stock exchange regulator. The one that fattened its piggy bank the most was BBVA, which rose from 1.91% in December to 7.184% in early June. “The increase in the overall position is explained by fluctuations due to the share buyback program,” bank sources explain. In fact, the group chaired by Carlos Torres has already written off part of the repurchased shares and its accountant has remained at 3.4%.

Their own shares Acerinox (from 0.4% to 3.14%), Cie Automotive (from 0.01% to 2.05%) and Laboratorios Rovi (from 2.11% to 4.79%) have also increased significantly . %). “I think the increase in own stock trading gives the idea that many companies are not clear about what lies ahead, are assessing problems in finding viable investments for growth and are deciding to use these resources for themselves,” says Javier Molina, spokesman in Spain eToro. According to this expert, the administration of one’s own titles is typical for economic situations of strong deceleration. “The latest inflation data confirms that it has not yet peaked and the market is pricing in a sharp rise in interest rates. In this context, consumer confidence has deteriorated and expects a recessionary environment,” adds Molina.

Within the Ibex 35, only three companies (Aena, Enagás and Solaria) have the Treasury Stock Counter at zero. The company with the most treasury shares is ACS with 7.99% of the capital. In second place is BBVA with 7.184% and Rovi is in third place (4.79%). Other large companies listed on the national market have more modest positions: Banco Santander holds 1.51%, Endesa 0.138%, Iberdrola 2.362%, Repsol 2.352% and Telefónica 0.18%.

The treasury was traditionally used as a Swiss army knife. That means it has multiple uses. In the downward moments of the price, it can serve to stabilize the prices. For smaller securities, companies enter into contracts with brokers that must be reported to the market so that they can provide liquidity to the stock and avoid situations of extreme volatility when demand does not match supply. Treasury stock is also an instrument of shareholder compensation, either through distribution or amortization (exit increases earnings per share). They are also a tool for compliance with compensation plans (warehouse oroptions) with directors and senior managers. Finally, in some cases treasury shares can be used to prevent unwanted takeover bids.

“Own shares will be used a lot for buybacks this year (buy back) as shareholder compensation (tax efficient than cash payments) and to fulfill employee and director stock plans, in addition to value maintenance operations or market making“, emphasizes Juan M. Prieto, responsible for the Proxy Advisor (Company that advises on the importance of institutional investors at shareholder meetings). In 2009, following an amendment to the Stock Corporation Act, the maximum number of shares that a listed company can hold in its own portfolio was increased from 5% to 10% of the capital (it is 20% for unlisted companies). Another change introduced at the time was the extension to five years of the duration of the authorization granted by the board to directors to acquire their own shares, previously set at a maximum of 18 months. “If the Council is on the agenda to renew the mandate to buy own securities, we advise our clients to vote yes as long as the buy or sell margin does not exceed 10% of the market price of the shares. . Above this premium, there is a risk of price distortions,” argues Priego.

The use of treasury stock is required by law, as is the transparency and publicity that must accompany buyback programs implemented by companies. However, the multiple use of this tool sometimes leads to potential market manipulation situations. A study published by the National Securities Market Commission (CNMV) in its bulletin in late 2019 recognized that this risk of fraudulent use was high. “In the Spanish case, there are numerous discretionary treasury stock deals outside of a safe position,” recognized the paper’s authors, Maribel Sáez and María Gutiérrez, professors at the Autonomous University and Carlos III, respectively.

When these experts speak of a safe haven or Safe haven, relate to the purchase and sale of own shares without suspicion of market manipulation, as provided for by the legislature and which can be summarized into two: transactions under a share buyback program for the purpose of amortization, compensation or cash acquisitions; and contracts with a broker to add liquidity to the price. Sergio Ávila does not share this risk of fraud: “Companies have to declare the amount of money they will use to buy back their own shares, so the market tends to estimate when the shares can go up with that money. It’s more than a manipulation, it’s a way of maintaining the price and giving credibility to the company.”

Death of 21 teenagers: More than South Africa’s ‘tavern of death’