Prince Harry + Duchess Meghan: The Queen referred them to their places at the service 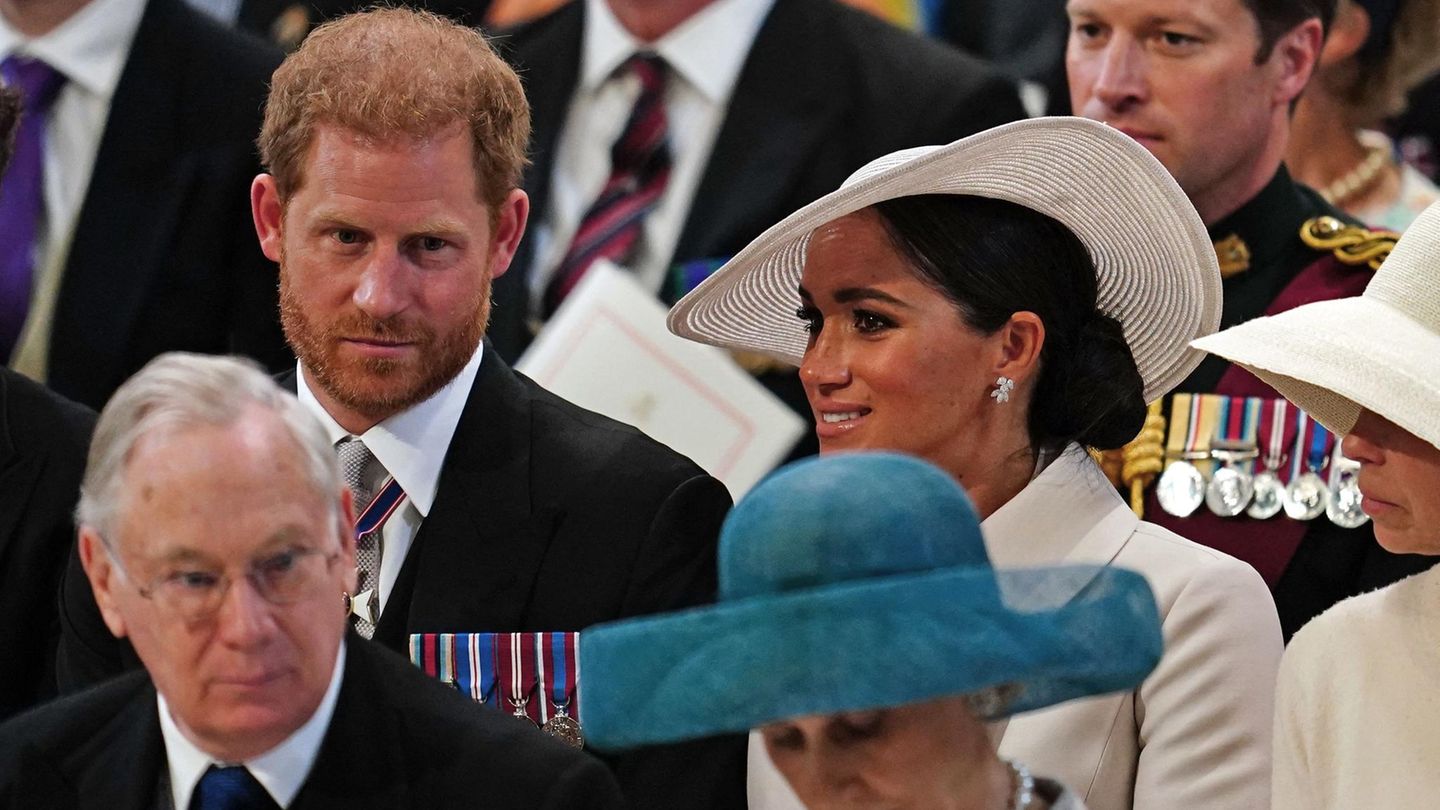 Her appearance initially looked like a furious throwback: When Prince Harry and Duchess Meghan appeared at Queen Elizabeth’s thanksgiving service on her platinum birthday, all eyes were on her. But then the Sussexes were escorted to their seats and publicly demoted as family members. An order that would have been given by the queen herself.

These weren’t exactly the ‘cheap’ places Prince Harry, 37, and Duchess Meghan, 40, were allowed to sit at the service for Queen Elizabeth, 96, in St. Paul’s Cathedral in London. After all, the couple were in the best royal company: the Sussexes were seated next to Princess Eugenie, 32, her husband Jack Brooksbank, 36, and Lady Sarah Chatto, 58, daughter of Princess Margaret, † 71, and behind Prince Edward’s family, 58. Nonetheless, their placement was like a beacon: the couple are only second in line – and a reasonable distance from heir to the throne Prince Charles, 73, his wife Duchess Camilla, 75, and the Cambridges.

Prince Harry and Duchess Meghan: Does the Queen want to slow down the couple?

For Harry in particular, this should be a new experience. Before the Sussexes dropped out of the top tier of the Royals, he belonged to the front group around his father, Prince William, 40, and Duchess Catherine, 40. Following the spectacular exit of the Queen’s grandson and his wife from ‘company’, as the Windsors refer to the royal family themselves, and explosive interviews, including serious allegations against British relatives, apparently the Queen she herself set the example with the public ban. At least that’s what author Tom Bower claims in his revealing new biography “Revenge: Meghan, Harry and the war between the Windsors.”

Shortly before publication on July 21, 2022, the “Daily Telegraph” reported an “explosive” story from the book, which allegedly occurred shortly before Prince Philips’ funeral, † 99, in April 2021. The newly widow reportedly expressed relief that her grandson’s wife was not attending the funeral, saying: “Thank God Meghan is not coming.” An alleged statement which is probably not so much linked to his own relationship with the forties, but much more to his ability to attract attention. “She didn’t want Meghan to distract from her husband and the ceremony and knew that would happen if Meghan came,” Bower said.

The Sussexes are said to have planned a “grand entrance”.

The Queen’s decision to keep the Sussexes off the stage as much as possible during her Thanksgiving service would be consistent, the author believes. “I think it was voiced again on the anniversary,” Bower now explains in an interview with “GB News,” and continues, “I mean, what I heard was a really remarkable story, to know that Meghan and Harry deliberately late for St Paul’s Cathedral so they can have their own grand entrance.”

Did an exchange of blows with the bailiff really take place?

From a supposedly ‘impeccable’ source, he had the information that Harry and Meghan even wanted to change the seating arrangement when their turn arrived. “As they walked down the aisle and sat in ninth and tenth place, they said, ‘Well, everybody should slide so we can sit in the aisle. “But the escort staff seemed adamant: ‘No,’ the usher said,” Bower explained. ”No, you have to [auf] nine and ten sit down.'”

Prince Harry and the Duchess were escorted to their seats in the middle of the second row of seats for members of the royal family, which was some distance from the seats of Prince Charles, Duchess Camilla, Prince William and Duchess Catherine.

According to Bowers’ source, Harry then asked, “Who told you to tell me where I can sit?” He then received the answer: “Your grandmother”. However, judging from the footage of Harry and Meghan’s arrival at the cathedral, it appears there was no in-depth conversation between the Duke of Sussex and the usher. On the contrary: the couple seems to have quickly found their way from their loved ones to their assigned places. Buckingham Palace has so far declined to comment.