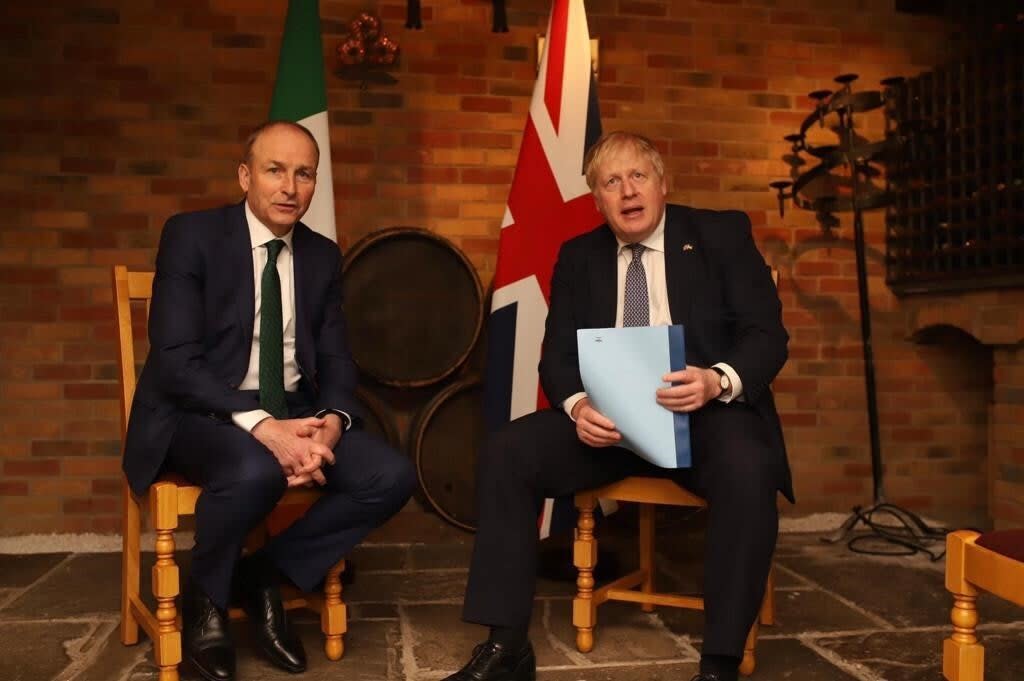 Boris Johnson and Irish Prime Minister Micheal Martin discussed their “deep concern” over the “escalation of hostilities” near the Ukrainian capital Kiev at a bilateral meeting in London.

The prime minister said this was a “critical moment” for Ukraine, as well as for European and international security in general, when he joined the Taoiseach for talks on Saturday afternoon.

Hours earlier, the Defense Ministry (MoD) said fighting was continuing in northwest Kiev, with the bulk of Russian ground forces some 25 kilometers from its center.

Meanwhile, the Ukrainian government said a mosque in the city of Mariupol had been bombed by the Russian army.

The mosque was said to hold more than 80 people. There were no immediate reports of casualties.

Johnson and Martin discussed the Ukraine crisis and the Northern Ireland Protocol before watching Ireland beat England in the Six Nations at Twickenham.

A Downing Street spokesman said the two leaders discussed their “deep concern over the escalation of hostilities near Kiev” and “condemned the attacks by Russian forces on civilians”.

“The prime minister said that this was a critical moment for Ukraine and for European and international security in general,” the spokesman added.

“They agreed on the vital importance of continued unity in the face of Russian aggression, including through humanitarian aid, defensive military support to the Ukrainian government, and further sanctions against the Putin regime.”

Johnson is said to have told Martin that he hoped the “same spirit of cooperation” that the UK and the EU had shared during the Ukraine crisis could be applied to the protocol discussions.

A spokesman for the Taoiseach’s office said the pair discussed “Russia’s brutal invasion of Ukraine and the profound humanitarian, economic and global security consequences.”

They welcomed “close collaboration” between the EU, the UK and other partners to hold Russia to account and address the humanitarian needs of the Ukrainian people, the spokesman said.

The crisis in Ukraine and the protocol were expected to be high on the agenda when the leaders met this weekend.

The Irish Prime Minister is visiting the UK as part of a program of events to mark St. Patrick’s Day.

Before the bilateral meeting on Saturday, Martin said he was not there to tell the Prime Minister what to do about the refugees.

Asked if he would encourage Johnson and the British government to take in more people fleeing the war in Ukraine, he told reporters at the Irish Embassy: “Well, to be fair, I’m not here to tell Boris Johnson to do.

“I have to acknowledge the leadership of the UK Government in terms of the sanctions it has imposed on Russia.

On Sunday, the Taoiseach will attend London’s St. Patrick’s Day festival and parade, which this year celebrates the “community” and key workers during the Covid-19 pandemic.