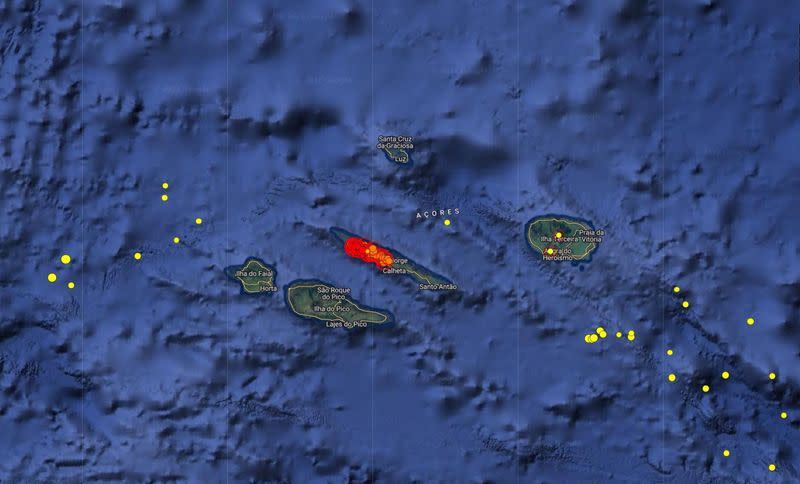 LISBON (Reuters) – Authorities on a volcanic Portuguese island in the mid-Atlantic hit by thousands of small earthquakes in recent days are drawing up plans to evacuate people if the situation worsens.

Some 2,000 earthquakes have been recorded in Sao Jorge, in the Azores archipelago, since Saturday, Luis Silveira, mayor of the Velas municipality, told reporters.

It is feared that the earthquakes, with a magnitude between 1.6 and 3.3, could trigger a stronger tremor or a volcanic eruption, according to the region’s seismovolcanic monitoring center CIVISA.

CIVISA raised the volcanic alert to level 4 out of 5, which means there is a “real possibility of an eruption,” said Clelio Meneses, the regional secretary responsible for the Civil Protection authority. “What we are doing is preparing for the worst case scenario,” Meneses said.

The small earthquakes, which have so far caused no damage, were recorded along the island’s Manadas volcanic fissure, which last erupted in 1808. A major earthquake struck the island in 1980, causing severe damage.

Silveira said those in hospital or nursing homes in Velas were being transferred to Calheta, on the other side of the island. She said civil parishes in Velas were also preparing to move people with reduced mobility.

Plans to evacuate the rest of the population to Calheta or other islands would only be activated if necessary, he said.

Sao Jorge, one of nine islands that make up the Azores, is home to some 8,400 people and is part of the core group of the archipelago, which includes the popular tourist destinations of Faial and Pico, which are also volcanic.

“We recommend that people have a backpack prepared with the minimum, like a change of clothes, medicine and some food,” Silveira said.

He said the army and air force were ready to help and a navy ship was on the way. The Portuguese Red Cross is sending beds to the island.

The sudden increase in seismic activity is reminiscent of earthquakes detected before the eruption of the Cumbre Vieja volcano on the Spanish island of La Palma last year, some 1,400 km (870 miles) southeast of the Azores.