Pompelos Togado: the coincidence that allowed him to return home 116 years later 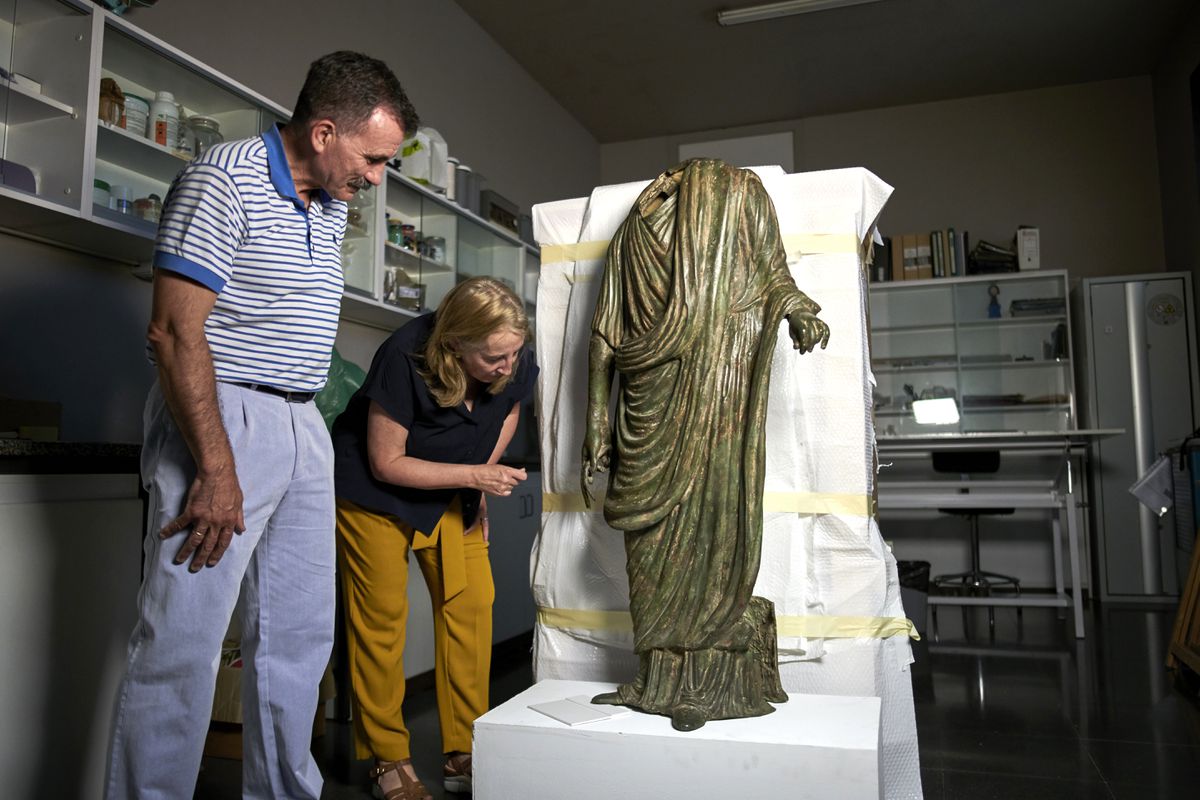 The year was 1895 and while doing some work on Calle de la Navarrería in Pamplona, ​​workers found a Roman bronze statue divided into three large parts. A chance find that the builder José Aramburu y Elizaga, owner of the piece according to the legislation of the time, handed over to the Monuments Commission of the Province of Navarre for study. A few years later, in 1906, he claimed it and it has been missing ever since. In 2015, during a congress in Aalen (Germany), an American researcher identified it during a presentation by the director of the Provincial Archaeological Museum of Alicante, Manuel Olcina Doménech, and assured that it was in the United States. Today, 116 years later, it is exhibited in the Museum of Navarre.

It is not known what happened to Pompelos Togado in all this time, but what stands out is the succession of coincidences that have happened throughout history, which have allowed for his temporary recovery for the next two years, after which he will be with arrived the stream is the owner of the piece. When the builder Aramburu y Elizaga delivered the piece to the Provincial Monuments Commission in 1895, it was restored and a photograph taken. It is the only one documented up to 2015 and, according to Irigaray, trained all generations of Spanish archaeologists. It is not a trivial detail because thanks to the existence of this image it has been rediscovered. When it became known that it was in North America, investigation revealed that it had been auctioned at Christie’s, that it was never sold publicly, and that it was acquired by the current owner shortly thereafter. “How long have you been in America? We don’t know how many hands it’s passed through, just that it’s been in at least two private collections,” explains Susana Irigaray, director of the Museums Service of the Government of Navarra.

Aramburu y Elizaga is believed to have sold it to a French antiquarian because “French antiquarians roamed Spain searching for and buying archaeological material throughout the 19th century”. This is what happened, for example, with the Lady of Elche. There is another detail that supports this hypothesis, and that is that this statue has always been referred to as Roman Gaul from southern France. Its incorrect identification and the fact that it was always in private hands have prevented it from being found to this day. It is known to have been in 1985 in the United States because that was the year millionaire Kruge bought it. It was still there in 1996 because it was part of an exhibition at a private museum. Coincidence reappears: the researcher who created the catalog files for this exhibition was the one who later identified the piece during Olcina’s presentation in Germany.

It was a special moment, remembers Manuel Olcina: “I was shocked because this piece had been missing for more than a hundred years and thanks to the fact that I had taken it out at this congress and reported it lost, this researcher said ‘no, this piece exists’. Olcina underlines the importance of the piece, which is very relevant to Roman art due to its size. He hopes to travel to Navarra to see it and assures that it was “one of those professional moments that will be remembered forever”: “It’s like living in a dark environment and suddenly opening she a window. everything lights up and you can see everything. They say oysters! This piece is not missing, it exists!”

Another milestone happened in 2018, which contributed to the happy ending. Roman sculpture specialists Luis Romero from the University of Navarre (UNAV) and Rubén Montoya from the University of Leicester published an article in English in the journal Archeology Notebooks the UNAV with the conclusions of the new stylistic study of the piece that they had carried out as a result of a second photograph sent to Olcina by the North American researcher. “We don’t know how,” says Irigaray, but “the owner found out that the piece was not from France and could be positively identified as Pompelo’s robe. Through an intermediary, he contacted the Spanish authorities to have it legalized.” He is believed to have been concerned about whether it was a looted piece or a court case. This first contact was key for the museum service to conduct the appropriate negotiations to bring the dress home.

The process wasn’t easy. A pandemic and four years later, it was agreed that the piece would remain in Pamplona for two years, with no financial compensation and with the possibility of conducting studies that would not be invasive, that is, not affecting the integrity of the piece.

The unknowns about the piece

Known as the Togado de Pompelo, dated to the first half of the 2nd century AD C., is a bronze sculpture of 127 centimeters representing a male figure in a toga, details Susana Irigaray, Director of the Museums Service of the Government of Navarre . “It was a prestigious garment, only male Roman citizens could wear it and it showed a person’s social status.” This detail suggests that the statue belonged to someone who was wealthy, but there are other clues to prove this. On the one hand, this bronze was an expensive material. On the other hand, it’s a round statue, which means it also has a back, meaning it wasn’t created for a niche and whoever commissioned it didn’t realize the cost. However, it is not known who she is, as she is missing a bust, as was customary at the time.

The sculpture’s stature raises other clues, says Jesús Sesma, director of the Historical Heritage Service: “It is slightly smaller than natural, which probably represents patrician or a high position of Roman Pompelo in present-day Pamplona because an emperor would never be smaller than in.” be represented life-size”. In addition, the fact that it is constructed of bronze is a distinctive feature, as few have survived the successive foundries used to manufacture weapons and currency. In fact, there are only two left in Spain: the Togado de Pompelo and the Togado de Periate, housed in the Archaeological Museum of Granada and discovered in the 1980s.

Now it’s time to study the piece to know which pieces are original and which aren’t. A process that can help uncover the unknown, e.g. B. What is the object he is holding in his right hand. It appears to be a small detail, but it may shed light on who the man portrayed in the sculpture was. Likewise, historical studies were commissioned with the aim of better understanding the context in which it was created, because “iconography is very well defined in classical sculpture,” says Sesma.

The Navarre Museum has two years to do this, although its aim is for the sculpture to remain at home. There is one very important aspect to consider, Irigaray concludes: “We haven’t heard from her for almost 120 years because she was privately owned and if she goes another 120 could happen because we can’t find her. “