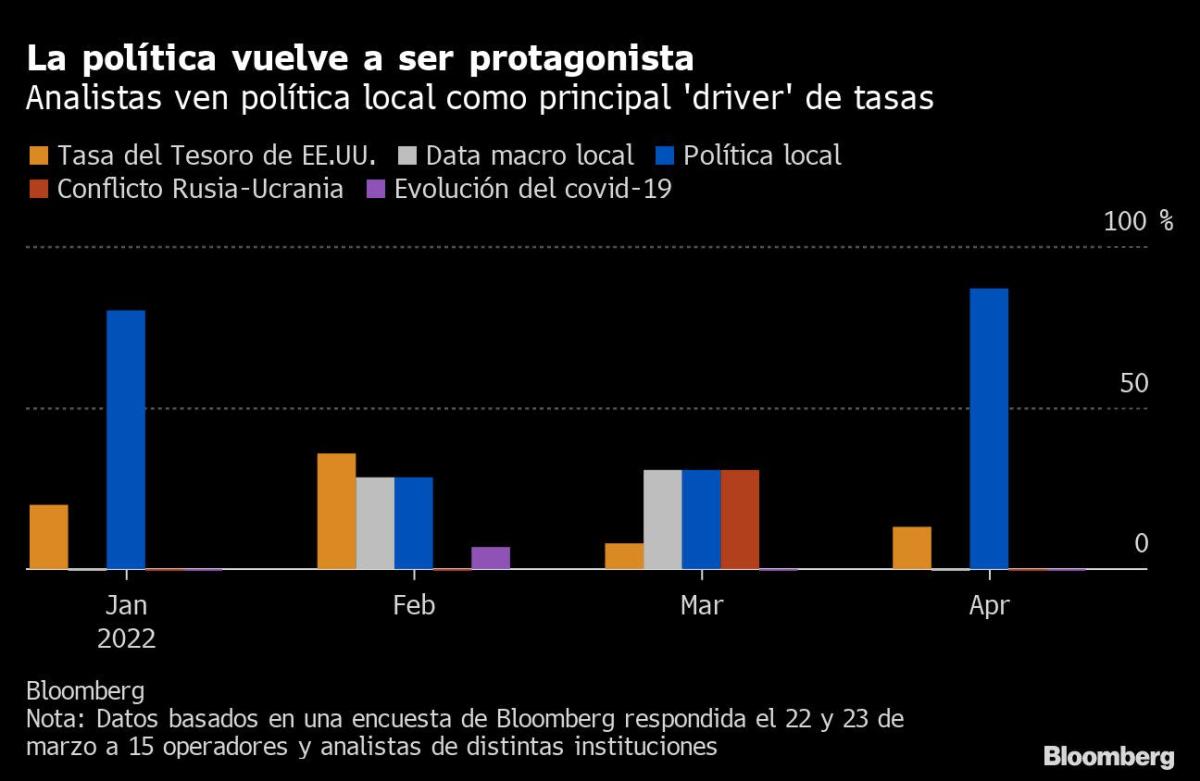 (Bloomberg) — Local political events are back in the market’s eye, depressing expectations for Chilean bonds in April.

Thirteen of 15 traders and analysts surveyed by Bloomberg News expect peso rates to lock in next month and most expect the nominal interest rate curve to steepen as rising political risks threaten the country’s long-term prospects. .

Last week, the Chamber of Deputies had the idea of ​​legislating a fifth pension fund withdrawal bill, which could drain billions of dollars from the largest institutional players in the Chilean financial system. At the same time, members of the Constitutional Convention are debating some controversial proposals, including one that gives indigenous communities the right to veto local projects and another that nationalizes copper mines.

“The long end of the curve still has room to rise because the market has not finished ‘pricing’ country risk considering political changes,” said Mariano Álvarez, manager of fixed income at LarrainVial.

The short part of the curve has risen enough, especially considering that the market has internalized a strong increase in rates this week, Álvarez said. “The curve could steepen a bit, since it is too inverted.”

House-peso swaps price in an increase of more than 225 basis points at Tuesday’s monetary policy meeting, to 7.75%, while traders expect a rise to 7.5%, according to the latest bank survey. central.

In January, policymakers surprised the market with the biggest rate hike since 2001, after inflation consistently beat analysts’ expectations and hit the highest level in more than a decade.

Despite the war in Ukraine dragging on and generating tensions around the world, 87% of traders expect local politics to be the center of attention in April, compared to 31% in March, while 13% The remaining estimates that US Treasury yields will be the main catalyst for Chilean fixed income.

The government of President Gabriel Boric has said that a fifth withdrawal is not on its economic agenda, and no date has yet been set to discuss those projects. Close to $50 billion has flowed out of pension managers in previous withdrawals, putting pressure on stocks and bonds.

Among political factors, the fifth retirement is the main concern, according to 80% of those surveyed, compared to 8% in March. Another 13% believe that the votes in the Constitutional Convention will be more important, and the remaining 7% point to the Boric government program.

“The possibility of new withdrawals from pension funds is low, but it is not zero now that parliamentarians have raised the issue on the table,” said Ramón Domínguez, portfolio manager at MBI Inversiones. “The market is trying to ‘price’ this new factor, which today appears as the main uncertainty.”