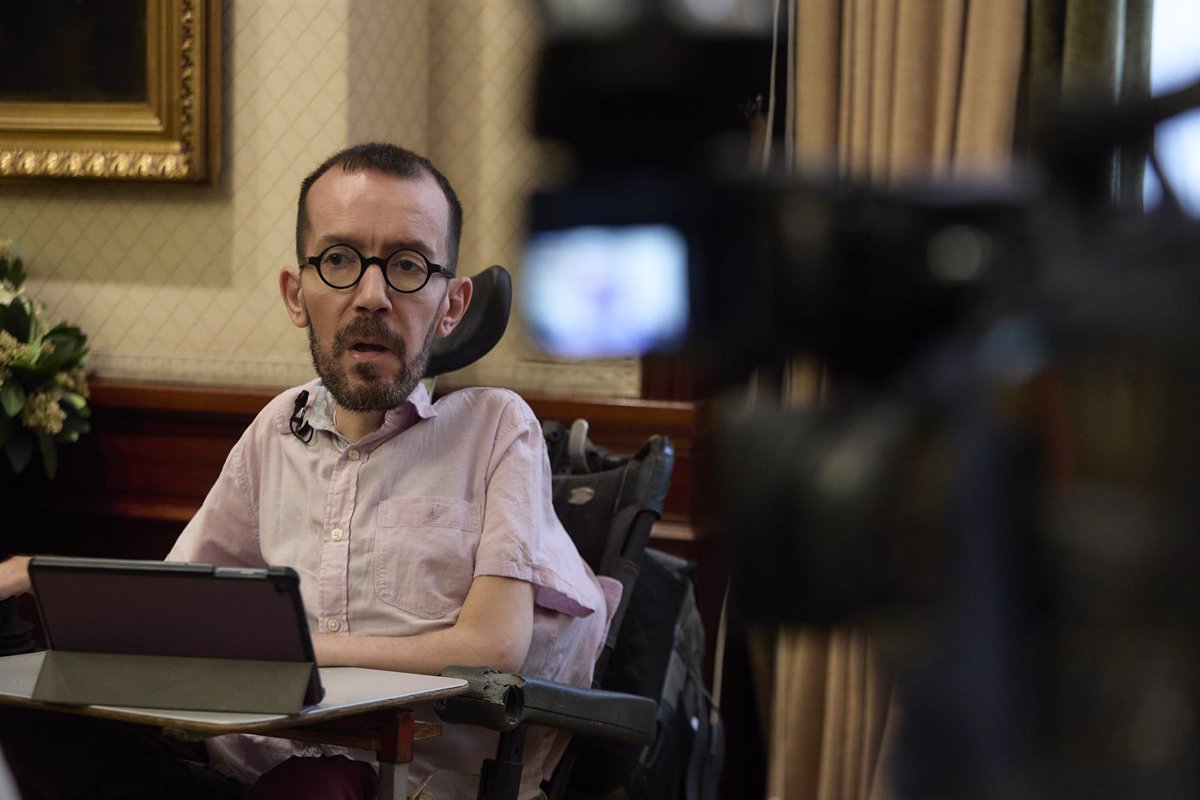 United We Can spokesman in Congress Pablo Echenique has defended the need to raise the spending ceiling to have “expansionary” general budgets for 2023. He has also called enacting tax reform in them crucial, as it depends on “everything else” like increasing social spending.

He has also called for the new housing law to be approved and the “gag law” to be repealed before budget negotiations begin, warning the PSOE that agreeing on “right-wing measures” would be a “programmatic and ideological error”. with the PP, as in the case of increased military spending.

During an interview with Europa Press, Echenique pointed out that the socialist wing has not yet contacted his formation on the spending cap, but the confederate faction is aware that it must rise up in turn to encourage public investment amid another economic crisis increase , as a result of the war in Ukraine.

And it is that, as he has argued, Europe and Spain understood during the pandemic that “the public sector should be there” to protect citizens and now the context is “identical” and public action should not to be “weakened” but to put in “more investments” that are quite “profitable” if revenues are increased with this progressive tax reform.

In fact, Spain has been found to be eight points below the European average of the survey, resulting in a drop in public service resources of between 80,000 and 90,000 million. That’s why he calls for overcoming this “very perverse” economic norm, which posits less public investment to balance the accounts when there’s plenty of room to increase spending while reducing debt as large corporations and incomes pay more taxes.

IT IS A FAULT TO “AGREE LEGAL ACTION” WITH THE PP.

He has also argued that the solution to this crisis “is not to increase military spending” and they will try to convince the PSOE that “it’s not a sensible action” because Spain “is not at war “, but rather the economy is suffering from the effects of the armed conflict in Ukraine.

When asked if they could ask for more social spending in exchange for the defense budget increase, the spokesman for the federal faction reasoned that “it’s true that mathematically both things can be increased, it’s obvious”, but at the same time “it is It’s also obvious that if you don’t increase military spending, you can keep increasing social spending.

As Sánchez himself already shared in the debate on the nation, it would be a mistake to “take right-wing measures by agreeing them with the PP”, but it would also be a double “mistake” to give him a “state party charter”. , when for three years he has been blocking the renewal of the General Council of the Judiciary and legitimizing a formation that “buys a lot of ideas from the extreme right.” “To maintain the fiction that Feijóo is moderate is negative because it is a lie”, has Echenique launched.

UNLOCK APARTMENTS AND THE GAG LAW

On the other hand, he has indicated that “nobody understands” that the repeal of the “gag law” and the future housing regulation are yet to be approved, which should be released “immediately” before households.

Regarding the first case, he pointed out that they were not far from the final agreement to end this “notorious” and “repressive” law endorsed by the PP, but that it had been longer since the motion of no-confidence against former President Mariano Rajoy There are a few “stumbling blocks” that need to be resolved.

Among the elements requested by the confederate space and other parliamentary partners, he has cited the need to review the sanction for disrespect towards police officers as it is now “ambiguous” and “can be used to impose fines if someone gives a bad look to a police officer”. or the legal responsibility of the organizers of demonstrations when disputes arise.

On housing, Echenique has stressed that they seek to reduce the “vacatio legis” in the application of rent regulation, that Sareb cedes its apartments to the public administration’s social park and permanently prohibits the eviction of vulnerable people. No housing alternative. “These are sensible things (…) we don’t ask about the moon,” admonished Echenique.

Likewise, it has wormed out that in the budget negotiations they may propose raising the corporate tax for large supermarkets by ten points and using this additional tax to fund a check to make shopping easier for families or to pay VAT at private universities at a profit put an end to the liberation they now enjoy.

Mainly because these are “good ideas” and were therefore included in the proposed resolutions in the context of the State of the Union debate, which the PSOE did not support, although the fundamental element is to propose a “bold” Tax reform and an increase in the budget for social items. “Everything else can be discussed,” he slipped.

He has also described as “very serious” the fines imposed by the National Commission for Markets and Competition (CNMC) on six of Spain’s main construction companies for failing to accept thousands of public tenders for the construction and civil engineering works of Spain over 25 years infrastructures had changed.

In this sense, he has denounced that these companies have been trying to get “more money” from the administration, which stops going into health and education, for which he supports the ban on contracts with these companies, which the regulator already has collects.

However, he has stressed that while this possibility exists, it is an extended process, although he defends that speeding up these exclusions for public sector contracts is “not a bad idea”. For this reason, it opens up the possibility of formulating some kind of parliamentary initiative in this regard.

In return, he has asked the PSOE to discuss more within the coalition about the preliminary draft of the new official secrets law. “I know it’s being talked about at government level, although I also know there should be more talking. I think that makes it clear what’s happening,” he said.

In doing so, he has urged to emulate the most modern countries on the matter, stating that his formation rejects the model that the documents are reserved matters “by default” and will be released when “the government says so”. In his view, it should be “the other way around”: “The majority should be public by default and classified by an express act of government.”

He also defended that the period of automatic disclosure of this information “needs to be shortened”, since periods of “four or five decades” cannot be considered, but rather periods of between 20 or 15 years, which is “reasonable”. deadline.

“I believe that our country is of legal age to know what has or has not been done by government agencies. And when documents are released, the security of the agents is guaranteed, the operations are in progress, which does not have to be known in order not to be able to endanger the state forces and security”, he added to the sentence that the regulation of official secrets ” done well” and not with a “Franco law as we have it now”.

Previous articleFrom this Monday there is the Young Culture Bonus: How to apply for it and what for
Next article‘Génova’ denounces Sánchez’s “contempt” for the presidents of the PP for quoting Moreno, Mañueco and Rueda “all at once”.