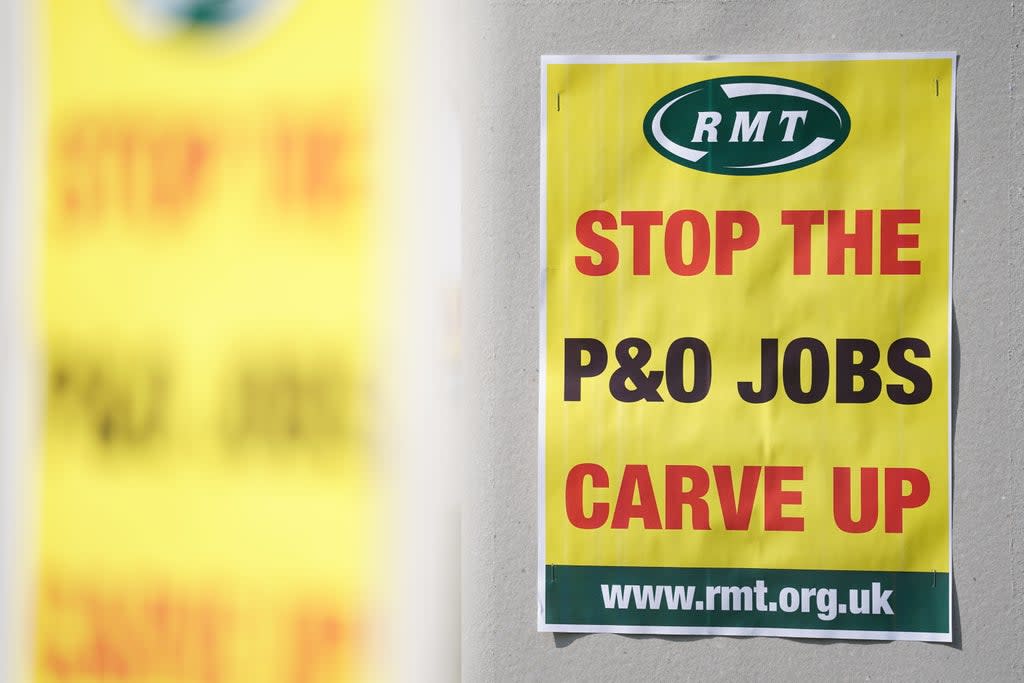 P&O Ferries has announced that it is offering more than £36 million in compensation to redundant staff, with 40 employees awaiting payments of more than £100,000.

It comes after nearly 800 workers were sacked without notice last week, sparking a backlash from across the political spectrum.

The company said the payments would be linked to the period of service and in some cases would exceed £170,000.

It comes as a spokesman for Business Secretary Kwasi Kwarteng confirmed the government had received a letter from P&O Ferries in response to its questions about the shock move before a 5pm deadline on Tuesday.

Employees are also supported in finding a new job at sea or on land.

The ferry giant said 575 of the 786 affected seafarers are in talks to move forward with compensation offers.

A P&O Ferries spokesperson said: “This has been an incredibly difficult decision for the company: make this decision or face company management.

“By making this difficult decision, we ensure the future viability of P&O Ferries, avoid large-scale and prolonged disruptions and secure Britain’s ability to trade.”

The company said that, subject to the settlement agreement, it would pay 2.5 weeks of uncapped wages for each year employed, instead of the statutory or 1.5 weeks.

P&O Ferries said the deal is believed to be the largest compensation package in the British shipping sector.

But Mick Lynch, general secretary of the Rail, Maritime and Transport (RMT) union, said “payment in lieu of notice is not compensation”.

“It’s just a payment that staff are contractually entitled to as no notice was given,” he said.

“The way the package has been structured is pure blackmail and threats: that if staff do not sign up and hand over their jobs and their legal right to take the company to an employment court, they will receive a fraction of the allocated amount. they.

“P&O’s actions demonstrate the weakness of UK employment laws and protections. P&O has flagrantly broken the law and abandoned any standard of decency in the workplace.

“They have taken our members’ jobs, careers and pensions and thrown them on the dole with the threat that if they don’t sign up and give up their rights they will lose many thousands of pounds in payments.

“This is totally unacceptable and RMT will continue to campaign for our members to be reinstated into P&O and for better labor laws to protect all British workers.”

Mr. Hebblethwaite has been invited to attend a trial session held jointly by the Commons Business, Energy and Industrial Strategy (BEIS) and Transport Committees on Thursday 24 March, which will examine the options available for the Government and workers who have lost their jobs. .

In a statement, committee chairs Darren Jones and Huw Merriman said: “At P&O Ferries, our members want to know why this action was taken and how it can be justified.

“We want the Government and its agencies to confirm that our laws are not being violated and that safety is not compromised on our ships.

“This shocking story has raised questions about UK employment law, safety practices, the support of this business during a pandemic and the remedy available.

“We intend to hear from key players about what they are going to do so that these workers are not left in the lurch.”

Let’s be clear, this statement is a confirmation that P&O Ferries believes that with enough money it has no need to follow the laws of this country or be hindered by ethical business standards despite the ostentatious commitments of its parent company in Dubai.

Last week, Kwarteng wrote to Hebblethwaite to say that P&O Ferries had “lost public confidence” and “brought the company a bad name”.

The letter demanded answers to a series of questions about what happened, and a response was requested no later than 5 pm on March 22.

A BEIS spokesman said on Tuesday: “We have received a response to the Business Secretary’s letter to P&O and are reviewing his explanations.

“We will continue to work at full speed with the Bankruptcy Service to consider whether legal action is required and will provide an update as soon as possible.

“Given recent reports of staff receiving wages below the national minimum wage, the Business Secretary has also asked the Employment Agency Standards Inspectorate to investigate the terms of the agency workers’ contracts.”

The Nautilus union said in a statement: “It has taken five days for the company to come to light with an explanation, of some kind, not an explanation of its outrageous and illegal actions, but an admission of guilt that it intends to make to one side with money.

“P&O Ferries’ shameless actions now extend to trying to buy their way out of a legal situation exposed by the unions, the obligation to inform the Secretary of State and to consult with recognized unions.

“P&O Ferries claims to be offering the ‘largest compensation package in British shipping’: a company in such dire financial circumstances that it is willing to spend £36.6m on a bogus redundancy.

“Let us be clear, this statement is confirmation that P&O Ferries believes that with enough money it has no need to follow the laws of this country or be impeded by ethical business standards despite the dazzling commitments of its parent company in Dubai.

“Instead, he is intent on intimidating our maritime professionals into signing settlement agreements to buy their silence.

“P&O Ferries management has put intense pressure on Nautilus members to accept these terms of dismissal while threatening them with withdrawal of the offer if they speak to the press or speak out against the company.

“We are not surprised that many of our members vote with their feet and leave.

“We seriously doubt many will return because of reduced terms and conditions and the promise of a bonus in 12 months from a Maltese team that didn’t exist five weeks ago.

“This company has been poorly managed, there is no doubt about that. Questions must be asked about the directors who have brought to ruin a once-proud company with nearly two centuries of history.”

Nautilus General Secretary Mark Dickinson said: “We demand that P&O Ferries engage with recognized unions, reinstate all staff who were laid off and discuss our serious safety concerns about how the company now plans to operate the ships.

“Only then can P&O Ferries live up to its heritage, contribute to the achievement of the Government’s Maritime 2050 strategy and recover from the damage it has caused, not only to the nation’s reputation, but also to its own reputation and to shipping. maritime that once stood proud. fire.”

“If P&O is allowed to get away with a slap on the wrist, it will be a green light for employers across the country to treat staff as disposable labor.

“The government needs to hit the company where it really hurts. That means immediately suspending all P&O licenses and canceling their lucrative free port contracts until all workers have been reinstated.

“The chancellor must use his statement tomorrow to show that he is willing to take on bad bosses. Not a dime of taxpayer money should be given to companies that trample on workers’ rights.”