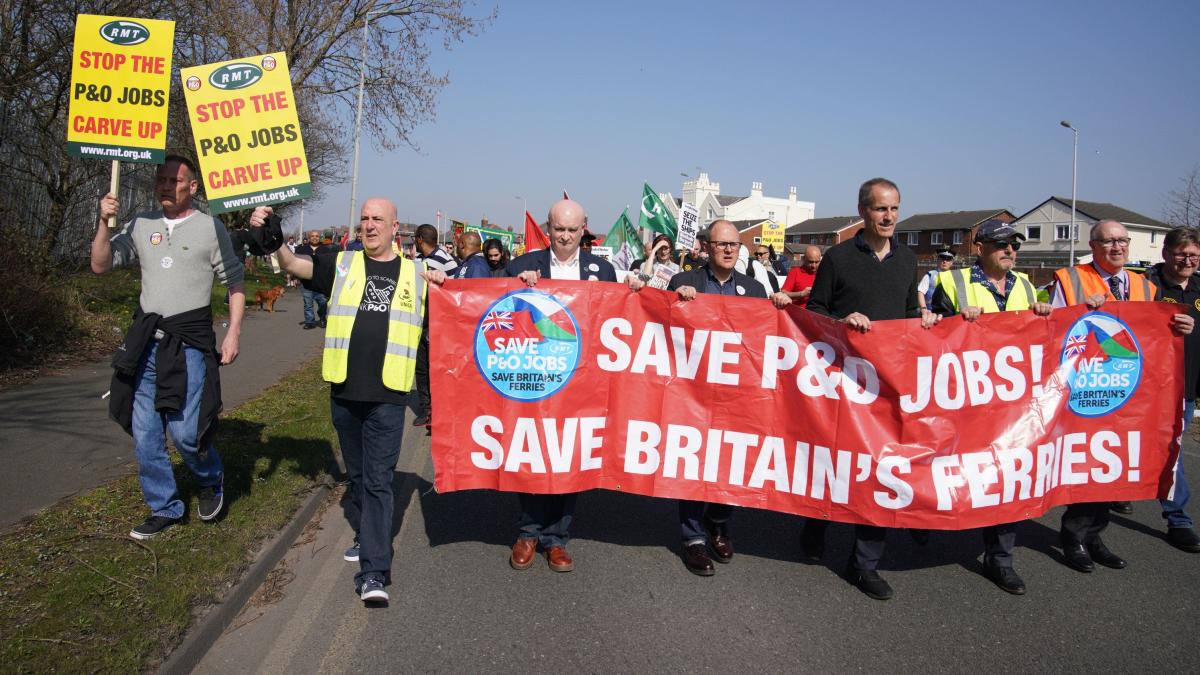 Bosses of two of P&O Ferries’ rivals are due to meet with government officials to discuss the consequences of the company’s widely criticized move to lay off 800 employees.

The Department for Transport (DfT) invited DFDS and Stena Lines for talks on Monday, amid concerns about chaos at ports during the Easter holidays.

The department confirmed that the meeting is taking place, but declined to comment on the topics of discussion.

But a spokesman said: “Ministers are working to understand how we can ensure the continuation of services in collaboration with other operators, including DFDS and Stena.”

It is understood that Stena’s chief operating officer, head of fleet management and government affairs, Ian Hampton, will attend as will union representatives.

The meeting comes after the Pennsylvania News Agency learned that P&O Ferries conducted a study last year into options for sustaining the company that estimated it would cost £309m to keep the business going while consulting with staff. about job losses.

He decided against an all-staff consultation on his plans to cut almost 800 jobs, a move that has drawn a huge backlash from unions and politicians.

A company source said the study estimated it would cost £309m to keep the business going for a consultation period of at least three months, adding there was no guarantee of recovery.

Months of consultations would have undermined the business, caused disruptions that would have driven customers to the competition, dealing a “fatal blow” to P&O, the source told PA.

P&O believes it has safeguarded the long-term future of the company and the livelihood of 2,200 employees.

A P&O spokesperson said: “Over 90% of the affected seafarers are in talks to move forward with compensation offers.

“We are sorry to the affected people and their families for the impact it has had on them. They lost their jobs and there is anger and shock, which we fully understand.

“We needed a fundamental change to make the business viable. This was an incredibly difficult decision that we struggled with, but once we knew it was the only way to save the business, we had to act.

“All other routes caused the loss of 3,000 jobs and the closure of P&O Ferries.

“By making this difficult decision, we ensure the future viability of P&O Ferries and secure Britain’s ability to trade.

“We are committed to ensuring continued and ongoing support for all affected current and former employees.”

The company said the settlement with its workers is believed to be the largest compensation package in the British shipping sector.

Protests were held in Liverpool, Hull and Dover on Saturday with more planned in the coming days.

The Rail, Maritime and Transport and Nautilus International unions are urging the company to reverse the layoffs and the government to take action against P&O.

A ship operated by the ferry company was detained for being “unseaworthy” on Friday.

The European Causeway vessel was held in the port of Larne in Northern Ireland due to “failures in crew familiarisation, vessel documentation and crew training”, the Maritime and Coastguard Agency (MCA) said.

Hebblethwaite admitted to MPs that the company broke the law by not consulting on the redundancies.

Mick Lynch, general secretary of the Rail, Maritime and Transport union, said: “The campaign to get workers back on the ships, to operate these crucial ferry links safely, continues and the company must face the hard facts and take responsibility. The responsability. for their grotesque actions”.