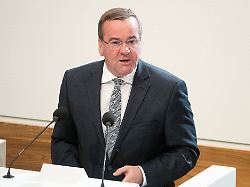 As of Tuesday, more than 11,500 Ukrainian refugees have registered in Lower Saxony. On Wednesday, the federal and state governments will discuss the effects of the war in Ukraine. The Minister of the Interior of Lower Saxony speaks of a completely new security situation.

Hannover (dpa / lni) – In view of the war in Ukraine, Lower Saxony’s Interior Minister Boris Pistorius insists on increasing civil and disaster protection in Europe. The EU is facing a completely new security situation. The war not only had consequences for foreign policy and foreign defense, Pistorius said in Hannover. “Therefore, in addition to military defense, we must significantly strengthen our civil and disaster protection.” Also in the area of ​​cyber security, improvement is needed. This is best done together.

The federal and state governments are discussing the effects of the war in Ukraine at a special conference of interior ministers in Brussels starting Wednesday afternoon. After the conclusion of talks with his counterparts and Federal Interior Minister Nancy Faeser (SPD), Pistorius will hold further talks with high-ranking EU representatives on Thursday and Friday, according to the ministry.

Regarding the war, Pistorius emphasized: “We all have a duty to help the people who were expelled from Ukraine by Putin’s war of aggression as best and as quickly as possible. Lower Saxony, Germany and the European Union have done great efforts to do so.” In the next step, the refugees must be distributed in solidarity, in particular to relieve the countries of Eastern Europe.

In Lower Saxony, the state reception authority has already registered more than 11,500 refugees from Ukraine. Prime Minister Stephan Weil (SPD) announced this in the state parliament on Tuesday.