Photography as an illusion 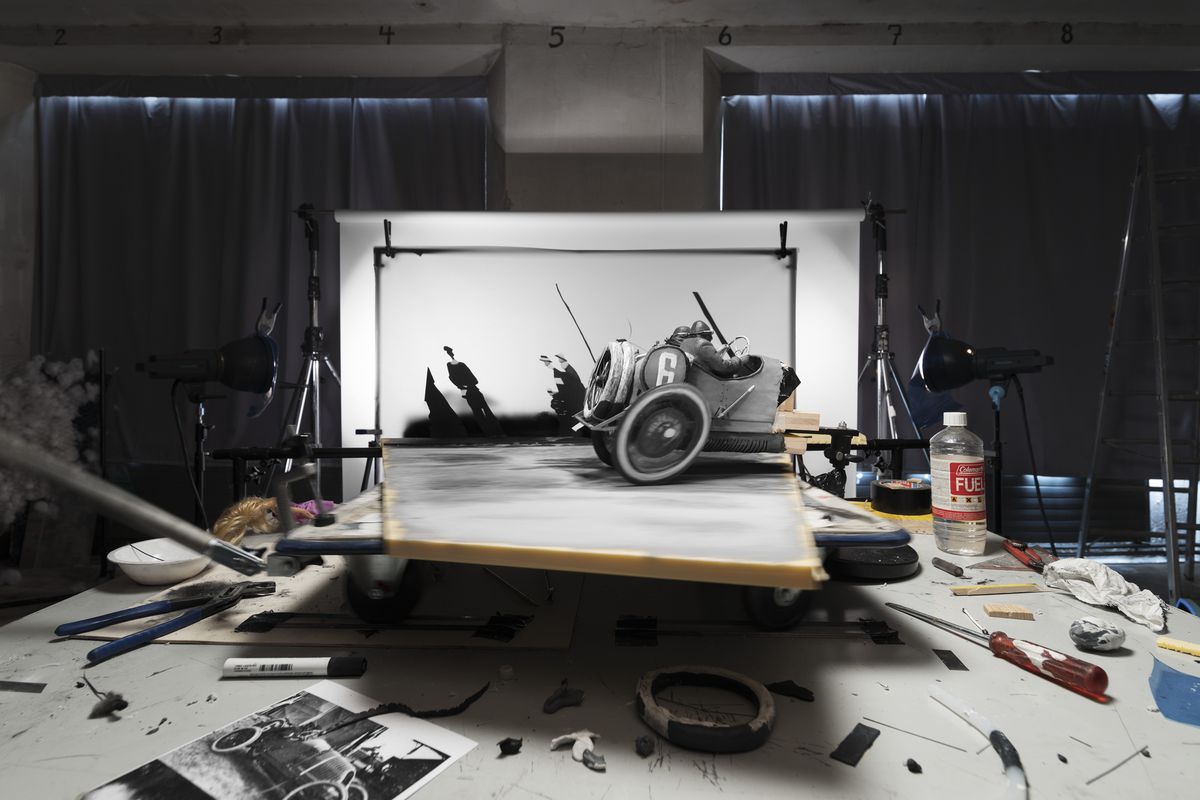 That photography is a technology historically linked to truth is a fact. But the truth is, his relationship with that certainty was short-lived; the time it took its pioneers to adopt the medium as a form of artistic expression. The camera, far from confining the photographer to the service of truth, has proved to be a good tool to transcend reality. Something they soon understood Jojakim Cortis and Adrian Sonderegger who, in their study and initially through the deconstruction of some of the most famous images in the history of the photographic medium, deal with the nature and meaning of photography; in her ability to simultaneously fascinate and unsettle, to show as much as she conceals, to entertain and at the same time excite her audience.

By building a model of one of the Twin Towers, enveloped in a dense tower of smoke, the Swiss artist duo initially succeed in kidnapping the viewer to the scene of the barbaric attack of September 11th. However, this visual illusion is broken when these precise models are photographed along with the various tools used by photographers to reconstruct the scene. The play between reality and fiction, between past and present, pervades the still lifes that make them up symbols, the best-known of the photo series signed by Cortis & Sonderegger, in which they take up both legendary and snapshots Death of a militiaman, manufactured by Robert Capa during the Civil War. A picture that is as famous as it is controversial, and its supposed staging and even its authorship are being discussed. The series also includes the assembly of View from a window in Le Grasby Joseph Nicéphore Niépce, the oldest surviving photograph, and that of tiananmen square, by Stuart Franklin, and that by Behind St. Lazare train station, by Henri Cartier Bresson. The reconstruction of the image, taken by an unknown tourist in Indonesia in 2004, takes us back to the moment before a tsunami turned paradise into hell, and we also find the reproduction of Buzz Aldrin’s footprint, which he photographed himself when he went on the first time the moon

Each of these iconic images helped change the way we saw the world at the time and is part of the collective unconscious. A) Yes, symbols emphasizes the power inherent in photography through the interaction between what we see and the memory of the original photograph. But at the same time it reminds us that photography is not an objective description of the event it represents, but on the contrary is still an illusion.

A small part of this well-known series can be seen in the programming of the latest edition of getxophoto, whose celebration has been brought forward to June this year. under the motto Introduce, and curated by Jon Uriarte, it presents more than twenty exhibitions. Examples that invite us to “develop a critical imagination that allows us to distinguish between what is happening as we understand it and the projection we make of events,” as opposed to “the catastrophic ones or utopian prognoses that surround us”, as it is expressed by the commissioner. “Images play a fundamental role in this task as they are part of the knowledge and practices capable of creating improbable connections through the imagination.”

British conceptual artist John Hilliard is participating in the festival with a single image pinned to a wall in an abandoned house in Algorta’s Old Port. belongs to the series off-screen and It was taken during a meeting where a group of people were gathered to watch a slide show. The viewer will be surprised by the prominence occupied by a blank canvas in the center of the picture, supplanting the assistants (supposed protagonists of the images projected onto it) as secondary elements. In this way, Hilliard questions the objectivity of the photograph, always dependent on the photographer’s decisions. Although the series originated in the late 1990s, it is still relevant in an era marked by the dominance of screens and the algorithms that determine the images we consume.

Reinterpret the natural world through a machine

First the pictures that make up neural zoo, the series presented by the Lisbon-based Argentine artist Sofía Crespo seem to represent a suggestive and exotic collection of animals and plants; Parrots with brightly colored feathers, coiled sea anemones or strange chrome beetles. But the longer the viewer pauses in his analysis, the more doubts arise, as the depictions become as familiar as they are unfamiliar. The real seems to merge with the imaginary in these photographs, which the author calls “speculative images”. They have been created with the most advanced means involving artificial intelligence for image generation. To do this, Crespo first creates a dataset from images of the natural world and uses neural networks to interpret them. The result is an image in which nature has been reorganized so that while it speaks to us about the natural world, it distances itself from it. It’s an exploration of how creativity works; the recombination of the known to give way to new forms and points to the possibilities that exist beyond the visible. In this process, Crespo draws similarities between the techniques used by AI and the way humans express themselves creatively and perceive the world, while at the same time questioning the potential of machines in artistic practice. The author asks, can art be reduced to the reassignment of data recorded through sensory processes?

- Advertisement -
Share
Facebook
Twitter
Pinterest
WhatsApp
Previous articleThe Mexican lawyer Google has to pay $250 million to
Next articleThey’re not your kids, they’re not your boss; it is the system. This is how parental exhaustion or “burnout” occurs.