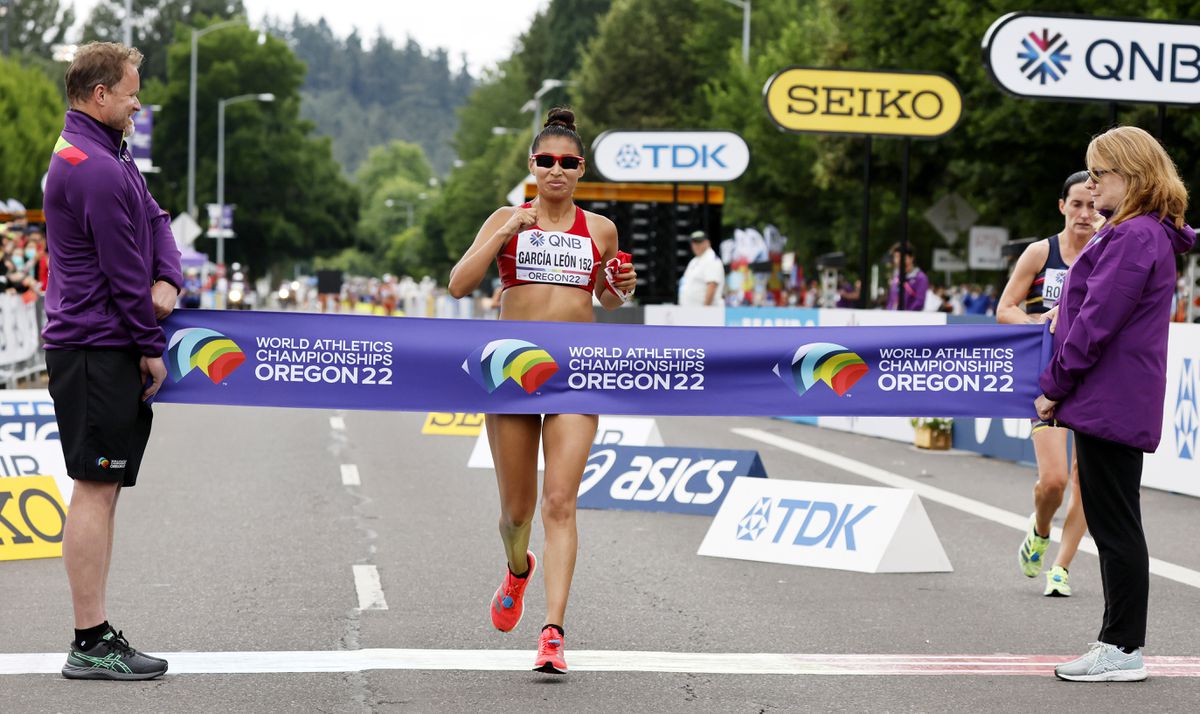 The drone with the cameras recording the test buzzes like a fly in the sky while Peruvian Kimberly García (Huancayo, 28) in Oregon says she is leading the march. A week after her victory in the 20-kilometer test, the young woman wins gold again. And the milestones are piling up. These are the first two medals in the history of the World Athletics Championships for Peru. She is the first to repeat the Oregon World Cup victory to date. And the first Latin American to win two medals at the same World Cup.

Born at more than 3,200 meters above sea level, where oxygen is scarcer and the body gets used to doing more with less, García says that these days she has paid particular attention to rest and nutrition to recover from the efforts of her first race to recover. At no point does the South American feel tired over the 35 kilometers, who gets away very early with the Pole Katarzyna Zdziebło and the Chinese Qieyang Shiejie, the same two competitors who accompanied her on the first podium in Eugene.

It quickly becomes clear that the Asian woman’s attempt to follow them is based more on will than on compulsion. And from kilometer five, García and Zdziebło increase their lead on the one-kilometer circuit next to the American Football Stadium in Autzen, on which they drive lap after lap. Meanwhile, from behind, Spaniards Raquel González and Laura García-Caro march close to the medals, patiently waiting for the tail of one in front to touch metal.

“Let’s go Kimy!” shout several Peruvian fans on the side of the flag, along with the coaches who tirelessly cheer on their athletes as they pass by, with a closeness unmatched at any other event.

The medals seem to be a matter for two. But Kimberly García decides not to wait until the end and goes alone halfway through the test. The previously donned sunglasses now cover her eyes and while others rictus twist with pain and fatigue and some bend under the weight of the kilometers, she walks listlessly, much oxygen, others lacking, without expressing any emotion or suffering. “The strategy was to drive up to 20 kilometers and improve,” he will explain at the end.

That progress, with a second half faster than the first, is unmatched by the rivals, although the Pole sometimes comes close and the distance expands and contracts like an accordion. Eventually they give up and Peru, hand in hand with their best walker, take their second gold, which puts the country fifth in the medal table ahead of countries with such a sporting tradition as Kenya.

At the end, García states that the result exceeded the expectations he came to Oregon with. “We didn’t expect to win gold medals, we expected to be in a good place. I have prepared a lot, I have worked very hard to achieve it, it has been my dream since I was very little and to achieve it makes me very proud of myself. I hope that all Peruvians will be very proud that Peru will be at the World Cup.”

The Spaniards Raquel González and Laura García Caro set their personal bests in fifth and sixth place on a day with very good weather conditions of 15 degrees at the start.

Previous articleSamsung: If the rumor is true, an advantage of the Galaxy Z Flip 4 is gone
Next article“IHK Germany”: DIHK warns against phishing attacks