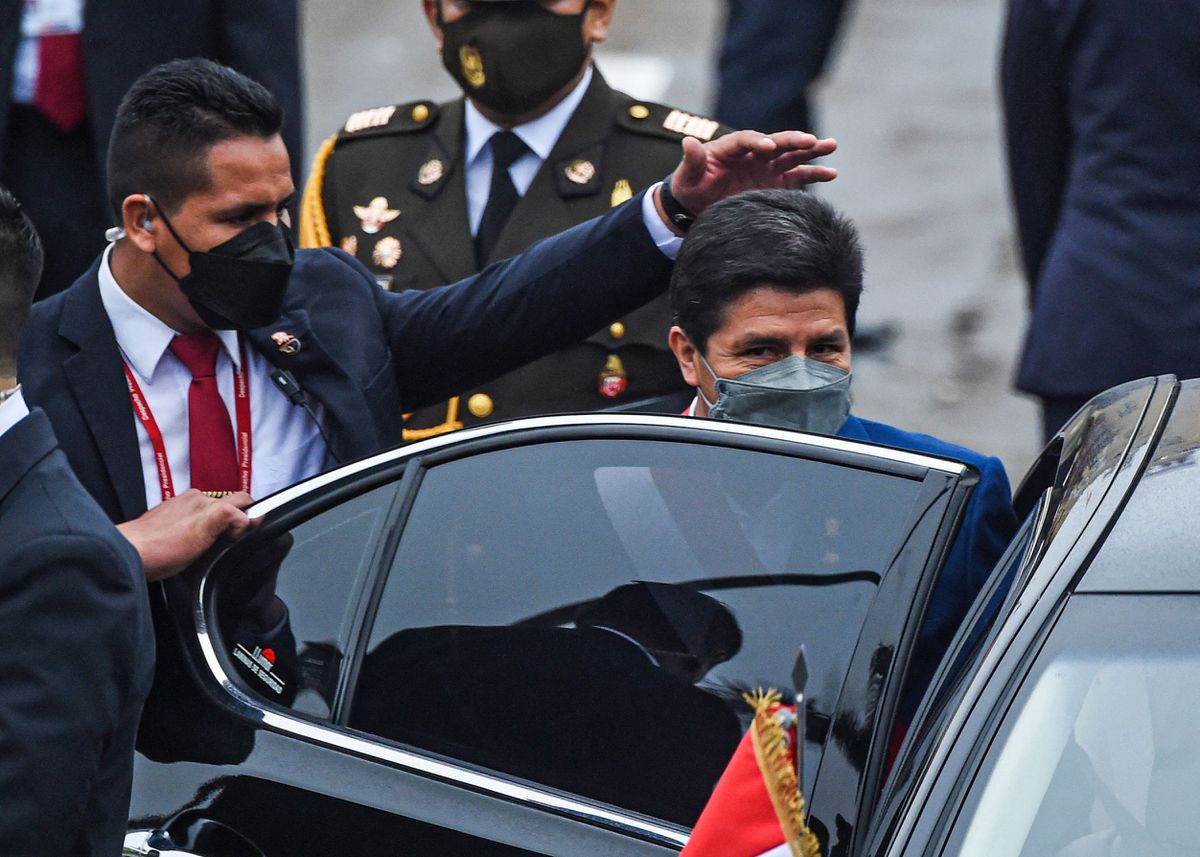 Rural teacher and former union leader, who became President of Peru a year ago, Pedro Castillo, and officials began this Thursday with a verbal rebuke from the Archbishop of Lima. Monsignor Carlos Castillo, during the Mass that opened the day’s events, lamented the instability that the Andean country is experiencing due to the political class. “Today a huge political crisis with a viral background of corruption and cover-ups serving private interests. Indifference, individualism, group interests, mafia,” he started from the cathedral of the Peruvian capital in front of congressmen from different benches.

The direct allusion to the country’s disintegration was not sustained later in Congress, however, when the head of state presented the tally of his first year at the helm. His list of achievements hid the evidence of crimes committed by former officers and their families, and self-criticism was almost nil. “I have to admit we made mistakes on some designations and gave credit to those who exploited it and made fun of it. Nothing more contrary to and distant from my values ​​are the acts of corruption and wrongdoing as recorded in history when the treasury and public goods were embezzled,” the President said at the beginning of his first message to the nation for the National Holiday. .

He had mentioned both of these same mistakes back in January in the first in-depth interview he gave to a weekly newspaper in Lima, when prosecutors were only investigating him on charges of collusion and interference with military promotions. It came two months after prosecutors found $20,000 in cash in the office of then-Secretary General of the Presidency Bruno Pacheco. The former officer went into hiding and was on the run for more than three months until last Saturday when he turned himself in to the prosecutor’s and police team investigating the corruption of Castillo and his close circle.

According to Pacheco’s initial interrogations, the money was part of bribes they charged police officers in exchange for promotions. The head of state faces three more investigations: for his alleged intervention to get state-owned Petro Perú to select a company in its $74 million biodiesel purchase, and for criminal association, influence and collusion in the bid for a millionaire public works in the Amazon: the Case called Puente Tarata.

Included in this tax folder are two of Castillo’s nephews and former Minister of Transport Juan Silva. One of the nephews is still at large and Silva’s lawyer announced this week that his client will surrender in the coming days. In addition, new Attorney General Patricia Benavides launched the fourth investigation into a cover-up, as former Interior Minister Mariano Gonzales was impeached for deploying a special intelligence team to investigate the President and his circle. .

According to a July poll by Ipsos Peru, 74% of Peruvians oppose the Castillo government and 79% oppose Congress, which has twice attempted to remove the president by counting the “vacancy for permanent moral incompetence,” which requires 87 votes and a diffuse cause, since there is no precise definition of moral disability. The confrontation that the parliamentary opposition has sought in the legislature since the first day Castillo took office, and the continued endorsement of norms against social rights and in favor of private interests related to corruption, have led citizens to reject both branches of the state.

64% – according to the same survey – who disapprove of the leadership of Congress believe that they are only aware of “their personal interests” and that corrupt people exist. In addition, 65% agree that parliamentary elections should be brought forward. During the Mass, the Archbishop of Lima mentioned a critical moment in Peruvian history when, in 1822, the liberator José de San Martín saw that Peru’s independence was in jeopardy and a war was being protracted. He then sought out Simón Bolívar to speak “in a gesture of distancing”, he left Peru leaving Bolívar and a constituent congress.

The allusion to this episode echoed the 120 institutions that formed a coalition this Wednesday to demand new elections and a democratic and constitutional solution to the institutional crisis. After the President’s message, political scientist Paulo Vilca told EL PAÍS: “The most remarkable thing is that neither Castillo nor Congress are aware of the rejection they arouse in the majority. The speech and actions of Congressmen during the session are the best example.” The political scientist was referring to the parliamentarians who turned their backs on the President while he read his balance sheet, and others who preferred to leave the room because they felt offended by some of the former teachers’ leader.

Castillo reiterated that he began his tenure “surrounded by unfounded negative omens.” “They started on the same day of our election victory and it is necessary to specify, they came from the most conservative sectors that never wanted change or social justice.” His campaign opponents called him a chavista and a communist, and so far those who asking for the vacancy of the president, indicating that they want to rid the country of “communism”. The head of state then said his government is moving forward despite the displeasure of “those who think they own the country”.

“It didn’t even amount to a confrontational speech with his opponents, Castillo is so weak that he couldn’t even finish his speech,” added Vilca. As the president finished his message to the nation invoking the union and urging Congress to process bills being tabled by the executive, opposition lawmakers shouted, “Corrupt, resign, get out!” at the looming investigation he said he submits to justice, “but not to media justice.” And he added: “The media, determined to destabilize the government, only spread lies and false news about Pedro Castillo, who is accused of corruption without evidence, they will get tired of looking for evidence because they The former rural teacher has maintained a strained relationship with most of the Lima press since the second-round campaign in 2021.

Castillo first stressed that the economy had made significant progress during his tenure, despite inflation affecting “emerging markets”. “Very few know, but so far we have grown by 3.5% in 2022 despite the pandemic and are therefore above the average for the region. Similarly, we also beat the forecast of 2.5% economic growth for this year. It’s not communicated,” he complained. He also stressed that formal private sector jobs are increasing, with May reporting 8.9% yoy growth in this indicator. He also presented as an achievement the collection of 5,400 million soles ($1,376 million) in corporate tax debts that previous governments had failed to collect. Peru’s economy has plummeted 11% in 2020 due to the pandemic, and the percentage of people living in poverty increased by 10%, reaching 30% of the population.

The president also said Thursday that a state registry records 3,530 common pots and 217,000 people eating them, for which the Commerce Department has allocated a $25 million budget this year. However, this amount is only used to eventually feed some of these pots, and others have never received supplies from the state and rely on donations from market stalls or citizen charity. For example, the common pot Mujeres Unidas in the Carabayllo district of Lima Norte is organizing a fundraiser this Saturday because a few weeks ago lunch consisted only of legumes and rice, without protein, just like in 2020. , at the worst moment of the economic crisis.

This year, the government approved a one-time additional subsidy for beneficiaries of social programs amid protests over rising fuel and food prices. which reached 1.3 million people; Castillo added that the state will pay a “food assistance bonus” to six million people in the coming months.

- Advertisement -
Share
Facebook
Twitter
Pinterest
WhatsApp
Previous articleAfter a sharp rise: experts see an easing in construction interest rates
Next articleMore than 700 people in situations of human trafficking and exploitation have been assisted by the Red Cross so far this year