Peaceful life in the attacked country 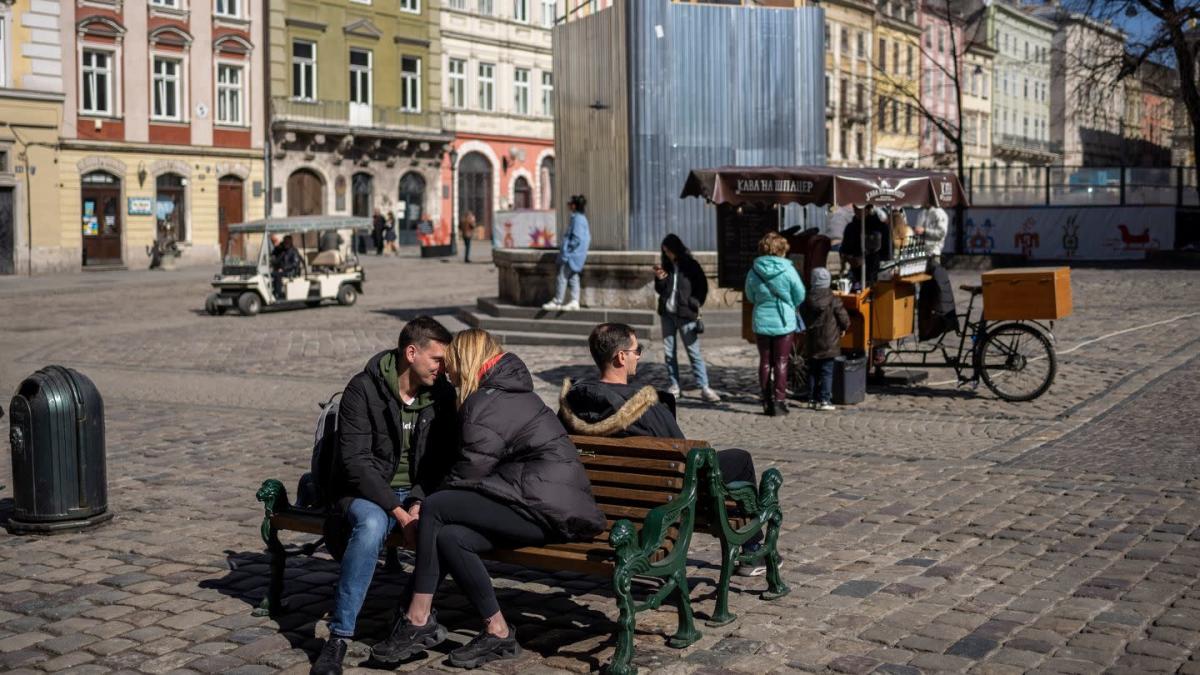 Lviv (dpa) – The war is far away on this spring day in southwestern Ukraine, in the foothills of the Carpathians. Around the spa town of Schidnytsia, known for its mineral waters, cyclists in sportswear pedal. The runners are also away from home.

Standing in front of the souvenir stalls are families who once would have been normal tourists, but are now refugees. Despite the influx of refugees and terrifying images of besieged cities in the north and east, much of Ukraine has so far been untouched by war. Only one sign reminds of the war here: “Russian warship, go to hell.”

At the Smilnyzja border crossing near the city of Lviv (formerly: Lemberg), only a few travelers from Poland want to enter Ukraine. Waiting time is less than an hour. Officials are content with a quick passport check and a quick look in the trunk. Not even a question about vaccinations or corona tests, although the signs on the building indicate this. On the other hand, humanitarian workers are waiting for the refugees.

Fuel at gas stations is scarce

After entering the country, you immediately notice that gas stations have run out of fuel. Many only have diesel, if at all. At another gas station on a major European road to the Carpathians, people are lining up to buy LPG. Premium 95 octane gasoline is rationed at 20 liters per car. Only normal gasoline, which is now unusual in Germany, can flow into the tank indefinitely.

However, Ukrainian Prime Minister Denys Schmyhal has promised his compatriots that the situation will improve. When the war began nearly a month ago, fuel spilled from neighboring Belarus, an ally of Russia. New EU supply chains are now being established. “According to the new regulations, the first 1,000 tons of fuel have already arrived,” the head of government said a few days ago.

The Ministry of the Interior wants to improve the supply situation. After the initial shock of the war, vigilante and police checkpoints were established throughout the country. However, as a result, the delivery traffic stopped. “We have just managed to reduce the number of checkpoints to 1,500, eliminating a large number of unnecessary checkpoints that only complicate movement and take time,” Interior Minister Denys Monastyrskyj said. And indeed, many checkpoints here are deserted.

In the small town of Boryslaw there is a lot of activity when it is sunny. Cars and minibuses crowd the main street. Traders offer fruits and vegetables. There is no shortage of food. Exchange houses are open. Due to restrictions imposed by the National Bank, they offer 36 hryvnia, the national currency, for one euro, 14 percent more than before the war.

Concern about the grain harvest in the country

Driving across the country, you notice the preparatory work for planting. The fields are freshly plowed. Part is already sown, by hand. There is great concern that the grain harvest in Ukraine may be poor or fail completely due to the war. So famine threatens not only Ukraine but also other countries. Much of the grain from what used to be the “breadbasket of the Soviet Union” is exported.

It is also striking how crowded the playgrounds are in the foothills of the Carpathians. For students who fled the war, face-to-face teaching is out of the question. Immediately after the start of the war, at least two weeks of vacation were ordered throughout the country. Depending on the local security situation, normal classes started last week. Various TV stations also broadcast distance learning, such as during the Corona quarantine.

Moreover, since the early days of the war, a standard program has been running 24 hours a day on television, which is also taken over by some radio stations. Only a few special interest channels carry children’s movies or shows. President Volodymyr Zelenskyj also ordered that the latest news channels switch to the standard program. The goal: to deprive the nationalist opposition around former President Petro Poroshenko and his TV news channels of one last chance to criticize the government’s course.

The consequences of the war can also be seen in a village in the Carpathians, where many refugees seek protection from Russian troops. In a supermarket there are now first gaps in the shelves. In particular, tea bags and preserves are only available to a limited extent. There are also problems with buckwheat and cereals. In other places, the smell of fresh bread beckons. The shelves are full of various varieties.

Vegetables like cabbage, beets, carrots, onions and garlic are available, but there are also eggs, cheese and meat. The bank card works at the checkout. Only the sale of alcohol is prohibited almost everywhere. Restaurants may still be full because they still serve drinks there. Groups of men order beer and herbal liquor. However, the last round is already at 9:00 p.m. With the start of the curfew from 10:00 p.m. to 7:00 a.m., no one is allowed to be on the street.