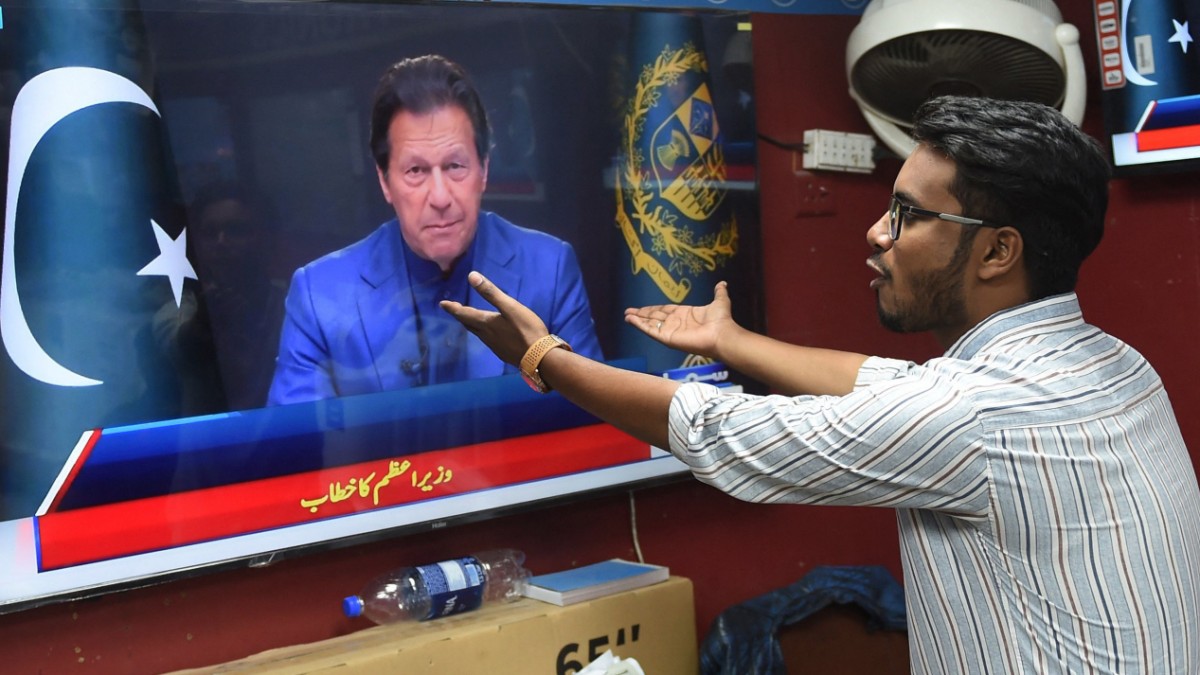 On the day of Russia’s invasion of Ukraine, Imran Khan sat next to Vladimir Putin as a guest of state, not exactly ideal images for a head of government who relies on international aid to stave off impending national bankruptcy. If Khan wanted a different time for his visit to Moscow, he gave no indication.

After his return, the Pakistani prime minister avoided condemning the Russian invasion of the neighboring country. Khan added as much, leaving Pakistan with mild regret over “the situation between Russia and Ukraine.” At the same time, he publicly tried to reduce the complicated relationship with Moscow to two useful deals: They wanted to buy gas and agreed to import two million tons of grain, he said in Islamabad, without mentioning a word that the wheat for Pakistan had previously come from Ukraine.

The West would have liked to hear harsh tones directed at Moscow, but Pakistan reacted with outrage to a letter to this effect from 22 diplomatic missions in Islamabad. Khan publicly asked: “Are we your slaves?” Pakistan abstained from voting on the UN-Ukraine resolution, as did China, India and 33 other countries.

The reluctance may also have something to do with the fact that Khan and the Pakistani military have barely managed to mend ailing relations with Russia. Both countries had been bitter enemies during the Cold War, Islamabad supported Washington and supported the holy warriors in Afghanistan to drive out the Soviet army. Four decades later, Pakistan does not want to upset the Kremlin. Any nuisance, in Islamabad’s view, would play into the hands of arch-rival India.

From a Western perspective, the Ukraine war may be dominating all political efforts right now, but it’s different for Khan; he is distracted because he first has to get rid of a problem nearby: the opposition wants to overthrow him and has tabled a motion of no confidence. Khan has never been so tight. Gone are the days when he could always use his nimbus as a cricket legend to his own advantage and the competition seemed hopelessly divided. For a long time, Khan hardly had to fear her. But now? “The chances are not good for him,” the newspaper commented. dawn.

On the other hand, everyone knows that Khan is a fighter. He will do everything in his power to tame suspected dissidents and rebels in his own ranks before the vote in parliament, possibly in a few days. Uncertainty is mounting among his supporters as Khan’s PTI party, along with his allies, only has a majority of 17 votes.

Whenever Khan feels pressure, his favorite thing to do is go out on the open stage and give the determined “Kaptaan.” As captain, he once led his national cricket team to victory in the World Cup. That was thirty years ago, but the embattled prime minister is confident his reputation as a motivator and strategist lives on. Almost every day he escalates his attacks against the opposition, whose leaders he vilifies as “bandits” and “mafia” and more or less openly threatens corruption proceedings as soon as he survives the no-confidence motion. His rivals in most of him belong to established political dynasties, the Bhutto clan and the Sharif clan. Currently, both camps are tactically united to remove the prime minister from office.

Never one of those circles that have dominated Pakistan for decades as a feudal class or industrial magnate, Khan does not draw on any dynastic heritage, relying instead on his reputation as an athlete. And so, as Pakistani columnist Hamid Mir recently pointed out, he styled himself as the savior of the nation.

Many remember how Khan once shouted that he would rather take his own life than ask the world for credit. However, the prime minister then had to collect aid, as Pakistan relies on bailout packages from the International Monetary Fund (IMF). And Khan seeks proximity to China, which is expanding connections through Pakistan to the Indian Ocean for its Silk Road.

Pakistan’s largest financial newspaper business registrar Citing government sources, it reported that Islamabad has secured $21 billion in Chinese aid, but this has not been officially confirmed. One thing is for sure: Khan needs these billions. He has promised new subsidies for fuel and electricity as the Ukraine war has pushed up prices. This, in turn, makes talks with the IMF, which is supposed to bring more aid on the way, more difficult.

This increases the pressure on a prime minister who has already lost popularity. In a January poll, 55 percent of those polled said Khan’s party was governing worse than expected. Khan lost a regional vote in the area bordering Afghanistan months ago. Four years after the triumph of the national elections, the head of government is increasingly disenchanted. The promised release of 2018: for many it did not come true. Poverty, rising prices and lack of prospects for young people remain the most pressing problems, along with terror from extremist bombings.

The no-confidence vote is now the biggest political danger for the 69-year-old prime minister. At the same time, many are wondering: Where is the army really? So far, Khan has kept the generals at bay; no Pakistani head of government is strong enough to withstand a confrontation with the military for long. Khan’s Information Minister Fawad Chaudhry dismissed speculation that the military had already switched sides to the opposition. However, the military are good at hiding their influence. And so it remains uncertain how the generals have positioned themselves.