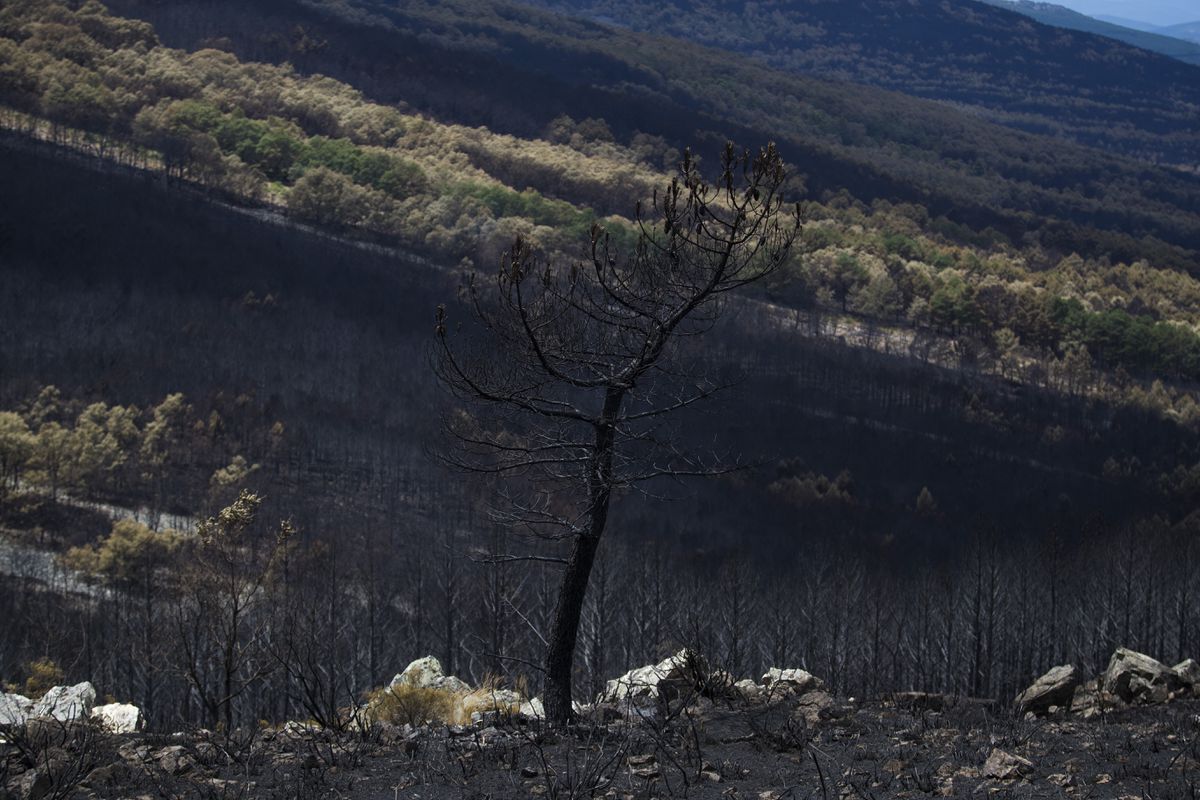 On the hell of the Sierra de la Culebra (Zamora) it rains holy water: this Monday the sky is still gray and the clouds have replaced the smoke. The crackling of the flames can no longer be heard. Just the trickle of water on the trees. The smell of burning earth breaks the eerie stillness of the forests devastated by a fire that has destroyed more than 30,000 hectares. It seems impossible that the people of Zamora, who fought the flames while demanding more funds, forget the ecological and economic tragedy in some towns that thrive on this natural heritage. It’s also impossible to look up and miss the marks of one of the worst fires ever recorded in Spain.

All for a ray, albeit with nuances. A thunderstorm last Wednesday afternoon caused the first sparks in this natural area, fueled by high winds, stifling heat and drought that aggravated the situation. While no one disputes the accidental origin, many in the area believe political decisions made the disaster worse. The speech against the leadership of the Junta de Castilla y León (governed in coalition by PP and Vox) is echoed among the firefighters, ranchers, neighbors or biologists consulted, who criticize it despite the signs pointing to a “hell” risk of fire The Ministry of the Environment, headed by Juan Carlos Suárez-Quiñones, declared a “medium risk” and not high, a level established on July 1 that implies less mobilization.

José Ignacio García, President of the Professional Firefighters Platform of Castilla y León, speaks in a trembling voice about the disaster: “What else has to happen? They have to mobilize troops from the start, there were people in their homes asking for help but they were not notified. García had been working for less than a year to put out the Navalacruz (Ávila) fire, which until last week held the record for charred area in the municipality at 22,000 hectares. “Nothing was learned!” debunks the firefighter, who stands “with hair standing on end” as he reviews the extent of the tragedy, and calls for resignations. The scarcity of regional resources is evident as dozens of fire engines from other communities and the Military Emergency Unit plow the streets, gutters blackened, while some brigades douse the last embers.

The destruction goes beyond the mere landscape as these lands depend on the mountains. Mushrooms and licenses for their autumn picking fill municipal coffers and country houses. They are also home to wolf watchers. Beekeeping also generates income and livestock feed stomachs and pockets. In an escalating situation, one of the cow managers, César Panizo, points out the black-spotted pastures near the borders where his cattle cannot chew the cud. “I’m missing an animal,” he complains. The flames swept through the facilities and the Civil Guard evacuated them to ensure their safety. The cattle were left alone and only the help of the fire brigade kept them from burning.

The consequences can be seen on the cattle that have stepped on the burning meadows: several are limping with injured hooves and some have sore udders with burns. The 115 animals “are sad” and the advance of the tongues of fire made him fear for his livelihood: “At least I can continue with them and earn my living, there are no factories or companies here.”

Wilder are the wolves observed by biologist Javier Talegón, who fears both that several packs have migrated from the Sierra de la Culebra and that tourism around the species will dwindle: “According to a government analysis from 2018, it generates 1 .8 million euros per year.” He also complains that the council did not expect such events in view of the extreme heat forecast: “Even a five-year-old child knew that this would happen.”

If the children knew about it, what would Tomasa Moldón, 76, and Victoria Remesal, 80, not know?The two women analyze from Ferreras de Arriba, another of the displaced communities, the lack of foresight that led to the debacle. Moldón missed more troops at the start of a fire they already suspected would come one day, given the neglect of forests, lack of rain and high temperatures: “It was hell.” “What a shock, what a shock,” sighs Remesal, who casually carries a bundle of twigs with which she will support the green beans she indulges in her garden, saved thanks to the fact that professional firefighters and the cooperation of the Population prevented the fire from entering the village. The woman from Zamora, who carries Saint Christopher on a bunch of keys, has been praying continuously since the beginning of the drama: “I have many saints, but they pay little attention to me.” Even the politicians he asks for did not heed the warnings that the yellow fields of Castile burn easily in summer … and at the end of spring.

Fall Guys: How to play with your friends via crossplay