Oscars 2022: Celebrities react as Will Smith slaps Chris Rock at the Oscars 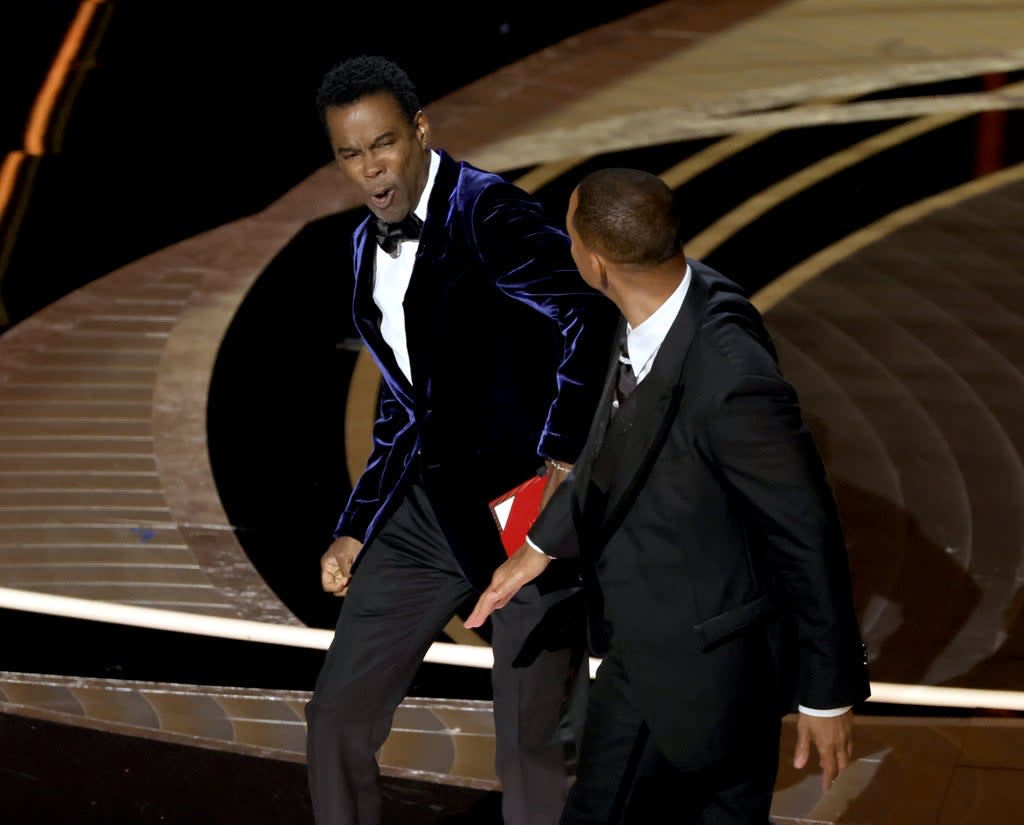 Celebrities have reacted with a mix of shock and anger after Will Smith slapped Chris Rock on stage at the Oscars.

Comedian Rock, who was presenting an award, made a joke onstage about Smith’s wife Jada Pinkett Smith’s hair loss being due to alopecia, saying, “Jada, I can’t wait for GI Jane two”.

Smith ran up on stage and punched Rock before going back to his seat and yelling, “Keep my wife’s name out of your fucking mouth.”

He also revealed what Denzel Washington told him after the incident: “At your highest point, that’s when the devil comes for you.”

“I am called in my life to love people and protect people and be a river to my people,” Smith said. “I know, to do what we do, we have to be able to take abuse.

I could have killed him. That is pure rage and violence out of control. They’ve heard a million jokes about them in the last three decades. They are not new to the world of Hollywood and comedy. He lost his mind,” he wrote on Twitter.

“It looks like Will Smith’s plan to make the comedian and the world not make jokes about him is not going to work. The Williams family must be furious. Pure narcissism,” he added.

“So, GI Jane was beautiful. What exactly is so insulting about being compared to a ravishing, ripped Demi? she wrote she, referencing the film starring Demi Moore directed by Ridley Scott.

Oscars 2022: Will Smith’s night at the Oscars – In pictures

Comedian Kathy Griffin wrote: “Let me tell you something, it is very bad practice to go on stage and physically assault a comedian. Now we all have to worry about who wants to be the next Will Smith in comedy clubs and theaters.”

Will and Jada’s son, Jaden Smith, tweeted, “And this is how we do it,” then posted, “My dad’s speech made me cry.”

Actress and model Jodie Turner-Smith said: “And as far as *that incident* goes… . . I’m still processing,’ she wrote. “I have secondhand embarrassment for everyone involved.”

Booker Prize-winning author Bernardine Evaristo tweeted: “What a wake up call. Only the fifth black man in nearly 100 years to win an Oscar for the lead male role, and the first in 16 years, resorts to violence rather than using the power of words to kill Chris Rock. He then claims that God and Love forced him to do it.”

Will Smith owes Chris Rock a huge apology. There is no excuse for what he did. He’s lucky Chris doesn’t press assault charges. The excuses he made tonight were nonsense.”

Speaking to reporters on the red carpet, former One Direction member Liam Payne said: “I think whatever he felt he did, he had a right to do.”

He added that Rock, Smith and Pinkett-Smith were all losers in the fight.

“I had to leave my chair, I’ll be honest with you, it hurt me very deeply.”

British comedian Matt Lucas tweeted: “I thought I dreamed this but I just looked on YouTube and it really happened.”

Piers Morgan called it the “ugliest moment” in Oscar history, tweeting: “It was real. I just saw the uncensored images. Will Smith slammed Chris Rock for making a GI Jane joke about his wife Jada Pinkett Smith (who suffers from alopecia), then yelled at him twice ‘keep my wife’s name out of your fucking mouth’.”

“B!tch never play with me. LOL,” rapper 50 Cent captioned a screenshot of the Fresh Prince of Bel Air actor swinging in the stand-up comic.

Actress Mia Farrow also called it the “ugliest moment” of the Oscars.

Singer Nicki Minaj, defending Smith, tweeted: “You just have to witness in real time what happens in a man’s soul when he looks at the woman he loves and sees her holding back tears over a ‘little joke’ at his expense. .

“This is what each and every real man feels at that moment. As they watch the joke, he sees her pain.”

Democratic politician Malcolm Kenyatta, who was running for Senate in Philadelphia, commented, “Will Smith beating Chris Rock and QuestLove winning an Oscar are the two most consecutive things that have happened in Philly at the Oscars.”

Derek Blasberg, Director of Fashion and Beauty at YouTube, posted: “These are all on my table at the @vanityfair Oscars dinner googling maniacally wtf will smith just told chris rock.”

Will Smith did not seem fazed by the altercation and was seen dancing and singing his hit ‘Gettin’ Jiggy With It’ at a Vanity Fair after party.

The Los Angeles Police Department (LAPD) said no police report has yet been filed following the altercation.

“LAPD investigative entities are aware of an incident between two individuals during the Academy Awards show,” an LAPD spokesperson told the PA news agency.

“The incident involved one individual slapping another. The individual involved refused to file a police report.

“If the involved party wants a police report at a later date, the LAPD will be available to complete an investigative report.”

The Academy responded by saying that it “does not condone violence in any form.”

“Tonight we are delighted to celebrate the winners of the 94th Academy Awards, who deserve this moment of recognition from their peers and film lovers around the world.”

Fans were quick to point out that this isn’t the first time Rock has made jokes at Pinkett-Smith’s expense at the prestigious ceremony. In 2016, when he introduced the awards that had been boycotted for their lack of diversity, Rock said, “Jada [Pinkett Smith] Boycotting the Oscars is like boycotting Rihanna’s panties. I wasn’t invited.”

- Advertisement -
Share
Facebook
Twitter
Pinterest
WhatsApp
Previous articleA historic meeting between Blinken and Arab ministers in Israel’s Negev desert
Next articleAt least 9 luxury yachts owned by Russian oligarchs are said to have turned off their tracking systems after the start of the Ukraine war.