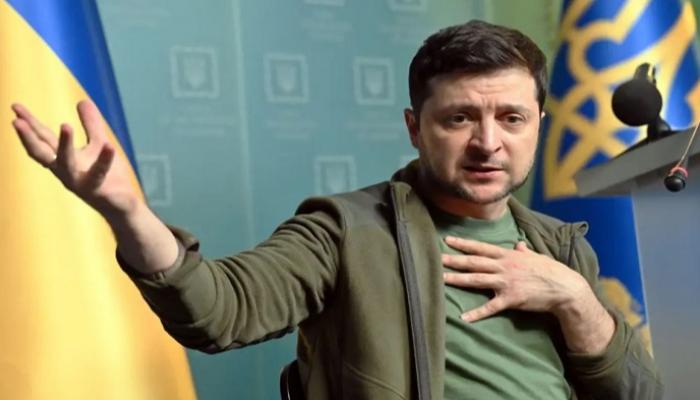 Ukrainian President Volodymyr Zelensky on Wednesday urged the peoples of the world to demonstrate in the streets against the Russian invasion of his country.

In a video recording in which he spoke in English, Zelensky called for “the lifting of Ukrainian slogans in support of Ukraine, in support of freedom and life.”

He added: “Come down to your squares, to your streets, show yourselves and make your voice heard.”

In an emotional speech on the eve of the one-month anniversary of Russia’s invasion of Ukraine, Zelensky urged the peoples of the world to “oppose the war from March 24” to show their opposition to the Russian war.

He continued: “The world must stop the war.”

The United Nations General Assembly is due to vote on a resolution on the humanitarian situation in Ukraine on Thursday.

Due to the large number of speakers, not all country representatives were able to address the highest UN body in New York on Wednesday.

The resolution in question is a clearly anti-Russian text put forward by Ukraine that Western diplomats hope will be adopted by a large majority.

But there is also a more neutral South African text proposal that does not name Moscow as an aggressor, which could prompt a vote on the first draft.

Meanwhile, Russia failed on Wednesday in its attempt to pass its own humanitarian resolution on the conflict in Ukraine at the UN Security Council.

Moscow did not get the necessary nine votes from the 15 members of the United Nations to pass this resolution.

Only China joined Russia in voting in favor of the text. The remaining 13 countries abstained from voting.