One Frantic Hour: The Race to Save the Koori Mail from Rising Floods 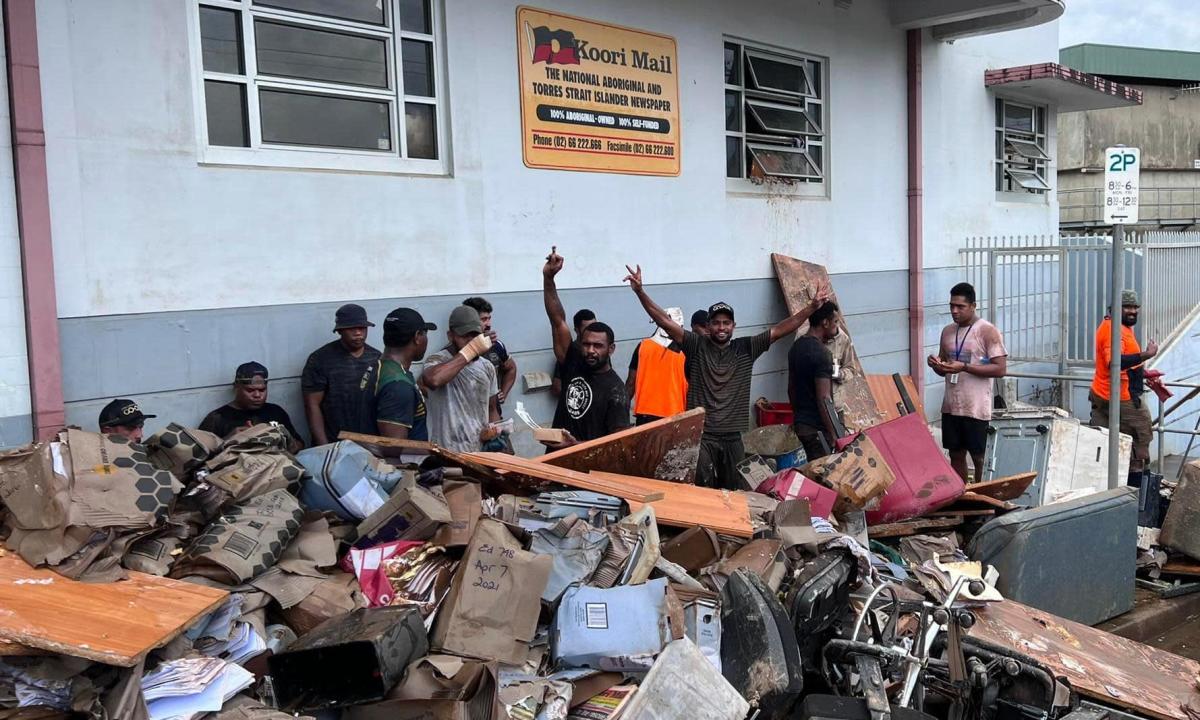 When the Lismore River burst its banks, the indigenous newspaper was greatly affected. With printing paused, your staff is still finding ways to serve the community.

It was midnight, hours before the floods hit Lismore, and Naomi Moran was in the Koori Mail office, frantically working to save an indigenous institution.

The newspaper’s three-story building, located perilously close to the rising Wilsons River, was expected to be flooded, just as it was in 2017.

Related: He fears the entire Lismore art gallery collection will be lost in the NSW floods

General Manager Moran and her team had followed emergency services advice to the letter, moving important documents above forecast flood levels at the time.

But by midnight, when the true scale of the impending disaster became clear, Moran, her husband and several friends realized that it would not be enough.

They ran like crazy to the office and had only an hour left to get all the newspaper’s computers, hard drives and servers up to the third floor.

“What was valuable to us was what was on those computers because that is all the layout of our pages, basically everything we need to print a newspaper,” says Moran, a Dunghutti and Nyangbal/Arakwal woman from the Bundjalung Nation, to Guardian Australia.

If the third floor were lost, he says, the Koori Mail would be gone for up to a year.

That would have dealt a devastating financial blow to Australia’s only wholly indigenous-owned and -operated newspaper, which gives its profits back to Aboriginal communities.

“I just remember Monday, I was just monitoring all the reports, trying to see bits of buildings from helicopter footage on the news to see if we could see the Koori Mail building,” he says. “Just that anxiety about ‘did he make it to the third floor?’, that’s all I was worried about.”

It wasn’t until Tuesday that Moran saw the footage.

The building was heavily hit. The first and second floors were destroyed. The newspaper’s print archive was among the areas removed.

“All the paper editions printed by Koori Mail in the last 30 years have completely disappeared,” says Moran. “There was a $20,000 Albert Namatjira original, probably more valuable, floating around. he just left. “

Fortunately, the third floor was saved.

But the damage is such that, for the first time in its 30-year history, Koori Mail has been forced to temporarily stop publishing. Each out-of-print issue costs between $60,000 and $100,000, Moran says.

People are going through the most traumatic time of their lives, and a pair of rubber boots and a spray bottle are not going to cut it.

“Thirty years of Koori Mail being the voice of Australia’s indigenous people and all of a sudden that voice stops,” he says. “Obviously it’s affected us as a business and product as a newspaper, but obviously it’s affecting our readers across the country who trust us as a source of information and storytelling, that’s our cultural responsibility and to have it taken away from us in that way is really tragic.” .

As the newspaper recovers, its staff have found other ways to serve their region.

Koori Mail employees quickly organized shipments of food and supplies to nearby indigenous communities, including around Muli Muli and Tabulam, which lost road access to major population centers.

From their underground storage area, the team also set up what they called “Koori Coles,” a flood relief center open to indigenous and non-indigenous communities alike.

“It’s not just about your groceries and your cleaning products, your bedding and your clothes, it’s a holistic approach to what the community needs. We have a medical team here, we have health and wellness, we have massage therapists and people who do bodywork.”

“People are going through the most traumatic time of their lives, and a pair of rubber boots and a spray bottle are not going to cut it.”

Many of the newspaper’s staff work and volunteer at a time of immense personal loss.

The interim editor, Darren Coyne, lost his home and had to be rescued during the floods. He is now working hard to get the paper back on track.

They hope to resume resume printing in April.

“For the first time ever, even though we are 100% self-funded, we need people to hold our hand through this process,” says Moran. “Take us by the hand, support where you can, whether it be contributing to the Koori Mail rebuilding fund, taking some pressure off us, and making sure we can rebuild our office.”