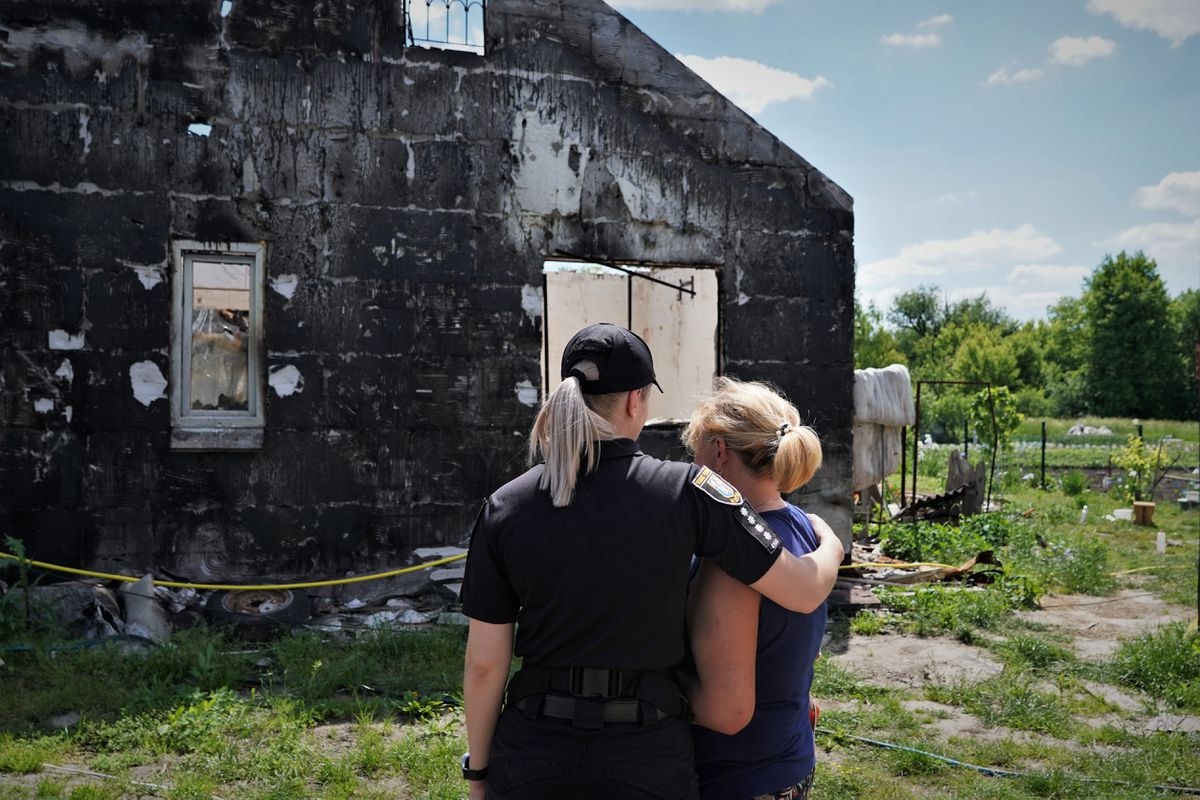 A hooded collaborator pointed to neighbors so as not to be recognized while escorting Russian soldiers in Irpin, on the outskirts of Kyiv. It will be given by Dr. Andrii Levkivski, head of the city’s polyclinic and one of the few on board the ambulances who witnessed the street-level occupation, tells the story. He came across commoners shot in the head, with their hands tied and kindergartens turned into gallows. He himself attended the funeral of a man who had already arrived dead in the hospital garden. He escaped in the car with his pregnant wife and they were shot dead. She was rescued but lost the baby after multiple surgeries. Levkivski appreciates the pictures on his phone. He knows that despite the rudeness, they are important to eliminate responsibilities. Testimonies such as that of this doctor or that of rape victims and witnesses of police officer Katerina Yuskevich, who directs a mobile police unit, are essential in drawing the map of war crimes in Ukraine.

The Kiev government, which has so far registered 16,271 cases, is preparing the so-called “Book of Executioners”, as announced by President Volodimir Zelenski. His goal is to give a face to those responsible for the murders, rapes and lootings committed by the Russian army. Police Chief Ihor Klimenko reported Monday that the deaths of more than 12,000 civilians were being investigated. 75% are men, 2% are children and the rest are women. Meanwhile, pits continue to be opened. The latest, this week with seven civilians killed in the outskirts of Kyiv. Officials said their hands were tied for some working on identification and the circumstances of the death.

Police, coroners, doctors, victims, witnesses… that’s the goal talk both the living and the dead to find out what happened. A few dozen kilometers north of Irpin, in the town of Demydiv, Yuri Saluta, 28, was one of the volunteers who, kitted out in a Red Cross vest, distributed relief supplies to residents. He did this every day with the consent of the Kremlin troops who entered the city, which lies on the road leading from the Chernobyl nuclear power plant to Kyiv.

A group of Russian soldiers, along with an attendant, forced him to lie face down on the ground on March 22. “We’re going to teach you what life is,” says Saluta, who heard it before receiving two shots. One pierced his right instep and another hit his left leg. Two and a half months later, he was still recovering in the Vishgorod hospital north of Kyiv. “They thought we were members of the Ukrainian secret service. You didn’t believe us. (…) They put me in a cellar and interrogated me. I think they were under some substance. They took my watch, my wallet, my phone…”. The Russians themselves wanted to evacuate him through Belarus, but he refused and reached Vishgorod thanks to a humanitarian corridor opened on the ruins of the bridge, which was blown up to stop the invasion advance. In the same bed in which he received EL PAÍS, he was questioned by police officers documenting war crimes.

“These testimonies are very important,” emphasizes Natalia Shilan, 54, the director of the hospital, stressing at the same time that they try to have the medical report in every case, how the events occurred, the place, the day … Remember how, although Vishgorod was never in Russian hands, from the first days in the hospital they lived “in a sea of ​​blood”, because it was very close to the front. What pained him most were the young people who arrived as amputees. Others went back to the front as soon as they recovered. At the back of the hospital, a refrigerated truck supported the crowded morgue.

“I’ve never seen so many bodies,” says Vyacheslav Valentynovych, 49, the only coroner. Of the more than 300 who came to them, more than 95% were civilians. For several weeks he worked with a forensic team sent by the French government. A DNA sample was taken from a piece of bone from those who were not identified. They were trying to figure out how everyone had died. Another French team, the weapons specialist, is now investigating in the Chernihiv region to provide new data on war crimes, Prosecutor General Iryna Venediktova said.

But alongside opening graves and forensic and weapons studies, there is still hard fieldwork ahead. The Kiev authorities roam the country city by city, house by house and resident by resident. With patience, empathy and sensitivity, they immerse themselves in the traumatized memory of the population. They visit town halls, shops, churches, hospitals or private homes. The lead that leads to the identification and documentation of a new case can appear anywhere, admits agent Katerina Yuskevich, 35. She heads one of the new mobile police units which, accompanied by a psychologist, have been combing the areas of the country liberated from the Russian occupation since mid-April, and which consists mainly of women.

Their main goal is to expose sexual violence, but in the end they are the shroud of tears for a population that has suffered all kinds of abuse in cities and who will take a long time to recover from the trauma. Liubov, a 60-year-old cook, bursts into tears in front of her destroyed house. It had been renovated by her children just a few months before the war, after she and her husband retired. Agent Yuskevich takes her by the shoulder and tries in vain to comfort her while admitting that in the midst of a war crimes investigation material redress is not easy to come by.

The family still has the requested loan for the work ahead of them. Lyubov, who prefers not to give his last name, says that they spent almost the whole month not leaving the basement and that after the Russians left, they found the remains of soldiers from both sides in the area. “I can’t sleep, I hear explosions in my dreams, I get up at five, six with fear…” she says, sobbing next to the charred walls of her former home. “You’re still on February 24th [día que comenzó la invasión]She has to come up today, overcome the fear. The memory still has to do its job,” replies psychologist Olena Shtyria in a soothing tone.

Sometimes, Yuskevich says, they choose to carry out their mission without a uniform because it avoids neighborhood gossip, accusations and re-victimization and facilitates confidentiality. “We settle into the victim’s comfort zone and at the same time better gain his trust to gain access to his house, his business… Sometimes it takes us several visits to achieve this,” explains the agent in the city of Lukianivka , 80 kilometers east of the center of Kyiv. He has several brochures in his hands that offer advice, information, contacts and point out the importance of reporting. The groceries and toiletries they distribute are a tool the patrol also uses to break down barriers with residents.

The psychologist cannot give details for professional reasons, but notes that she has noticed how difficult it is for men to be under occupation. “According to stereotypes, they are the defenders, but they are the ones who killed the Russians the most. Therefore, women went more for food or water. If something happened to the woman, they felt that they were not living up to their protective role. I never thought of that before the war,” Olena Shtyria recalls. “I’m surprised there are women who tell us they were raped in front of their husbands while pointed at guns. It’s my job, but for them it’s their life,” Yuskevich, a police officer since 2015, admits with a sigh.

Youth Police are still on the van that the mobile team travels in, recycled for this new feature. But instead of patrolling Kyiv on a Saturday night, he encounters back roads. Destroyed houses, bullets and bombs and some rusty skeletons of main battle tanks line the street. Surprised by the visit, some neighbors look over their shoulders. Ana, 92 years old, leans on her wooden stick and approaches to sell nuts to the agents. They politely decline the offer, but give her a pack of spaghetti, which the lady doesn’t know what it is. “God bless you,” he thanks as he walks slowly and slightly stooped. A white van with the inscription “Putin, to hell” drives by along the street.