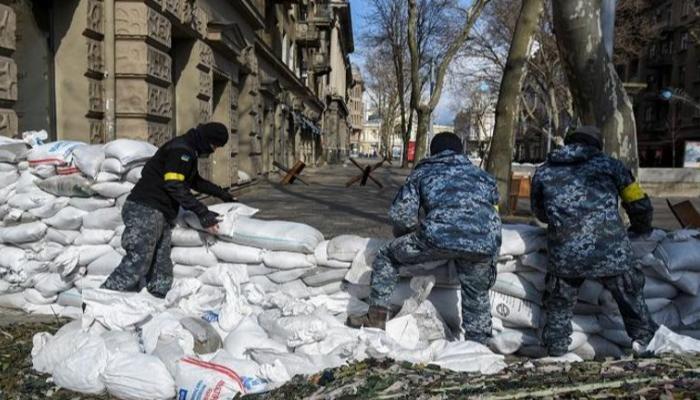 The Ukrainian military said Monday that Russian forces are trying to establish themselves in areas they control and keep up the pace of their offensive.

And preparing for new attacks after two and a half weeks of the military operation.

“The enemy is forming and moving strategic reserves towards our borders,” Ukraine’s General Staff said in its daily bulletin, adding that further attacks are expected to target Kharkiv, Sumy and the Berwari suburb of the capital Kiev.

The Ukrainian side stated that “Russian forces are destroying the military and civil infrastructure of the country, in violation of international humanitarian law.”

The bulletin said that “Russian forces in the Luhansk region of eastern Ukraine were primarily focused on advancing towards Severodonetsk.”

According to the Ukrainian army commanders, “the Russians suffered human losses and retreated to the towns of Tobolsky and Shpakivka in the Kharkiv region.”

The information could not be independently verified.

On Sunday, a Russian attack on a military training base in Yavoriv, ​​near the western city of Lviv, killed at least 35 people and wounded 134 others, while Moscow, for its part, estimated the death toll. at 180.

Meanwhile, diplomatic efforts continue, with Kiev and Moscow expressing cautious optimism about the course of peace talks between the two countries.

Ukrainian President Volodymyr Zelensky said securing a meeting between himself and Russian President Vladimir Putin was a key task in the negotiations.

“Our delegation has a clear mission: to do everything possible so that a meeting between the two presidents takes place,” Zelensky said in a video address released Monday morning.

Speaking to Russian state television on Sunday, Kremlin spokesman Dmitry Peskov did not rule out a meeting between Putin and Zelensky.

Online talks between Russian and Ukrainian negotiators are scheduled for Monday.