On the eve of the Madrid summit, with the support of the IU and without Podemos, a massive anti-NATO demonstration is accused 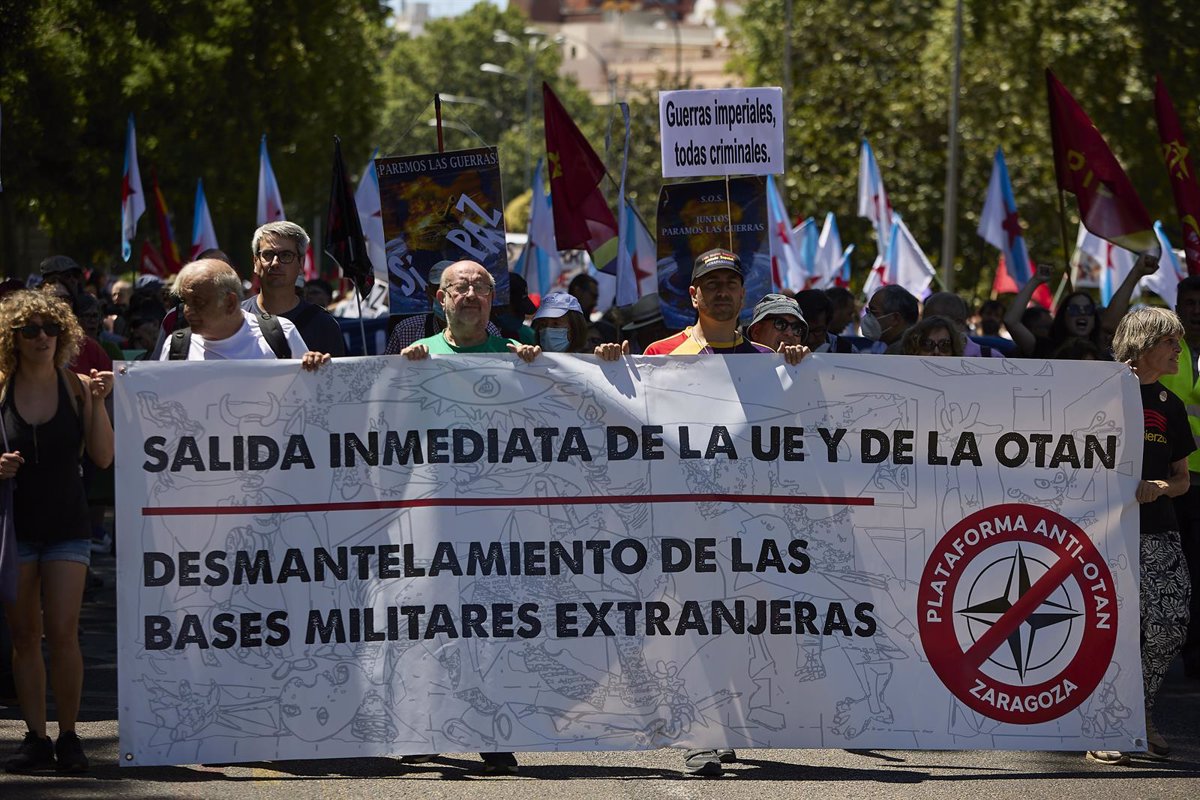 The organization confirms that 30,000 people supported the march, while the government delegation lowers the figure to 2,200

A massive demonstration toured the center of Madrid this Sunday to reject NATO, on the eve of the Atlantic Alliance Summit that begins this Tuesday in Madrid, and the increase in military spending, a mobilization supported by a large number of IU leaders but had no representation of the leadership of Podemos.

The demonstration, convened by the state platform “NATO No” and other groups as the culmination of the alternative counter-summit for peace, started at noon in Atocha to visit the Paseo del Prado, Cibeles and Gran Vía until reaching the Plaza de España arrived. where A brief reading of the unified manifesto was conducted, which among its points calls for the dissolution of this military organization.

The convocation movement flexed its muscles during this protest and, according to organization sources, the number of participants has exceeded 30,000 people, a number that has been significantly reduced by the Madrid government delegation, which estimates the total number of protesters to be 2,200, according to estimates they describe Europa Press from that department.

HIGH PRESENCE OF IU AND ABSENCE OF PODEMOS LEADERS

The march was supported by the IU and was attended by Secretary of State for the 2030 Agenda and President of the PCE Enrique Santiago, IU Federal Spokesperson Sira Rego, MEP of this formation Manu Pineda and MPs in Congress Miguel Ángel Bustamante and Roser Maestro , along with other positions of the federal executive such as Carlos Sánchez Mato and leaders of the various regional federations.

However, the formation remained in the background and the leading role of the header of the organizations and groups grouping the platform, with the main banner “No to war, No to NATO and peace”.

In the case of Podemos, no main position or representatives of his executive took part in the march and, as already advanced from the purple formation, this indicated his low profile for this mobilization. As expected, no minister from the confederate space took part.

Overseen by a large police force and without incident during its development, other prominent slogans were also seen within the protest, such as “No to militaristic budgets. We don’t pay for your wars and ‘outside bases (military)’. “NATO no, bases out, the war is always lost by the people”, carried by the representatives of the PCE, or “Let’s not worry about the planet at the gates”.

On the other hand, the BNG Congressman Néstor Rego, who was part of the headline “Galicia against NATO” and the anti-capitalist leader, Miguel Urbán, who led another part of the demonstration along with members of your party. An anecdotal presence was that of CUP MP Mireia Vehí, who coincided with the demonstration as she walked down Gran Vía.

Slogans were also heard among the participants chanting in different passages of the demonstration: “Down with militarism, NATO will fall”, “No NATO, bases out”, “Guilty NATO, military NATO” or “Solidarity with the Dombas ‘. “No to war” or “Peace now”. In addition, some placards were seen opposing the Executive’s position ahead of the Atlantic Alliance Summit, such as: B. “complice government” or shouts like “imperialist vassal”.

The IU spokeswoman has indicated to the media that her participation in this demonstration will lead to some conflicts within the coalition with the PSOE, as they are “other” political forces that have been able to agree on a program of social government, However, it is normal that they have “disagreements or nuances” regarding some issues.

For example, he has emphasized that his formation was conceived in full mobilizations against Spain’s entry into NATO, and since then the IU has retained its “pacifist and anti-militarist DNA”.

At the same time, he has defended that his organization values ​​the “culture of peace” and has again downplayed the fact that his support for the counter-summit generates conflict in the coalition, since, for example, his space was able to do with the PSOE the new measures of the anti-crisis decree.

For his part, Miguel Urbán declared that the NATO summit was “bad news” for Spain, adding that, as French President Enmanuele Macron has said, the alliance has come from a “brain dead” state and is now thanks to the “best moment” live invasion of Ukraine by Russian President Vladimir Putin.

And it is, according to the MEP, that “imperialism ultimately needs one another and feeds one another” versus a firm policy “for peace” and against increasing defense spending and “militarization” as organizations like NATO ” the only thing they are looking for is war”.

The collectives’ unified manifesto advocates the dissolution of NATO and the promotion of a new demilitarized security system, a call to renounce violence as a means of conflict resolution, a rejection of a 2% GDP increase in military spending, the conversion of all military industries and realign defense spending to strengthen public policies on health, education, housing, care and equality.