Olivia Marei: GZSZ star stands up to criticism about traveling while pregnant 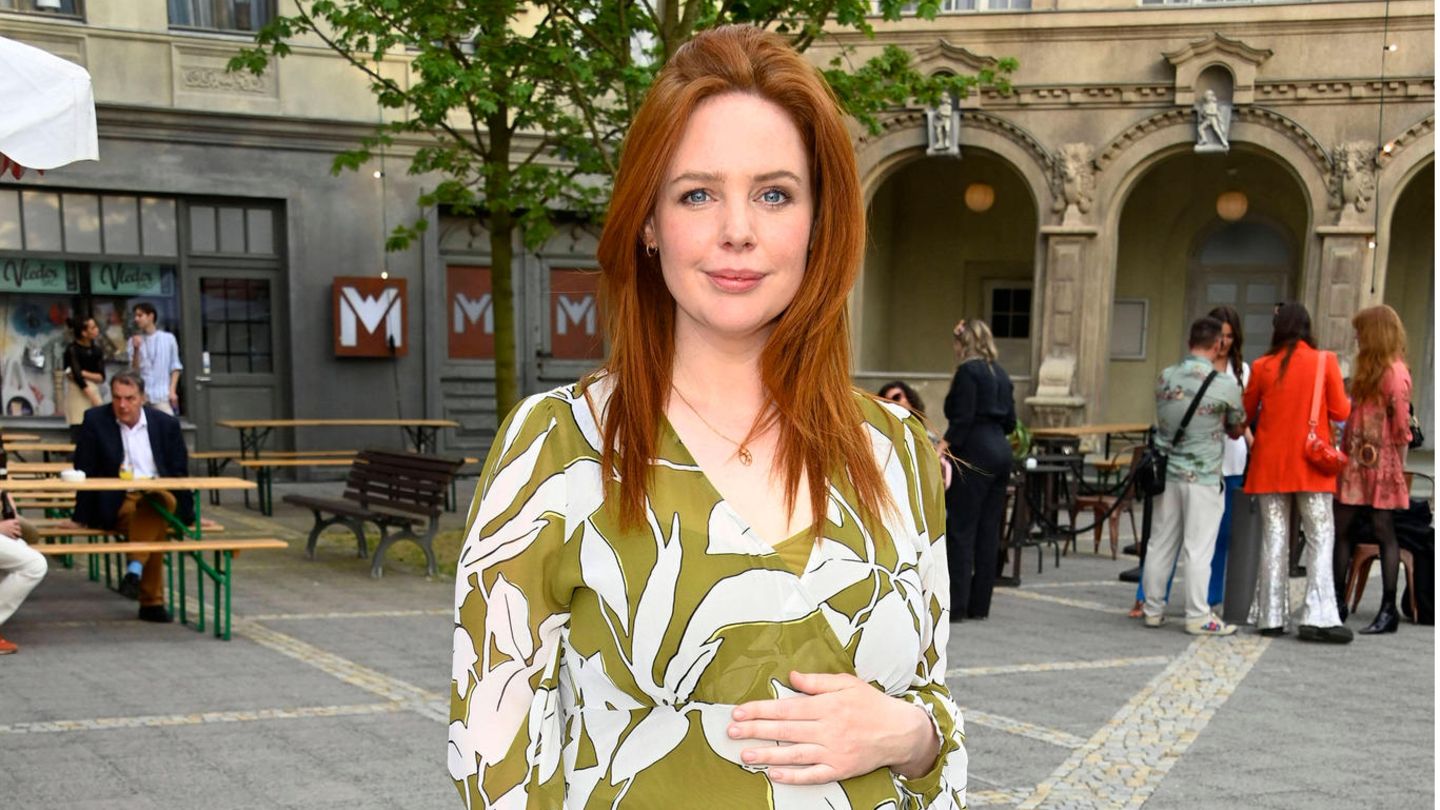 The TV news in the GALA ticker: Olivia Marei defends herself against criticism about traveling during pregnancy +++ “The farmer is looking for a wife”: The daughter of the cult couple Narumol and Josef has become a real teenager +++ ” Marriage in the early view” -Michael separates from his partner.

Olivia Marei defends herself against criticism about travel during pregnancy

Going on vacation pregnant – a topic that Olivia Marei, 32, is currently very busy with. But not because the GZSZ actress thinks about the subject so much herself, but because she comes face to face with it from the outside. Olivia was having a wonderful time in Africa with her husband Johannes and their son. On her Instagram account, the 32-year-old shared her experiences with elephants and lions with her many fans. It goes without saying that the criticisms are not long in coming.

“I actually received a comment that it would be irresponsible and had nothing to do with loving me traveling to such a country pregnant now. This comment troubled me on many levels,” says Olivia in RTL’s “VIPstagram” conference and adds: “Every woman has to decide for herself. I have a very simple pregnancy and I was in the mood to travel and wanted some relaxation, which I eu. Everything went well. It was agreed with my doctor and I stand by and I encourage all pregnant women who would like to travel to discuss this with their doctor and if there is nothing wrong with that , then do it.”

“But has she grown up” may think one or the other fan of “Bauer sucht Frau” at the sight of the last snapshot of Narumol, 57, on Instagram. There, the cult dating show contestant posts a rare photo of her 10-year-old daughter Jorafina, who will celebrate her eleventh birthday in July. Her husband Josef, a dairy farmer from Upper Bavaria, met and fell in love with the Thai native during the fifth season of the popular RTL show. They married in 2010. On the occasion of the birth of their daughter, there was even a television special in the summer of 2011, and the 60-person village of Josef in Chiemgau became a hub of tourist attraction.

Today, the crowds of visitors have probably died down. But Jorafina, almost eleven years old, has become a real young woman. In a traditional dirndl, she poses with her much older half-sister Jenny, from Narumol’s previous relationship. “I’m proud of you,” writes the 57-year-old, who won the hearts of viewers again in 2021 on “Kampf der Realitystars”, about the sweet snap. Its 57,000 subscribers are also enthusiastic, diligently handing out red hearts and some are surprised at “how quickly time flies”.

Michael didn’t find love on TV, but he sparked in private. But now it’s all over and done with. In “Marriage at First Sight”, he married Lisa. The two were equally friendly and seemed made for each other. But after just a few days of their honeymoon, Lisa grew increasingly uncomfortable and withdrew from Michael. They filed for divorce and wanted to remain friends. Michael fell in love again and went public with a selfie in June 2021.

But that love is now broken, as the TV show contestant reveals with a black-and-white photo of himself and his former partner on Instagram. He writes: “Each picture book has its color as well as black and white pictures. Our picture book will now end and close in black and white. steps together. [sic].” To date, Michael has not revealed the exact name of his former sweetheart.

On 25th wedding anniversary: ​​Astrid M. Fünderich reveals details about her engagement at the time

Call it a whirlwind engagement. Because as Astrid M. Fünderich, 58, now reveals to “Bild” on the occasion of her 25th wedding anniversary, her husband Mark Horyna, 53, quickly got to work after their first date. in the summer of 1997. After only two weeks of meeting, the producer of the film proposed to her in a restaurant.

A few days later, the two bought their wedding rings and went to the registry office. But then the disappointment: “As my husband is Austrian and was born in England, the civil servant explained to us that it would take months for all the papers to be gathered. But we wanted to get married right away!”, the wife of 58 years old – old reminders. That’s why the two booked a plane ticket to the United States for the next day to exchange their vows in Las Vegas – successfully. “Then my husband carried me in my black wedding dress to the doorstep of the Golden Nugget Hotel, which was across from the check-in desk. There we partied and smoked cigars,” Anna continues. .

Just a day after the new lovers swore eternal love to each other, they returned home, where they finally had their marriage legally registered a little later.

Astrid M. Fünderich and Mark Horyna are still happily together after 25 years of marriage.

Almost 25 years after the last episode of the hit show aired, “RTL Saturday Night” will be back on screen. A total of 146 episodes of the comedy show directed by Hugo Egon Balder, 72, were broadcast between 1993 and 1998 and the actors: Wigald Boning, 55, Esther Schweins, 52, Olli Dittrich, 65, Stefan Jürgens, 59, Tanja Schumann, 59, and Mirco Nontschew wrote television history with. The original cast insisted on being part of the big comeback. We miss only one: Mirco Nontschew died suddenly about six months ago at the age of 52.

With the reunion, his colleagues from “RTL Saturday Night” now want to commemorate the comedian, as Esther Schweins reveals in an interview with “Bild”. “That’s why we meet. It’s about a tribute we want to pay to Mirco,” she explains. Preparations should start “this year”. “It’s a reimagined, seamless connection to what we no longer know what it was. I can’t reveal more yet,” she says mysteriously. But one thing is certain: “It was the greatest thing in the world.”

At The Bachelor 2019 and Love Island 2020, she was still looking for true love. Now Nathalia Goncalves has not only found the right person, but another dream has also come true for the 28-year-old. She and her boyfriend are expecting children. The Brazilian beauty went public with the sweet baby news via Instagram. “More than one heart beats inside me,” she wrote of a snap in which she showcased her baby bump with a yellow tube dress. In a second photo, she holds an ultrasound image in front of the camera while her lover places his hands on her stomach.

She could no longer hide it, as Nathalia reveals in her Instagram story. “Well, finally I don’t have to hide the fact that I’m expecting a baby. Now you can definitely understand why I’m always tired and always so hungry,” she said with relief. “Well, if it was up to me, I would have posted it like this in a month or two that I’m pregnant. But I get so many messages from you every day like, ‘Are you pregnant? You look pregnant’ . So I couldn’t hide it anymore. That’s why he finally came out.”

Congratulations from fans, friends and followers are collected under his post. “Congratulations to you both. So beautiful”, writes for example Yeliz Koc, 28 years old. Serkan Yavuz, 29, who only became a father himself at the end of May, is also happy for the future parents.

“Bares for Rares XXL”: “That was a very proud prize!” Sky du Mont goes bankrupt for its antiques

Sky du Mont, 75, didn’t expect this: In Horst Lichters, 60, ZDF junk show “Bares for Rares XXL”, the actor had a secretary from antiques expert Detlev Kümmel, 54, on the June 22, 2022 show, inspect. A heirloom jewel from the year 1820, in oak with mahogany veneers, wooden ornaments and secret compartments was put to the test. The expert quickly recognized: “It was restored once. Not professional at all though. Poorly applied varnish that caused cracks to dry and damage in transit – the bad news for the prominent Sky du Mont owner didn’t end there. “Someone pushed it the wrong way,” Kümmel said, pointing to a piece of wood that had broken off. “That still needs to be improved,” he told the stunned TV star.

According to du Mont, the restoration cost 10,000 euros. “It was a very proud award,” said the expert. He estimated the current value at 3800 to 4400 euros. In the end, the prominent owner received much less. “It became 2,000 euros,” the ‘Shoe des Manitu’ actor told ‘Bild’ a day later. “For me, the sale of the secretary was very emotional. I grew up with it, my mother inherited it, it was in our house. I got it after she died. It has been in the basement for a few years because I didn’t have room for it. My kids didn’t want it either, so I decided to sell it.” But despite the shock of the scam, du Mont sticks to his original plan: the proceeds from the sale of the secretary will go to the war-torn people of Ukraine.More The actor wants to add 10,000 euros worth of his private vaults.

- Advertisement -
Share
Facebook
Twitter
Pinterest
WhatsApp
Previous articleCampfire, Niantic’s social network for video games, is making its debut at Pokémon GO Fest in Berlin
Next articleJordi Pujol: “I would put my hand in the fire for a large part of my family”