Olite revives the Middle Ages to settle in the future 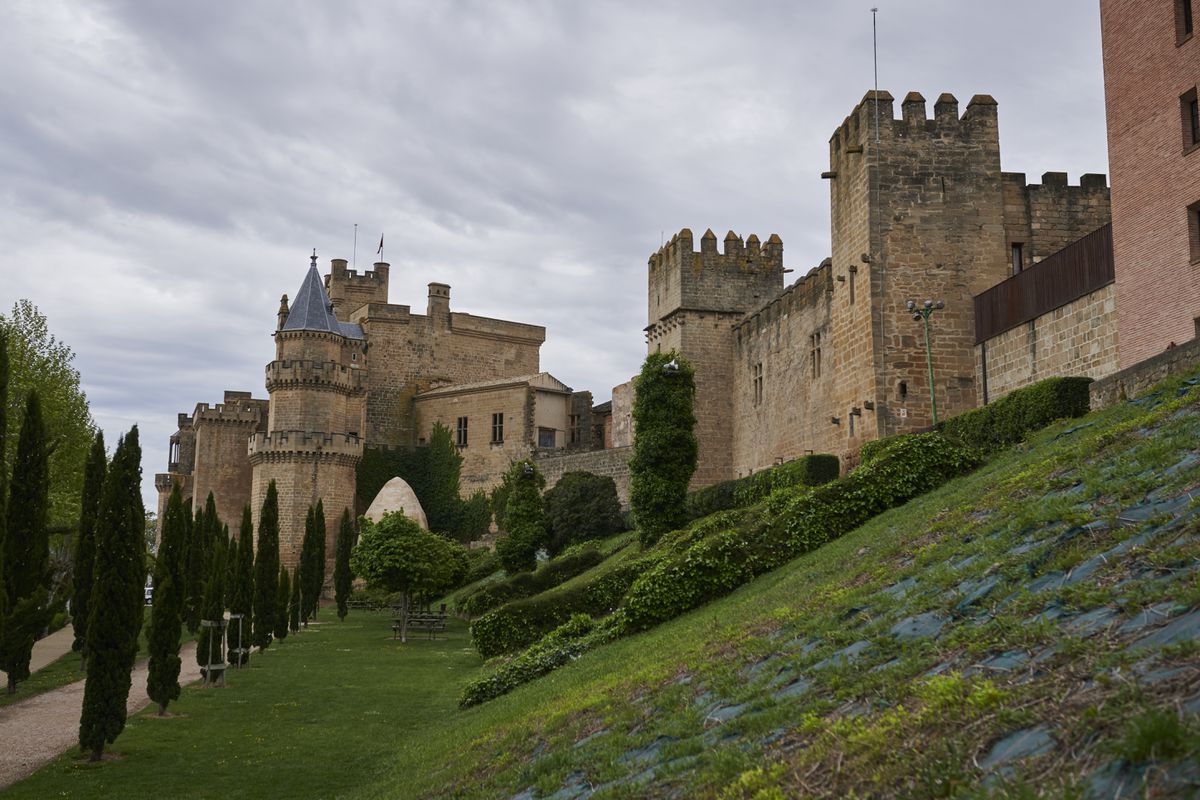 One is tempted to knock with one’s knuckles on the walls of the castle of Olite (Navarre). This 15th-century royal palace is so polished and well-preserved that it would not be surprising if the loudspeaker told visitors to leave the theme park at sunset. But not. It’s not a decoration. This monument, the most visited in the Autonomous Community, is located in the center of a very lively city that does not close. On the day the tourists leave, the neighbors stay, meaning the destination continues to attract new visitors who are always keen to live like the locals. Neighbors who organize the Olite Theater Festival and the Medieval Festivals in the summer. Who works in one of the eight wine cellars that can be visited in the city, in the orchard irrigated by the Canal de Navarra, in the boisterous bars of the Plaza de Carlos III or in the Parador, a 13th-century palace with the castle and of the Church of Santa María la Real show the power of the Kingdom of Navarre in the Middle Ages and the strength of a region, central Navarre, in the 21st century.

THE PARADOR AND ITS REGION

The castle (officially the Royal Palace of Olite) received 173,000 visitors in 2021, according to the company responsible for its tourism management, Guiarte. A number to which should be added the 3,998 inhabitants of Olite, because the castle belongs to everyone. Book presentations, theater performances, concerts take place here… The same happens in the Parador, which is inhabited by travelers and people who are here for life. Virginia Rull, director of the hotel for almost a decade, explains how the hotel opens up to people: “We provide the rooms for the music school, we receive visits from schools, we organize talks… Of course, weddings are celebrated”. Given the deep roots of the wine sector in Olite, at the beginning of May they organized the international Grenaches du Monde competition, which selects the best red wine in the world made from the Garnacha grape variety from among a thousand candidates.

The Parador, located in the square popularly known as this, is separated from the castle by the Church of Santa María la Real, which has a 13th-century polychrome portal and a Renaissance altarpiece inside. Javier Adot, one of Guiarte’s founding partners, sums up the value of the temple: “In itself, it would be a reason to visit Olite. But of course the shadow of the castle is very long.” Adot, a native of Tafalla, a town of 10,582 inhabitants 10 minutes from Olite, which had an impressive castle until the 19th century, explains why the one in Olite remained standing: “ It took a while to get permission to demolish it and improve the health of the city, as the walls were the focus of rats, fleas, and danger in general. A nobleman or mayor of that time, in the 19th century, complained. If the railway was built with the stones of Tafalla, today the economy of the region is founded with those of Olite.

Wine helps too. To speak and attract visitors. There are so many wineries and such knowledge that in Olite it is not enough to ask for a red wine, but to name the brand and the grape. The Navarre designation of origin is self-evident. Adriana Ochoa is one of the owners of Ochoa Organic Wineries. Together with his sister he inherited a business that was founded in 1845. They conduct visits to the winery and tastings, but they also have an area in the facilities where they can drink wine with sausages: “It’s a matter of downplaying the fact that people feel at home,” explains the oenologist who schooled in the tradition and purism of France and in the joy and heterodoxy of Australia. “I’m all for screw-capping and selling wine in 5- or 10-liter cases,” he says over a glass of Moscato, a low-proof marshmallow they produce that’s well known in the area. In the end, it consists of making a product with a proven history, wine, accessible to everyone. Don’t leave anyone behind.

THE RETURN TO THE MEDIEVAL

There is a bottle of wine with María Teresa Malvehy, 95, her daughter and her granddaughters in the Parador. They traveled from New Orleans in the southern United States to Barcelona to cross all of northern Spain to Santiago de Compostela. After the Parador de Olite, go to the one in Santillana del Mar in Cantabria. Malvehy was born in Catalonia but grew up in Colombia and eventually emigrated to the United States. “Everything there is big and modern. In Spain things are small and different,” he compares. Olite Castle is very big but not as big as a mall. It’s so well preserved that it looks like a new creation, but it’s 500 years younger than one Shopping mall. Of course, there is a square in New Orleans adorned with Talavera de la Reina ceramic slabs, made in the 19th century in the workshop of Ruiz de Luna, the most famous potter.

Handicrafts Claudia Molina sells in El Txoko, her shop in the old town. It crafts pieces for the Carnival, another highly celebrated event in Navarre. Born in Chile, Molina assures that 49 nationalities live in Olite. It has promoted gastronomic days in pursuit of integration. After the hiatus of those last two years, he hopes to get her back in 2023. “You never miss a party in Navarre,” says Rull, the director. They almost coincide with the arrival of good weather. To the medieval ones mentioned we must add that of the patron saint, the Virgin of Cholera, and later that of the harvest. In between, the theater festival, previously focused only on classical works, bringing together actors such as Carmen Machi, Concha Velasco or Pepe Viyuela in the streets of the city, a source of pride for its neighbors. It takes place near the castle and brought together 4,106 visitors last year, as many as there are neighbors in the city.

Olite smacks visitors with nearby Ujué, a town of a hundred people a 20-minute drive away. Built on a 850 meter high rocky outcrop, it is dominated by the fortified church of Santa María de Ujué, which houses a Romanesque carving in alder wood and lined with silver. In the lower part of the city, for before or after visiting the temple and narrow streets, there is a bar and workshop Urrutia. A 60-year-old couple has been running it for two decades when they decided to leave another nearby town in the region and settle in Ujué. Today they call it entrepreneurship. It used to be about dedicating yourself to what you can do and doing it well. When they arrived there was a dump next to the ship that was converted into a bar and shop selling bread, sweets and shepherd’s crumbs – made with garlic, bacon, mushrooms, tomatoes and lard – and other dishes made with locally sourced produce manufacture. Today the mountain is clean and there are animals, everything a rural environment needs. “We don’t open plastic bags to make a salad. My husband buys the goods from local producers,” describes Juana Rosaura, who takes care of the public. José Manuel Urrutia gets up at 3 a.m. to bake bread.

THREE DEPARTURES WITHOUT LEAVING THE REGION

They are so confident in their business model that they have promoted the Navarra Artisan Food award, an octagonal seal with Basque typography that recognizes the products of twenty companies located in rural areas of the Autonomous Community. There are asparagus, chocolates, jams, sausages, oils… An alternative to fridge magnets. “The biggest problem you have in Ujué is the quiet. There are people who can’t stand it,” he says. His daughter lives in Malaga. Rosaura regrets there may not be a replacement when they retire.

On the field there at the moment. Xabier Unzué, 30 years old, has completed three vocational training modules aimed at living in a rural environment. It has chickens, bees, cows and olive trees. It’s powered by Virtual Shepherd, a mobile app that lets you create an imaginary fence so you don’t have to be with the animals in person. An acoustic signal warns the cows when crossing the border. It’s not that he doesn’t like being with them, it’s that he gets to choose when. Rosaura and Urrutia love being with their clients to live in Ujué: “Cultural and children’s activities, artistic initiatives are organized,” says Rosaura, referring to the courses on history and observations organized by the Public University of Navarra (UPNA). Stars managed by the Planetarium and the Astronavarre Society. Ujué, like Olite, have their own lives. They are not decoration.