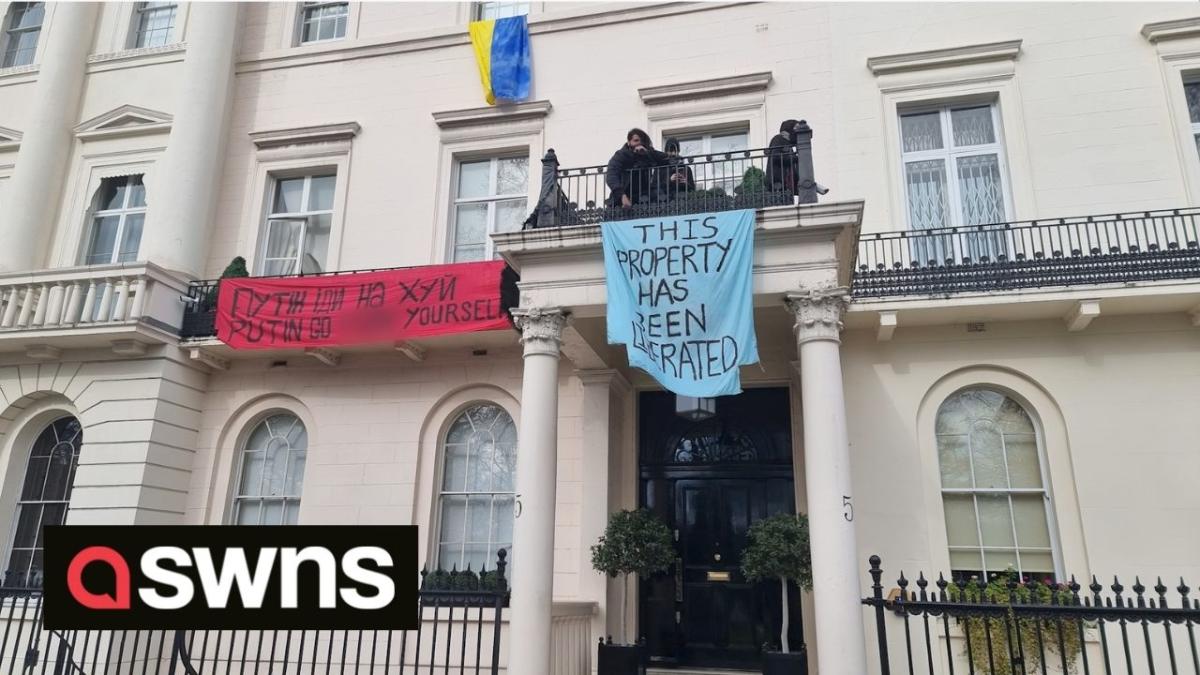 An oligarch’s £5m mansion in central London has been occupied by squatters waving a Ukrainian flag and anti-Putin banners from the windows.

The palatial estate in exclusive Belgravia belongs to the family of Oleg Deripaska, one of seven oligarchs sanctioned by the UK government last week.

Activists stormed 5 Belgrave Square in the early hours of this morning. [mon] before hanging Ukrainian flags and banners.

One banner read “Property has been released” while another read “Putin fuck you.”

The group occupying the property calls itself the London Makhnovists, after the Ukrainian anarchist Nestor Makhno.

They swore not to leave until the war was over.

Makhno was the commander of the Ukrainian Revolutionary Insurgent Army.

One of the squatters, who appeared to be in his early 20s, said: “There was no forced entry. We are using our human rights to protest.”

“We are here to protest the property of a Russian oligarch and a warmonger.

“This government is not only acting illegally, it is acting immorally.

“This property belongs to Ukrainian refugees.”

Another man said: “We plan to stay until Putin stops the war.

“Putin is responsible for people losing their homes and land. Sanctions are not enough.

“The government has delayed action, they are playing.”

Belgrave Square houses several embassies. Number 5 was once the home of Sir George Murray, the British Secretary of State for War and the Colonies until he died there in 1846, and later housed the Institute of Directors.

A Twitter account called Resist London said: “The squatters are using a version of the Section 6 notice known as the ‘protest defence’, in which they do not intend to live and sleep on the property, but instead occupy it. as a protest. , in rotation.

“This is due to the 2012 law change on residential property.”

A Met Police spokesman said: ‘Police were called shortly after 1am on Monday to a residential property in Belgrave Square.

“Officers attended and discovered that several people had entered and hung banners from the windows upstairs. Officers remain at the scene.

- Advertisement -
Share
Facebook
Twitter
Pinterest
WhatsApp
Previous articleWho is Seiya Suzuki and why is he one of the most interesting free agents in the MLB?
Next articleCorona: What is the compulsory vaccination in nursing homes and nursing homes for? – Politics