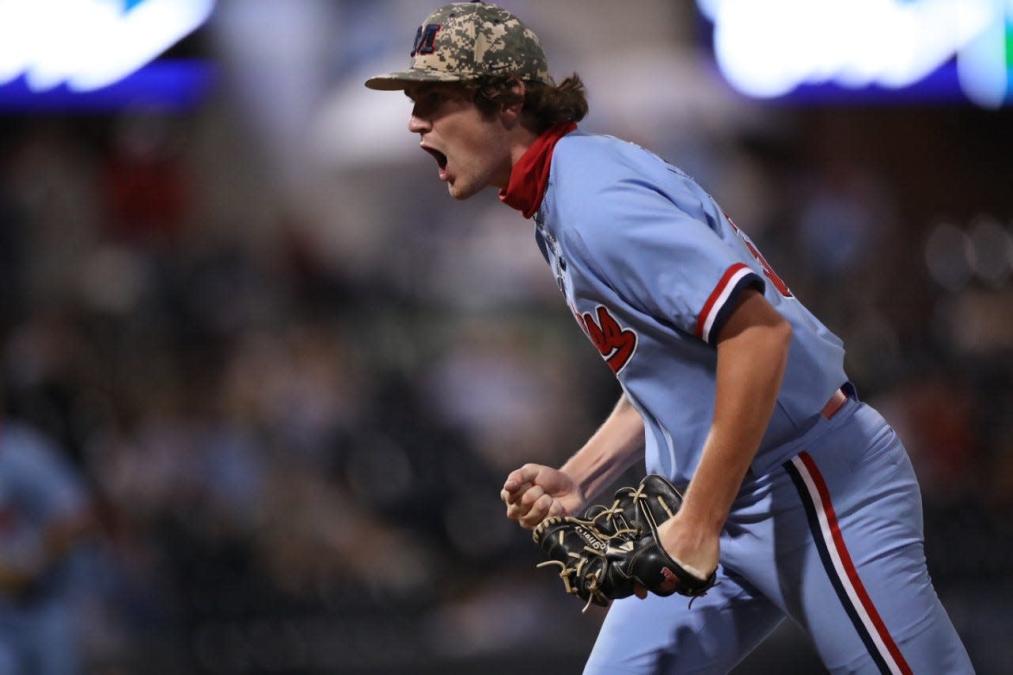 OXFORD — The Tennessee Vols have made it clear beyond question that they are better at baseball than Ole Miss.

The Rebels, who entered this weekend ranked No. 1 on D1Baseball and Baseball America, lost 10-3 to Tennessee at home on Saturday night. One night after losing to the Vols 12-1, Ole Miss (16-6, 2-3 SEC) recorded just five hits and allowed eight runs in the first five innings.

Tennessee (22-1, 5-0) starter Chase Dollander picked up where Friday’s starter Chase Burns left off. He pitched 6 1/3 shutout innings and was in attack mode the entire time. He only walked one batter and allowed three hits with 10 strikeouts. Of the 100 pitches he threw, 80 were for strikes.

KIFFIN THE TROLL: Lane Kiffin throws a golf ball for the first pitch before baseball Tennessee vs. ole miss

OVERRATED?: Did Ole Miss baseball justify the No. 1 ranking with the SEC series win at Auburn?

For the second night in a row, senior first baseman Tim Elko broke Tennessee’s shutout with a home run in the final inning, receiving a 100 mph pitch from rookie flamethrower Ben Joyce over the center field fence for two runs in the eighth inning.

Ole Miss came into this series averaging more than nine runs per game. The Rebels have only eight hits and two walks in two games against the Tennessee pitchers. Vols pitchers have tortured Ole Miss hitters with high-velocity fastballs, causing the Rebels to fall behind in the count and post 23 strikeouts in two games.

Second-year right-hander Jack Dougherty allowed six runs on eight hits in 3 2/3 innings. His stat line looks a little worse than his performance actually was, as he was stung by two infield singles and a bloop that fell into the shallow outfield. He struck out five with no walks and, more importantly, didn’t allow a home run one night after the Rebels’ pitching had allowed five.

Ole Miss hasn’t been swept in a series since losing three straight to Mississippi State at Oxford in 2019.

Game 3 of the series begins Sunday at 1:30 pm at Swayze Field.