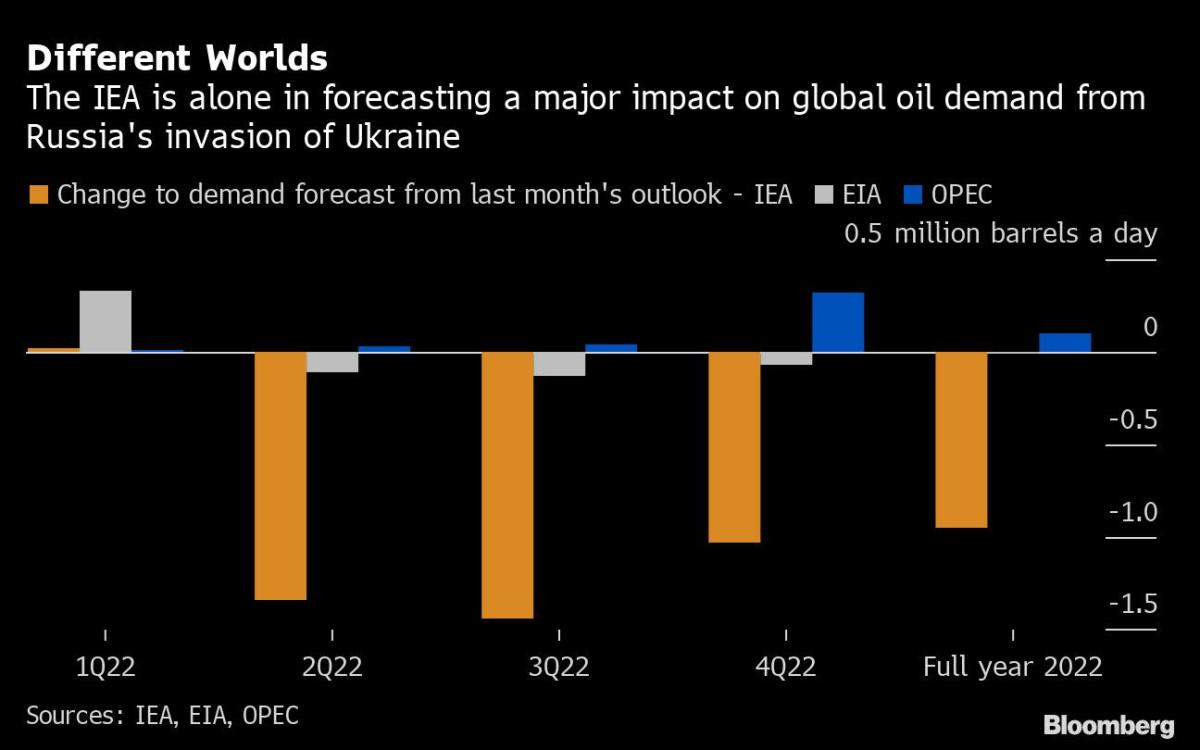 (Bloomberg) — Looking at the latest forecasts from the three major oil agencies, it seems like they live in different worlds.

Monthly perspectives from OPEC, the International Energy Agency (IEA) and the US Energy Information Administration (EIA) paint starkly different pictures of the impact of the war in Ukraine. Reading the OPEC report, it is not easy to detect that there is a war going on. The word “invasion” does not appear at all in the 90-page document, and “war” only once. His favorite description is “Ukrainian crisis.”

The group’s unwillingness to address the escalation of disruption that could result from Russia’s aggression may be due to the years of work OPEC put into cultivating relations with Moscow, persuading Russia to participate in production cuts within of the OPEC+ group. But he leaves his oil market forecast off the mark.

While OPEC analysts acknowledged that the effects of the war — if they continue — will have a negative impact on economic activity in 2022, they actually revised their oil demand forecast for the year slightly upwards compared to with the February forecast.

The EIA also didn’t significantly downgrade its oil demand forecast, though it notes in its report that consumption estimates are based on economic forecasts that were completed before the invasion took place and that the outlook “will depend on how economic activity responds.” and travel to recent and potential future events and sanctions.”

The IEA, in stark contrast, sees a high and almost immediate impact on oil demand from a combination of sanctions and high oil prices and their effect on overall inflation. It cut its 2022 demand forecast by 950,000 barrels per day, with the greatest degree of influence being felt in the second and third quarters of the year. The Paris-based agency expects higher prices to cut demand by 400,000 barrels a day, with the rest coming from a slowdown in economic activity.

It cut its forecast for Russian oil demand this year by 435,000 barrels a day, due to a sharp drop in GDP and disruptions in the aviation industry, which have caused most international flights from the country to be canceled. Prospects for other large oil consumers are low and around 1%.

There are also marked differences in prospects on the supply side.

Once again, OPEC did not incorporate any impact from the invasion into its forecast. Contrast that with the IEA, which cut its global oil supply forecast for the rest of 2022 by 2.8 million barrels per day. It sees Russian production down by as much as 3 million barrels a day from April, “as a drop in domestic demand is combined with an ever-increasing customer-driven voluntary embargo, while sanctions drive away more buyers.”

With the exception of one or two Russian refiners cutting crude deliveries, there is little immediate sign of the big decline in output predicted by the IEA, even though major oil companies and refiners self-sanction Russia’s oil exports. Continuing shipments at Russian export terminals, at least for now.

Russia pounding in Ukraine may not disrupt oil supply; deep discounts and a tight market may be enough to keep Russian barrels flowing, even if they have to be shipped further afield to find prospective buyers. And the uncertainties are enormous, as the three agencies point out. But crude prices above $100 a barrel, runaway inflation and restricted economic activity in Russia will likely have an impact on demand, something all agencies will reflect in subsequent analyses.