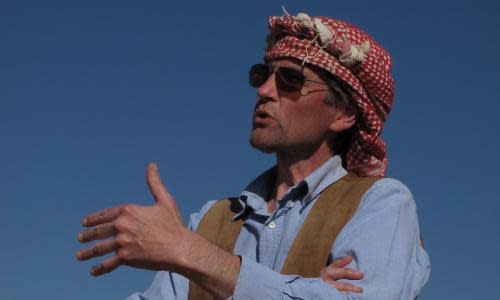 Neil Faulkner, who died at age 64 of lymphoma, was an archaeologist and writer, the editor of Military History Matters, and a political activist. He described his pioneering archaeological work, the Great Arab Revolt Project (Garp) in southern Jordan and the Sedgeford Historical and Archaeological Research Project (Sharp) in Norfolk as “fundamental truth”.

Faulkner founded Sharp in 1996 as an exercise in “democratic archaeology,” in which everyone involved, from professional experts to amateur volunteers, worked together. The project, based in the village of Sedgeford in northwest Norfolk, initially focused on the remains of the Anglo-Saxon settlement, but excavations have expanded and the entire history of the parish from Mesolithic times to the First World War is being investigated.

The most important discovery has been a large malt-processing complex, with evidence of at least three grain-drying kilns and associated features from around AD 800 as well as an Iron Age hoard of 32 Gallobelgian gold coins E known as ‘staters’, was found buried in a cow bone in 2003. This community fieldwork in Sedgeford is now one of the largest independent archaeological projects in Britain, and has provided training and research opportunities for thousands of archaeologists in training since its creation.

Garp was a cutting-edge modern conflict archaeology, a 10-year project co-led with Nicholas Saunders of the University of Bristol, investigating the Arab revolt against the Turks during the First World War.

Faulkner admired TE Lawrence’s mischievous, precocious figure and his brilliance as a military commander and writer, and lamented that the British mythmaking machine had turned Lawrence of Arabia into “a metaphor for the imperialism that tore the region apart a century ago.” .

He empathized with Lawrence’s shattered psyche after the Sykes-Picot deal that divided the Middle East after World War I and betrayed everything the Arabs had fought for. He also admired Lawrence’s ability to unite previously warring desert clans into a unified fighting machine, and saw in this an analogy to the warring tribes of today’s sectarian left, who would rather bicker than face a common enemy. .

Lawrence was a liminal character, moving between spaces and cultures. For him, the tribes were a vapor “that moved without front or back” that could overcome the “rooting of a permanent army”. Faulkner, who knew and understood the importance of landscape, terrain, and military strategy, pointed out that Lawrence’s famous war memoir, The Seven Pillars of Wisdom, was studied by the Vietcong, the Taliban, and even the US military.

I remember working with Faulkner and his team in Jordan, excavating Ottoman tent rings, stone circles that had weighed down soldiers’ tents in 1917: child soldiers known as Mehmetçiks, little Mehmets, the British Army’s equivalent of Tommys, recruited for a war. not its manufacture. Scraping the sand and dirt revealed the detritus of the men who lived together: bits of playing cards, tunic buttons, leather boots, cigarette packets, oil lamps. For Faulkner, archeology was about people, no matter which side they were on. He drew on his field research for his 2016 book Lawrence of Arabia’s War: The Arabs, the British and the Remaking of the Middle East in WW1.

Archeology and writing were integral to her life as an activist. For Faulkner, theory and knowledge were of little use without practice, and he was a committed revolutionary socialist. His articulated clarity, whether at one of the Brick Lane Debates, which he staged in the East End of London (believing that face-to-face debate and discussion was more motivating and transformative), or any of the other meetings he who directed, could his political game. He was passionate but not messianic: a mentor and inspiration to many young activists. Faulkner used his knowledge and authority lightly, listening and encouraging others.

In 2020 he was part of the coordinating committee of Resistencia Anticapitalista: its mission statement is “revolutionary transformation to face the crisis composed of ecological disaster, economic collapse, social decay, grotesque inequality, massive impoverishment, increasing militarization and creeping authoritarianism.” .

Faulkner was also an accomplished broadcaster, notably appearing on the BBC’s Timewatch, Channel 4’s Time Team and the recent series of YouTube shows, The History Fix, for Housmans Bookstore. This was based on his 2018 book A Radical History of the World, published by the new Left Book Club in their series of radical books sent to their members. Faulkner, along with others, was instrumental in reestablishing the LBC, originally created in the 1930s by Victor Gollancz, and now run by Pluto Books.

As a supporter of the Stop the War coalition and a defender of the political pamphlet tradition and its place in activism, Faulkner, at the time of the centenary of the First World War, launched the pamphlet No Glory: The Real History of the First World. War, considering the conflict as “a war of the rich in which 15 million poor people died”.

His writing is beautifully accessible, like at the beginning of No Glory: “The last veteran in the trenches is dead. This is lucky for our rulers. If he were still alive, Harry Patch’s voice would be heard denouncing his jingoism and warmongering as he entered the centenary of the First World War… He told Tony Blair to his face that ‘war is murder’ organized'”.

Faulkner studied the state mechanics and the human psychology of war, to understand how war is constructed, the class basis of war, as well as its inverse, revolution.

Born in Walthamstow, northeast London, raised in the Weald of Kent, and educated at the Skinners’ school in Tunbridge Wells and at King’s College, Cambridge, where he studied social and political science. He taught history and sociology at Fullbrook School in north-west Surrey from 1984 to 1988 and then was head of sociology at Frances Bardsley School, Romford, east London for two years before retraining as an archaeologist at the Institute of Archeology from University College. London, where he was a co-winner of the Petrie Prize. He lived in St. Albans, Hertfordshire.

He is survived by his partner, Lucy, his three children, Tiggy, Rowena, and Finnian, his sister, Maura, and his mother, Mary.