Nothing goes right for the Lakers, again, as they fall to the Timberwolves 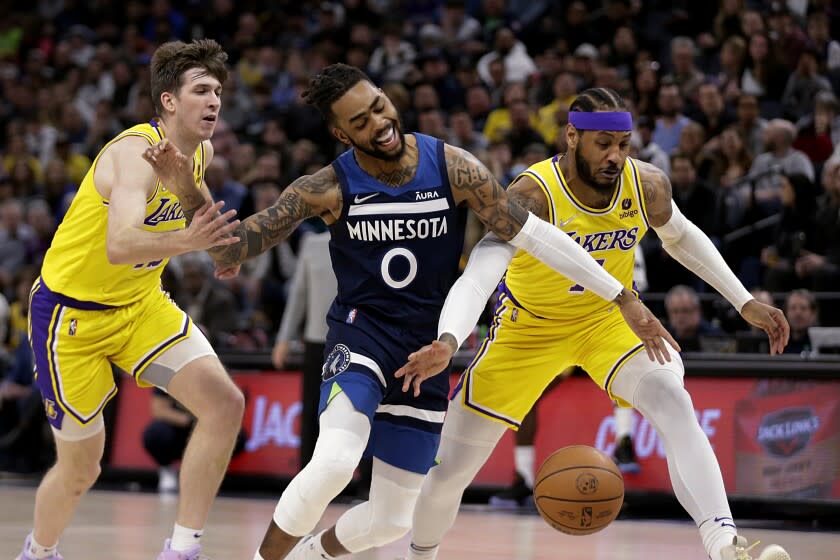 And somehow they can’t even find bottom.

Someday, they will run out of fight. Someday, they won’t find the rope. One day these games will be just as embarrassing as they were in the beginning.

After awful first quarters against the Phoenix Suns and Toronto Raptors, the Lakers were somehow just as bad Wednesday at Minnesota.

They missed just about everything that wasn’t right at the rim, all 10 of their 3-pointers failing to get through the basket to open the game. They waved their hands and hung their heads as a younger, hungrier and more athletic team highlighted all the things the Lakers are not.

Minnesota led by as much as 25…but the Lakers didn’t give up. The team cut that lead to four before falling apart late, tired and frustrated, in a 124-104 loss to the Timberwolves.

It’s not saying much to ask a team to do the easiest and most important task: compete, but beneath this season’s crippling disappointment, there’s a foolish optimism in the way the Lakers continue to rise.

It’s emblematic of what this season has been: mere moments of positivity surrounded by intractable problems.

After DJ Augustin snuck into the baseline to make the score 89-85, the Timberwolves outscored the Lakers 25-10 before Frank Vogel luckily took LeBron James out of the game.

Second-year shooting guard Anthony Edwards carried the Timberwolves in the first half as center Karl-Anthony Towns struggled with foul trouble, and Towns howled and flexed late as he pulled the Lakers away — the big man too big, too strong and too skilled for the interior of the Lakers.

Towns scored 16 in the fourth to freeze the game, waving to the Lakers’ bench as he left the game before the buzzer.

It’s the Lakers’ 11th straight road loss this season and third in a row. Since the All-Star break, they are 2-9.