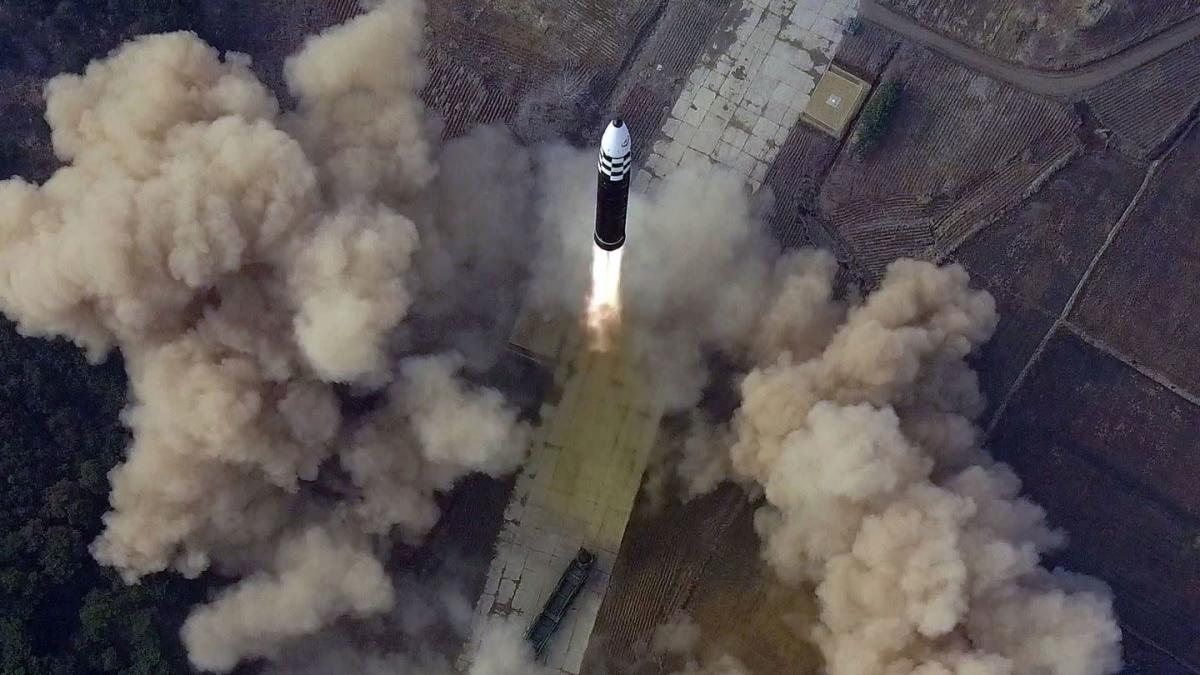 The leadership in Pyongyang has announced that the new missile can be used reliably in the event of war. The threat is primarily directed at the United States.

Seoul – North Korea says it has successfully tested a new type of nuclear-capable ICBM that can reach the United States.

Ruler Kim Jong Un himself oversaw the final phase of preparation for the launch of a Hwasongpho-17 intercontinental ballistic missile on Thursday and gave the launch order, state-controlled media reported on Friday. The test was able to demonstrate “the reliability of its immediate use in conditions of war”. Information cannot be independently verified.

“Ready for confrontation with the American imperialists”

The resolutions prohibit North Korea from testing ICBMs and other ballistic missiles. Such missiles are usually ground-to-ground missiles which, depending on their design, can also carry a nuclear warhead. According to its own website, the UN Security Council wants to deal with North Korea in New York on Friday.

North Korean media described the new weapons system as “the central means of attack for the strategic armed forces of the People’s Republic and a reliable means of deterring nuclear war.” The United States was accused of making a nuclear threat to North Korea. Kim was quoted as saying that his country was “fully prepared for a long-term confrontation with the US imperialists.”

US talks with North Korea over its nuclear weapons program have been stalled for more than three years. Therefore, experts assume that Pyongyang could also try to increase the pressure on Washington with its latest missile tests. The country had already conducted several missile tests this year.

The US government also strongly condemned North Korea’s latest intercontinental ballistic missile test, but stressed that the door to dialogue was still open. However, North Korea must immediately stop its destabilizing activities. Japan’s Defense Minister Nobuo Kishi spoke of a “serious threat with a different dimension than before”. The test represents a serious threat to the peace and stability of Japan and the international community.

US Secretary of State Antony Blinken and his South Korean counterpart Chung Eui Yong called for a strong response, according to the State Department in Seoul. Additional measures by the UN Security Council are absolutely necessary in this context. According to the information, Chung and his Japanese colleague Yoshimasa Hayashi made similar statements in a phone call. North Korea is subject to harsh international sanctions due to its nuclear weapons program.

Rocket rises to more than 6000 meters

According to North Korean media, the “Hwasongpho-17” was launched at Pyongyang International Airport, reached a height of up to more than 6,200 kilometers after a vertical ascent, and hit the intended target in the Sea of ​​Japan (Korean: East Sea). ) 1,090 kilometers from the launch point. The information roughly corresponded to that of the South Korean military the day before. It was the largest test of an ICBM by North Korea to date. ICBMs include missiles that can fly more than 5,500 kilometers.

North Korea had already conducted three ICBM tests in 2017. After testing an intercontinental ballistic missile known as the Hwasong-15 in November of that year, the leadership in Pyongyang had state media announce that the country was now in a position to attack everything. the continental United States with nuclear warheads. Experts doubted that North Korea was technically capable of doing this at the time.