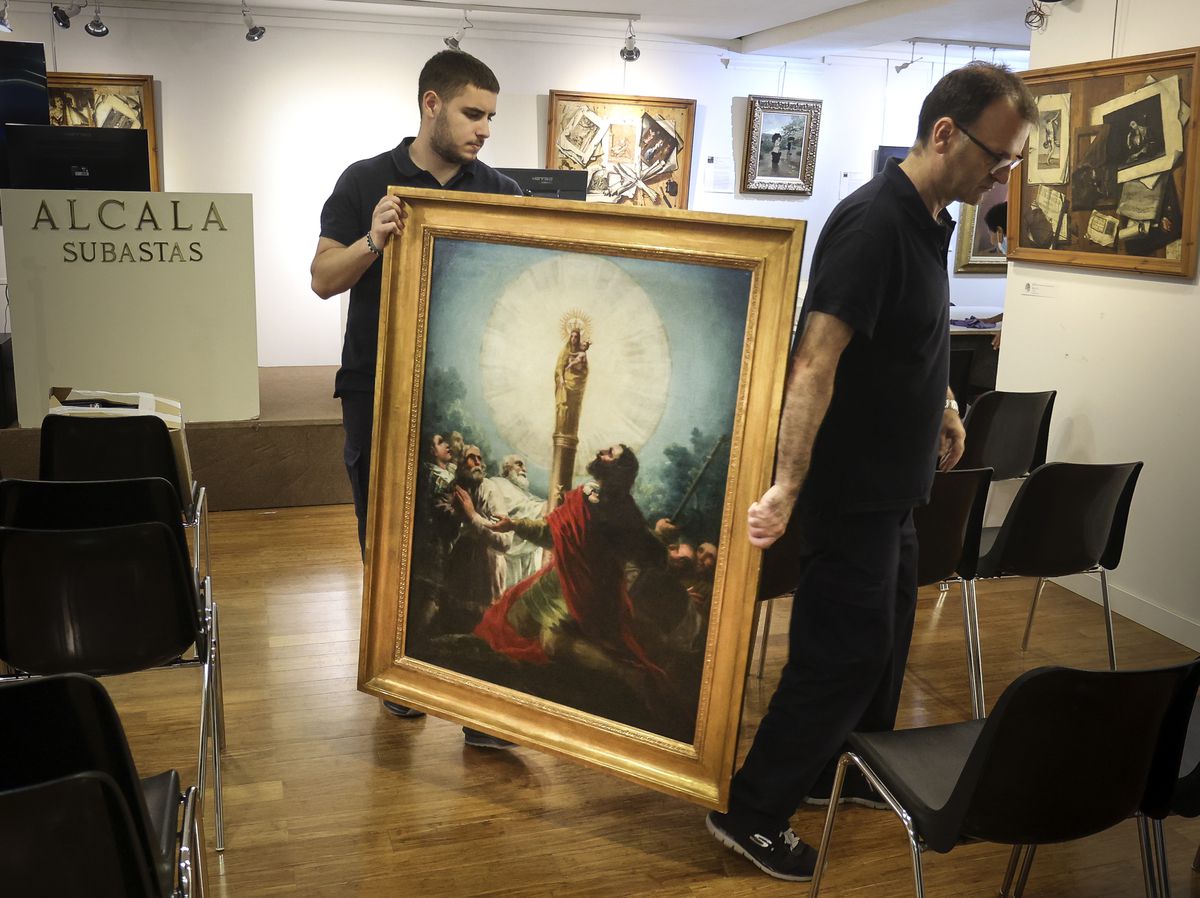 The auction started somewhat decaffeinated with lots that initially attracted little interest: cruets, glass carafes from the 18th century, ceramic plates or silver cutlery for 6,000 euros… from curtain rods to leather hat boxes, with something from the bazaar or Chinese luxury shop, the auctioneer , holding the gavel aside, imposed silence at the prestigious Alcalá Subastas hall in the heart of Madrid. “Now this wonderful painting by Francisco de Goya and shiny ones that I have behind my back will be auctioned.” And he added: “First of all, the work is not exportable and has been declared a Site of Cultural Interest (BIC). The bidding begins. The starting price is two million euros. started. Here we go. Suddenly the silence becomes even clearer. Nobody raises their hand with the plastic pallet in the room. No one calls to bid. No one is typing on the web anywhere in the world to offer themselves. The auctioneer raises the gavel. “No one’s excited?” he asks, somewhat forced. Wait a few minutes. But nothing. Nobody seems to want that goya, Appearance of the Virgen del Pilar to the Apostle Santiago and his disciples.

According to experts, it dates back to 1775. By that time, Goya, who was 29 at the time, was already becoming well-known in Madrid. In that very year, Anton Rafael Mengs, Carlos III’s first chamber painter, summoned him to court and commissioned the boxes for the tapestries that were to decorate a royal dining room at El Escorial. The auctioned work depicts the Virgen del Pilar before a great supernatural halo, surrounded by the Apostle Santiago and his disciples. It is probably a commission for an oratorio. All the figures contemplating the Virgin, all men, have beards and are said to be wearing ancient robes of cloaks and tunics. But in the left-hand corner one can be seen in profile, dressed in 17th-century fashion and without a beard. Some experts wanted to see a warning, a hint in the wink of the clothing: the figure in profile belongs to the young Goya, who always liked to portray himself in his works. But it is not certain.

The minutes pass. Nobody lifts a finger. The people on the phone look at the auctioneer and shake their heads. There is no one to help on the internet either. The auctioneer takes a last look at the crowded hall and repeats the starting price “two million, two million…” as if to cheer the audience up. But nothing. Nothing happens. The auctioneer raises his hand one last time and hits the hammer. It’s over. Nobody bid. So that the seller doesn’t go away empty-handed, the last chance remains: that the representative of the state, in this case a woman who was sitting in the front row, makes use of her right of first refusal and claims the painting for the two million.

Throughout the auction, this culture ministry official, an art expert, did it twice. The first was for an 18th-century fan that started at €1,800 and that no one wanted. The officer raised her trowel and the state acquired her. The second was for a wonderful collection of four paintings of the so-called trompe-l’oeil by the 18th-century artist Francisco Gallardo. They came out at a price of 90,000 euros. A collector wanted to buy it at this price. After the bid was accepted, the official raised her hand with the trowel and exercised the right of first refusal: the state can by law purchase any auction item at the final price.

That’s why nobody wanted that goya, All eyes turned to the officer. But she didn’t raise her arm either. The state doesn’t want that either Appearance of the Virgen del Pilar to the Apostle Santiago and his disciples. Why? “It’s not that I don’t want it. The fact is that no museum asked us to purchase it. It depends on the occasion, the price, the representativeness of the work, whether it fills a gap in the collection of a particular state museum, many factors come into play,” said Pilar Corchado, the culture ministry official who traveled to the auction. They, the members of the ministry who take part in these files, only play the role of intermediaries between the various national museums that transmit their lot requests and the auctioneers. And no museum had contacted them to purchase them goya.

The auction naturally lost interest. Someone has left the room. The representative of the state, among others. The painting behind the auctioneer still distilled an overwhelming luminosity that could be appreciated much better when viewed from about ten meters away. But after bidding, it seemed a little less luminous or radiant. question of winning or losing.

It’s not the first time the Alcalá Subastas auction house has offered one goya. In 2003, during a routine appraisal in Madrid, one of the company’s founding partners, an expert in old paintings, became interested in a painting that the homeowner had hanging in the hallway and to which he attached little importance. “In that moment, my partner knew it was one goyarecalls Rogelio Folguerias, President of Alcalá Auctions. The owner of the house had no idea of ​​the author or the date because the painting lacked a signature, which was very common for Goya. The frame, yes, was from the 19th century. But he didn’t know much more. added. “The only thing is, there’s another one like it in the bedroom.” The professional ran into the apartment’s bedroom with another guess that turned out to be true: the painting was in fact in the bedroom – he knew it right away, too, without a shadow of a doubt – another goja. Months later they were auctioned off, conveniently authenticated by specialists from the Prado Museum, as were two goyas, graduates Holy Family Y Tobias and the angel. This time the state bought them for 1.7 million euros each. Now they hang in the Prado Museum. This opportunity was initially wasted by the Appearance of the Virgen del Pilar to the Apostle Santiago and his disciples.