“No to war”: Russian Vera Zvonareva sends a message at the Miami Open 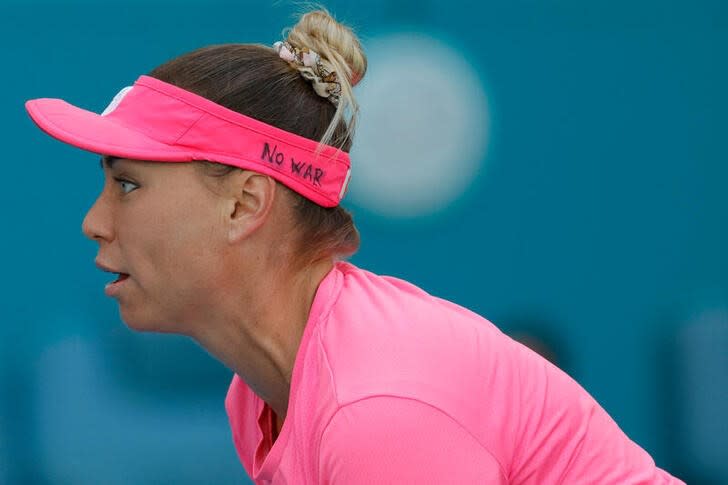 March 26 (Reuters) – Russian tennis player Vera Zvonareva sent a message of peace during her 6-1, 6-4 third-round loss to American Danielle Collins at the Miami Open on Saturday, wearing a visor with the words “No to war” scrawled on the side.

The gesture comes after Russia’s invasion of Ukraine, which began on February 24, in the biggest assault on a European state since 1945. The Russian incursion has sparked outrage and sweeping sanctions from the United States and its allies.

Zvonareva was part of a Russian podium finish in women’s singles at the 2008 Olympics, where she took bronze. A two-time Grand Slam finalist, the 37-year-old is currently ranked 117th.

Russian Daniil Medvedev and Belarusian Aryna Sabalenka sued for peace at Indian Wells earlier this month. Belarus has served as a staging ground for the invasion.

The tennis authorities banned Russia and Belarus from participating in international team competitions after the invasion. Players from Russia and Belarus can compete on the tour, but not under the name or flag of their countries.

Collins, an Australian Open finalist, advances on Saturday despite neck pain affecting her play in the second set, where she twice sought help from a physical therapist.

(Reporting by Amy Tennery in New York. Editing in Spanish by Marion Giraldo)