No experiments with our security: YES to Frontex – YES to Schengen 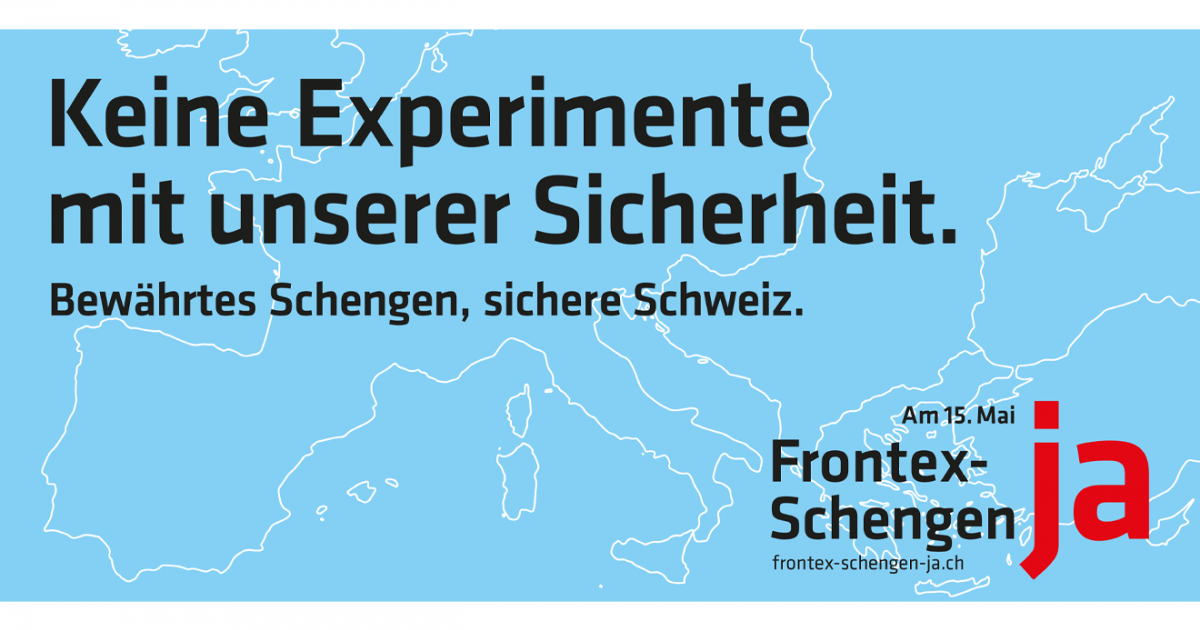 On May 15, 2022, Switzerland will vote on increasing its contribution to the European border protection agency Frontex. Frontex coordinates the surveillance of the external borders of the Schengen area, which also includes Switzerland. Therefore, our country must make its contribution and assume its responsibility.

YES to stay in Schengen/Dublin

In 2005, the Swiss electorate came out clearly in favor of the Schengen/Dublin agreement. Since then, Switzerland’s approval of Schengen membership has been confirmed in several votes. Participation in Frontex to control the common external borders is also part of the Schengen Agreement. As a Schengen member, Switzerland is committed to supporting further developments of the Schengen acquis in solidarity. Otherwise, the Schengen Agreement will automatically expire within six months. The loss of the agreement would have far-reaching negative consequences for our security, our relations with the European Union, our freedom to travel in Europe and for our economy, especially tourism. With the abolition of the Schengen Agreement, the Dublin Convention, which is legally bound to it, would also become obsolete. Regulates cross-border cooperation in the asylum system. Without Dublin, for example, Switzerland would be the only Schengen country where asylum seekers could apply for a second visa.

Opportunity to rejoin forces with the EU

Since negotiations on the framework agreement broke down, Swiss European policy has reached a dead end. As a result, the bilateral relationship between Switzerland and the EU is suffering. The negative consequences of the erosion of bilateral agreements are already evident: Switzerland, for example, is largely excluded from the European research framework program “Horizon Europe”. There are also problems in the area of ​​Swiss medical products: they are no longer recognized as equivalent in the EU. The rejection of Switzerland’s participation in the expansion of Frontex would further aggravate the situation. At a time when European countries are drawing closer due to the war in Ukraine, such a confrontation sends an even more wrong signal.

Safe Switzerland, also thanks to police cooperation in the Schengen area

The Schengen Agreement created a common security area in which police forces from all countries work closely together across borders. Since joining Schengen, Swiss security authorities have also had direct access to the Schengen Information System (SIS II) and the Visa Information System (VIS). If Switzerland ceases to be a member of Schengen, it will lose access to these important searchable databases, just like the UK after Brexit. Our security agencies would be blinded.

As a Schengen member, Switzerland has the right of co-determination in Frontex and is a member of its management board. In this way, you can actively work to improve the work of the European border protection agency and ensure that fundamental rights are respected at the external borders. As a Schengen member, Switzerland can also directly influence the legal framework of Frontex. The new Frontex regulation also expands the protection and surveillance systems: training courses for sea or land border guards, there is now a Fundamental Rights Officer (FRO) and 40 independent fundamental rights monitors monitor the implementation of the obligations of fundamental rights of Frontex. With a no, on the other hand, he does not accept his responsibility. It stands on the sidelines, and that doesn’t help anyone, especially since Frontex will continue to exist without Switzerland.

Strengthen the freedom to travel in Europe and tourism in Switzerland

Without Schengen, Switzerland will become a visa island, because tourists from major long-distance markets outside Europe will now need a separate visa for Switzerland. Studies put the resulting annual loss to the lodging and tourism industry at more than 500 million Swiss francs. In addition, there are border controls, which would have to be reintroduced because Switzerland would once again be the EU’s external border. Traffic jams at customs and queues at airports could hardly be avoided. For tourism businesses, this means the latent risk of bottlenecks or delivery delays. For guests and us, this means travel bureaucracy instead of freedom to travel. Finally, Schengen allows us to travel for free and without complications throughout Europe.