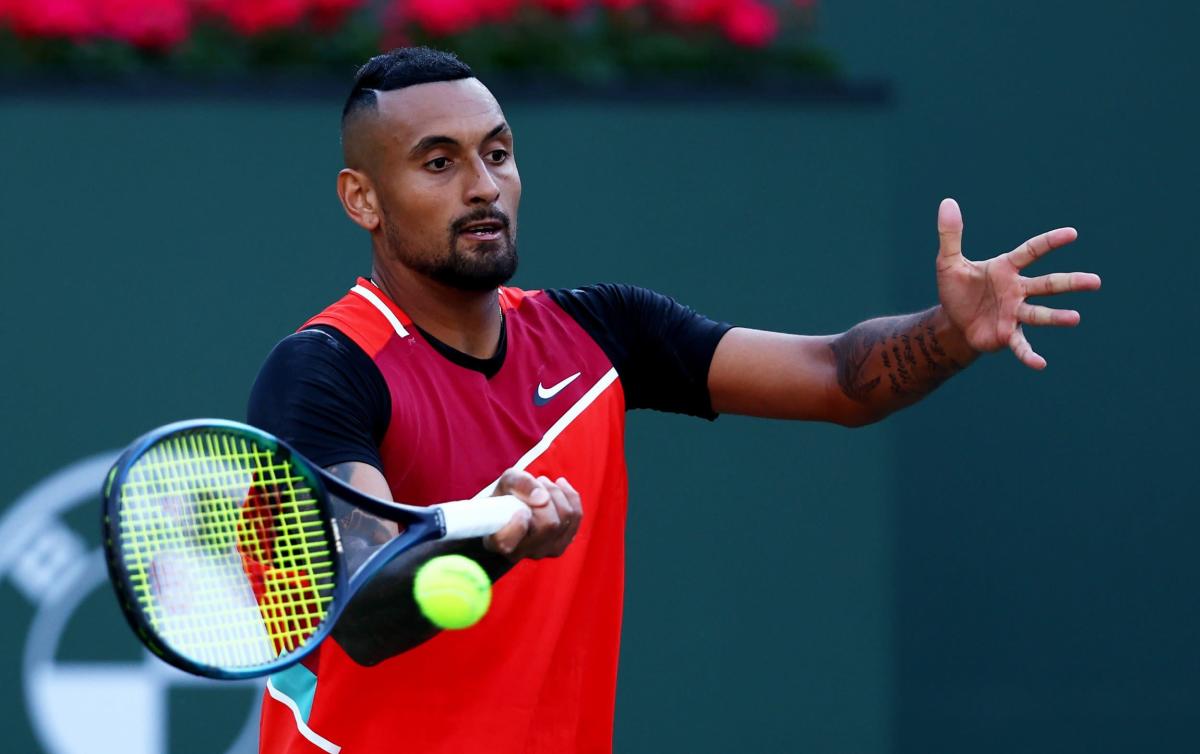 Nick Kyrgios received a verbal obscenity penalty point when he fell to a narrow three-set loss at the hands of this season’s Mr. Invincible: Rafael Nadal.

In a typically fierce match that brought the Indian Wells crowd to the brink of hysteria, Kyrgios broke a racket when he failed to break serve in the eleventh game.

That earned him a first warning from the Code of Conduct. Then, when Kyrgios started to swear 0-6 in the first set tie-break, referee Carlos Bernardes awarded him a penalty point, thus ending the set without further ado.

In truth, Kyrgios was lucky to get away with it without further censorship. A game could easily have been disallowed, the next step up in tennis’ penalty escalation, when he began yelling at Bernardes midway through the third set, immediately after he had double faulted to concede the crucial break.

Mind you, it wouldn’t have made much of a difference either way. Nadal scrambled into the next game without the slightest fuss, then held love in his final service game to complete his 7-6, 5-7, 6-4 victory in 2 hours and 45 minutes.

Having thus reached the semi-finals, Nadal has now won all 19 matches he has played this season. Already a three-time champion here in Indian Wells, he was mentally impregnable when it mattered most.

Kyrgios threw his racket again at full force late in the match, nearly hitting a ball boy, and was booed by fans as he walked off the court. But Nadal, in a touch of class, applauded his defeated rival.

This is one of the most riveting rivalries in the game, having gotten even spicier since Kyrgios told the No Challenges Remaining podcast in 2019 that Nadal was a “salty” loser.

Kyrgios won his first meeting at Wimbledon in 2014, when he was just 19 years old. But Nadal now leads the series by a 6-3 margin, having won their last three meetings.

Both players were desperate to win on Thursday, but they showed it in different ways. Nadal settled for the silent approach. For most of the match, he was below his best, perhaps as a result of chronic pain caused by the defective scaphoid bone in his left foot. But when he needed to find something extra, at the end of the first and third sets, he was able to increase the intensity of it.

Kyrgios, on the other hand, competed well for most of the match, only to fade in the most critical moments. He only dropped his serve twice all afternoon, but both times he went berserk, ranting not only at Bernardes but also at his own entourage on the court.

As always, in a match involving Kyrgios, there were many incidents. Even before the end of the third game, Kyrgios had already said that Nadal had been “lucky” after an unusual point in which two crosses found the court. He also complained that Nadal did not apologize for his good fortune by raising his hand in the traditional way.

With Nadal coming back from extremely deep position, Kyrgios attempted two underarm serves. The first was also a tweener serve between the legs. Nadal saw it coming and hit it for a winning comeback. The second, however, was so well placed that Nadal didn’t even bother to run towards him.

There was also an amusing exchange with a fan who was making more noise than Kyrgios would have liked. “Are you good at tennis?” Kyrgios asked the viewer. When the fan replied in the negative, Kyrgios continued: “Exactly, so why are you talking?” He then pointed at movie star Ben Stiller, who was sitting in the front row of the bleachers. “Do I tell him how to act? No.”