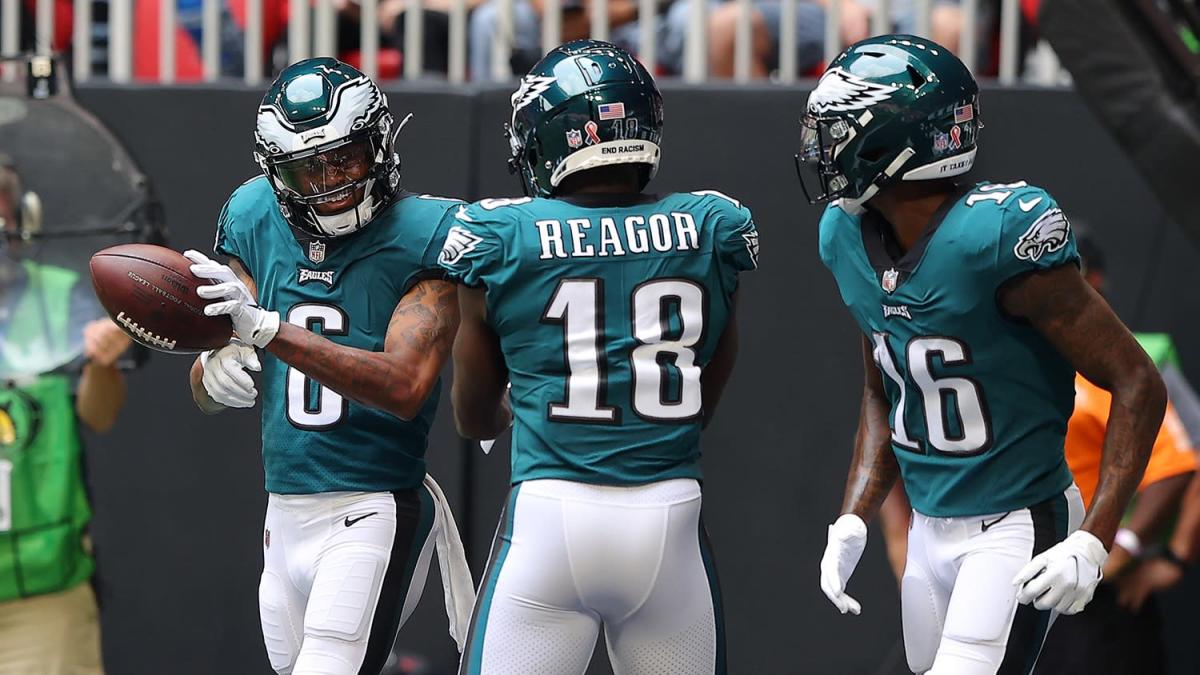 The Eagles finally added another free agent this week, but it wasn’t the touch people were hoping for at wide receiver.

They added veteran Zach Pascal. A move that will help, but a move that certainly didn’t move the needle.

Here are five thoughts on the state of the Eagles’ wide receiver position after the move:

Bottom line: this is not good enough.

The Eagles feel like they have their No. 1 receiver in Smith and that’s something we won’t argue with. The 2021 first-round pick had a very encouraging rookie season and will continue to grow. He is a star in the making.

But adding Pascal didn’t improve this receiving corps enough for him to feel comfortable with the group heading into the season. Watkins is still No. 2, which means Pascal will likely slide to the No. 3 receiver spot ahead of Reagor, who has obviously had a very disappointing career. The Eagles still need to try to add a receiver who can supplant Pascal from the starting lineup, either as the No. 2 in front of Watkins or the No. 3 behind him.

Either way, the Eagles really like Watkins (that’s not hot air), so he’ll play. That could be as an outside receiver opposite Smith or in the slot, where he played in 2021. But they need to add at least one more receiver.

It’s easy to rule out signing Pascal because he’s not an elite talent. His best seasons came in 2019-20, when he topped 600 yards every year. This was not the splash Eagles fans wanted. But he gave them something they were missing in the receiving room: a veteran.

In 2021, the Eagles had an extremely young receiving group. Ward was the oldest of the group and only a couple of years away from being a scrimmage player, and by the time the 2021 season rolled around, he was mostly retired from the offense.

During this offseason, Smith admitted that it would help to have a veteran around. Pascal has only four NFL seasons under his belt, but he’s now easily the most experienced receiver in the room.

And in addition to NFL experience, he has experience with Nick Sirianni; there is no doubt that Pascal is one of Sirianni’s favourites. Yes, Pascal is a limited player, but he knows exactly how Sirianni wants things done.

3. Bad news for Reagor and JJAW

This move isn’t good for Reagor or Arcega-Whiteside, both of whom have been drafted early in their careers.

For Reagor, the addition of Pascal represents a descent in the hierarchical order. And because, as we mentioned, Pascal isn’t good enough for the Eagles to rest, it means another player could come along. If the Eagles had added a star receiver like Christian Kirk, Reagor would have been knocked down, but the Eagles might be finished. Adding a player who might be a bit ahead of Reagor keeps open the very real possibility that another addition is on the way. Because of his cap status, Reagor is still unlikely to be cut, but his playing time will be affected.

For JJAW, it’s bad news because their spot on the roster isn’t as strong financially as Reagor’s. Cutting Reagor would leave the Eagles with a larger salary cap, while cutting JJAW would actually save the Eagles over $1 million in cap space. That’s not a crazy amount, but they won’t feel obligated to keep it up for financial reasons. And Pascal (6-2, 214) is considered a good blocking receiver. After the season ended, Sirianni called JJAW the receiving corps “enforcer” and praised them for doing the dirty work in the running game. That job is probably going to Pascal now.

4. Looking towards the comp?

The Eagles have used first-round picks at wide receiver in consecutive drafts. They missed Reagor but hit Smith. It would seem crazy for them to use another first round on a receiver, but it shouldn’t be out of the question. Failing on picks like Reagor and JJAW can’t stop the Eagles from trying again.

There are some intriguing first-round options like Treylon Burks, Garrett Wilson, Drake London, Jameson Williams and Chris Olave. But even if the Eagles don’t use one of their three first-round picks on a receiver, I’d still hope they catch at least one by Day 2.

There will be attractive receiver options when they are clocked at No. 51 in the second round and No. 83 in the third round.

5. Can you still add another veteran?

The Eagles might have wanted to sign a big-name free-agent wide receiver, but the contracts were extravagant this offseason. It’s not Howie Roseman’s style to overpay. Now that we’re hitting the second and third waves of free agency, there are still some decent names out there. Perhaps the Eagles can add a veteran once the numbers drop a bit.

There is also the possibility of an exchange. The Eagles tried to trade Calvin Ridley, but then Ridley was suspended by the NFL for gambling on NFL games. Roseman is always willing to trade and there are some players who could be potential targets. There are a couple receivers in Seattle (Tyler Lockett, DK Metcalf) worth looking at and maybe Brandin Cooks in Houston would be worth looking at, too.